(One of the Greatest Jazz Composers & Bandleader)

Edward Kennedy "Duke" Ellington was an American jazz pianist, composer, and bandleader. He is regarded as one of the greatest jazz composers and a prolific performer of his time. Most of his musical works on instruments set standards for others, which were later adapted into songs. This renowned jazz musician exhibited his excellence in film scores and classical compositions too. Considered a very important personality in the history of jazz music, he liked to call his music ‘American Music’ instead of jazz. A bandleader, pianist and a composer, Ellington was nicknamed ‘Duke’ by his childhood friends for his gracious and well-mannered behavior. He was truly a genius in the sense of instrument combinations, arranging jazz and improvising music that made Ellington stand unique among other composers of his time. His reputation as a composer and bandleader is intact even after his death. He collaborated with many others and wrote more than one thousand compositions and many of his extant works became a standard in jazz music. Ellington and his orchestra saw a major career revival after an appearance at the Newport Jazz Festival, Rhode Island, in July 1956. He recorded for most American record companies of his time and performed in several films and composed several stage musicals. With his creative genius, Ellington elevated the perception of jazz to an art form on a par with other traditional musical genres. American Celebrities
Composers
American Men
Male Pianists
Male Composers
Childhood & Early Life
Edward Kennedy "Duke" Ellington was born on April 29, 1899, in Washington D.C. His father James Edward Ellington and mother Daisy Kennedy Ellington were pianists. His father played operatic arias while parlor songs were his mother’s first choice.
They stayed with his maternal grandparents at 2129 Ida Place which is now called Ward Place, NW in the West End neighborhood of Washington, D.C.
When Ellington was 7 years old, he began his piano training. He took lessons for the same from Marietta Clinkscales.
His friend Edgar McEntree gave him the nickname of “Duke” because of his casual and graceful manner and the dapper dress that he wore. He pursued his education from Armstrong Technical High School in Washington, D.C.
He was very fond of playing baseball. The first job that he did was of selling peanuts at Washington Senators baseball games.
In the summer of 1914, he wrote his first composition "Soda Fountain Rag" that is also known as the "Poodle Dog Rag" while he was working as a soda jerk in Poodle Dog Café.
He drew inspiration from many piano players namely Phil Wurd, Caroline Thornton, Luckey Roberts, Turner Layton, Gertie Wells, Clarence Bowser, Sticky Mack, Harvey Brooks, Claude Hopkins, Eubie Blake, Doc Perry, Cliff Jackson, Joe Rochester, Lester Dishman, Louis Brown and Blind Johnny.
He began listening and imitating ragtime pianists in Washngton D.C and also those who hailed from Atlantic City and Philadelphia. He got private lessons in harmony from Henry Lee Grant, a music teacher at Dunbar High School. With the additional guidance that he received from the pianists in his home town and from band leader Oliver "Doc" Perry, he inculcated a better understanding of the instrument, learned to read music sheets, improved his technique and projected a professional style.
In 1916 he opted out of an art scholarship to the Pratt Institute in Brooklyn for the sake of music and he also dropped out of Armstrong Manual Training School, where he was studying commercial art, just three months before his graduation.
In 1917 he started working as a freelance sign-painter and simultaneously began his hunt for bringing in together groups that could play for dances. In 1919 he met Sonny Greer who was a drummer from New Jersey. He started building his music business through sign painting. Whenever someone asked him to make a sign for a dance or party, he enquired if they had arranged for music and offered to play for them.
In late 1917s he formed his own group “The Duke's Serenaders". The very first performance that he gave was at the True Reformer's Hall, from where he earned 75 cents.
Ellington’s music and his band thrived and played throughout Washington, D.C. and Virginia. He usually played for embassy and private parties.
His band included Sonny Greer on drums, his childhood friend Otto Hardwick on alto saxophone, Elmer Snowden on banjo and Arthur Whetsol on trumpet. They performed for both African-American and white audiences which was quite rare in those times. 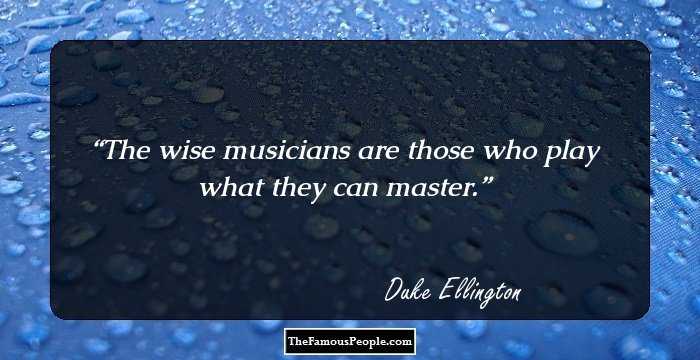 Quotes: Music
Continue Reading Below
Career
When Ellington’s drummer Sonny Greer joined the Wilber Sweatman Orchestra in New York City, he decided to leave behind his successful career in Washington, D.C., and moved to Harlem.
After some time the young musicians left the Sweatman Orchestra to form their own, they faced a highly competitive emerging jazz scene that was hard to crack. After some time, the young musicians felt discouraged and returned to Washington, D.C.
In June 1923, a gig in Atlantic City, New Jersey, proved lucky for the group and got them a chance to play at the prestigious Exclusive Club in Harlem.
Initially, the group was known as ‘Elmer Snowden and his Black Sox Orchestra’ but after some time they renamed themselves ‘The Washingtonians’. In 1924, Snowden left the group and Ellington became the bandleader. After a fire incident, the club re-opened as the Club Kentucky.
By the end of 1924 Ellington made eight records among three of which received composing credit, which included, ‘ChooChoo’.
In 1925, he contributed four songs to Chocolate Kiddies starring Lottie Gee and Adelaide Hall, which introduced European audiences to African-American styles and performers. By now Ellington’s Kentucky Club Orchestra grew to a group of ten players and they developed their own unique sound.
October 1926 was a turning point in his career when he made a career-advancing agreement with agent-publisher Irving Mills. This agreement with Mills allowed him to record prolifically, which, in turn, brought popular recognition to Ellington.
In September 1927, King Oliver's (American jazz cornet player and bandleader) refusal to play as the house band at Harlem's Cotton Club landed the deal in Ellington's favor and weekly radio broadcasts from the club gave Ellington national exposure. From there on he never looked back.
He was not a strict disciplinarian and used charm, humor, flattery, and astute psychology to maintain control of his orchestra.
Continue Reading Below
With the Great Depression worsening, the recording industry too was hit by the financial crisis and that resulted into dropping of over 90% of artists by the year 1933. In the case of Ellington’s Orchestra, radio exposure helped maintain popularity and his orchestra began to tour. Some records of this era include: "Mood Indigo", "Sophisticated Lady", "Solitude", and "In a Sentimental Mood".
In the early 1930s, the band's audience in America was mainly the African-American community but it had a huge following overseas, exemplified by the success of their trip to England and Scotland in 1933 and their 1934 visit to the European mainland.
His fame rose higher in the 1940s when he composed some of his masterworks, including "Concerto for Cootie," "Cotton Tail" and "Ko-Ko."
Some of Ellington’s most popular songs were "It Don't Mean a Thing if It Ain't Got That Swing," "Sophisticated Lady," "Prelude to a Kiss," "Solitude," and "Satin Doll" and many of his popular songs were sung by Ivie Anderson, a favorite female vocalist of Duke's band.
He also wrote many great and popular songs as “Sophisticated Lady,” “Rocks in My Bed,” and “Satin Doll”; “Don’t Get Around Much Any More,” “Prelude to a Kiss,” “Solitude,” and “I Let a Song Go out of My Heart”.
Ellington's career got a revival after his band’s performance at the Newport Jazz Festival on July 7, 1956. It returned him to wider prominence and introduced him to a new generation of jazz fans. Ellington’s concert at the festival made international news and resulted in an album that would become the best-selling long-playing recording of Ellington's career.
In his last decade, Ellington composed three pieces of sacred music – In the Beginning God , Second Sacred Concert, and Third Sacred Concert.
After the Second World War, his band often toured Europe and also played in Asia, West Africa, South America and Australia, besides frequently touring North America.
His autobiography ‘Music Is My Mistress’ was published in 1973. Ellington received as many as 12 Grammy awards - nine while he was alive.
Continue Reading Below 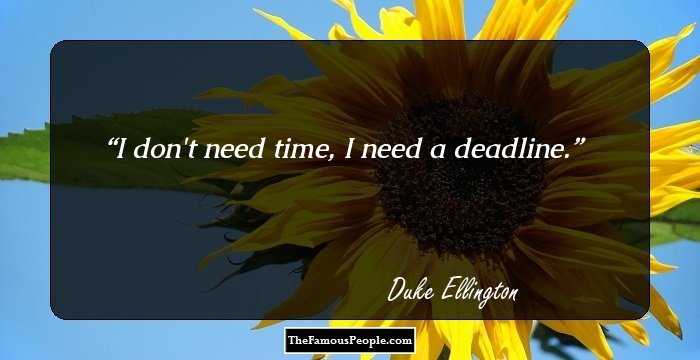 Quotes: Time, Need, I
Personal Life & Legacy
Ellington married his high school sweetheart Edna Thompson on July 2, 1918 at the age of 19.
On March 11, 1919 they were blessed with a baby boy, their first and only child. They named him Mercer Kennedy Ellington.
They parted ways in late twenties and in the year 1928 Mildred Dixon became Ellington’s companion and managed his company and travelled with him on his tours.
In 1938, he left his family and started living with Beatrice "Evie" Ellis, who was a Cotton Club employee.
In early 1960s he got close to Fernanda de Castro Monte.
Tempo Music was later run by Ellington’s sister Ruth and his son played piano and trumpet and formed his own band which he also led. He was also his father’s business manager and after his death he controlled the band.
Ellington died on May 24, 1974, due to pneumonia and lung cancer.
He was entombed in the Woodlawn Cemetery, The Bronx, New York City. His last words were, "Music is how I live, why I live and how I will be remembered.”
Continue Reading Below
After his death, his band was controlled by his son, and they continued to release albums even after his death. “Digital Duke” won Grammy Award for Best Large Jazz Ensemble Album in 1988 and the credits for the same were given to ‘The Duke Ellington Orchestra’.
A number of memorials are dedicated to Ellington in Washington D.C, New York and Los Angeles.
Duke Ellington School of the Arts in Washington D.C provides education to students who aspire to consider career in arts. This school was originally build in 1935 and named the Calvert Street Bridge. It was, however, renamed as Duke Ellington Bridge in 1974.
Duke Ellington Building at 2121 Ward Place, NW got a bronze plaque attached to it in 1989.
In 2010, a park was named after him across the street from his birth site named Duke Ellington Park.
A coin featuring Ellington was launched on February 24, 2009, in the United States. He became the first American-African to be featured on a circulating coin in the US.
The West 106th Street where he lived for years was named as Duke Ellington Boulevard after his death.
The prestigious high school bands participate in a well-known annual competition named Essentially Ellington High School Jazz Band Competition and Festival.
Ellington was listed in the list of 100 Greatest African-American by scholar Molefi Kete Asante in 2002.

Quotes By Duke Ellington | Quote Of The Day | Top 100 Quotes

See the events in life of Duke Ellington in Chronological Order