Tom Waits, born as Thomas Alan Waits, is an American singer and actor famous for his unconventional songs in music genres such as, blues, jazz and vaudeville. Blessed with a distinctive voice that is intoxicating, gravelly and mellow, all at once, he easily carved a niche for himself in the booming music scenario in the America of the 1970s. Along with singing and acting, this talented guy also composes music and writes songs. Never one to adhere to traditions, Waits experimented with different music styles and acting roles, though he also loved to perform conventional ballads. He has a deep love for his profession and has been singing for over four decades now. Because of its unconventional nature his music has received mixed reviews in the United States though he has managed to earn himself a devoted cult following all over the world. His fascination with music started in childhood when he would play music on his neighbour’s piano. He was a great fan of musicians like Bob Dylan, Lord Buckley, Jack Kerouac, and Louis Armstrong. Even though he greatly admired these musicians, he never attempted to imitate any of them—he was more interested in developing his own style that would distinguish him from the other musicians. Weird Al Yankovic
DID WE MISS SOMEONE?
CLICK HERE AND TELL US
WE'LL MAKE SURE
THEY'RE HERE A.S.A.P
Quick Facts

American People
Lyricists & Songwriters
American Men
California Musicians
Male Musicians
Childhood & Early Life
He was born on 7 December 1949 to Alma Fern McMurray and Jesse Frank Waits in California. Both his parents were schoolteachers who divorced when Tom was young.
He learnt to play the piano at his neighbour’s house and used to travel to Mexico with his father. His exposure to Mexican music at a young age kindled in him a love for all things musical.
He attended Hilltop High School and started playing in local bands. He wanted to be a musician, but was unimpressed by the musical scene in the 1960s; he wanted to do something different. 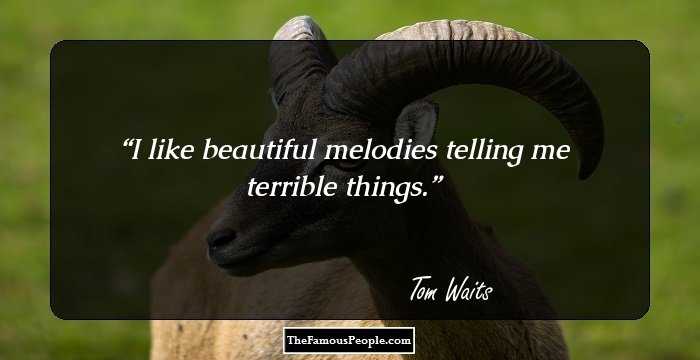 Quotes: Me, Like, Beautiful, I
Continue Reading Below
Career
His musical career began when he was working as a doorman at the Heritage nightclub in San Diego. He got a chance to play his first gig there for which he was paid $6.
He moved to Los Angeles in 1971 and brought out his debut album, the folk influenced ‘Closing Time’ in 1973. The album with its eclectic mix of songs was reviewed very positively by the critics.
He toured a lot over the next few years and also became an alcoholic. His 1976 album, ‘Small Change’ featured somewhat gloomy songs and presented a pessimistic mood.
His 1980 album, ‘Heartattack and Vine’, was his first album to enter the Australian Top 40, reaching 30. By now he was popular not just in the US but also gaining fame in other countries around the world.
During the 1980s he branched out into films and collaborated with Francis Coppola and appeared in Coppola’s movies ‘The Outsiders’ (1983), ‘Rumble Fish’ (1983), and ‘The Cotton Club’ (1984) playing cameos.
Along with his wife Kathleen Brennan he created the musical play ‘Franks Wild Years’ that premiered as an Off-Broadway musical in 1986. He played the lead role himself. The play had a successful run.
He collaborated with theatre director Robert Wilson and writer William S. Burroughs to cerate the avant-garde musical ‘The Black Rider: The Casting of the Magic Bullets’, in 1990.
In 1993, he brought out the album ‘The Black Rider’ which Waits had written for the eponymous play. Another album, ‘Mule Variations’ was released in 1999 after a gap of six years. He toured extensively after the release of this album.
He released two albums simultaneously in 2002—‘Alice’ and ‘Blood Money’. The songs in both the albums had been written years ago and were based on theatrical collaborations with Robert Wilson.
Continue Reading Below
Tom Waits is considered to a musician’s musician as several other artists have performed various cover versions of his original songs. His most recent album is ‘Bad as Me’ (2011) which was a critical success and received a Grammy Award nomination. 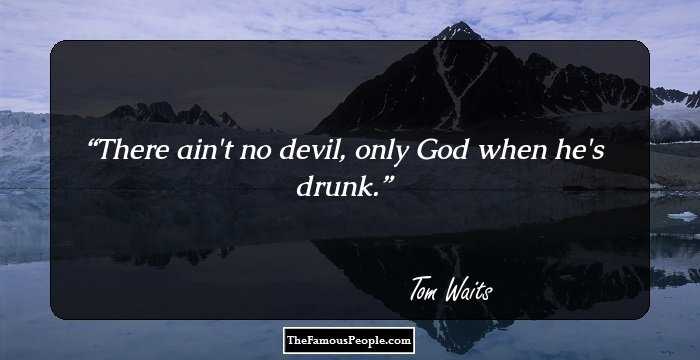 Quotes: God
Major Works
His 1976 album, ‘Small Change’ was his first major hit. He was going through a difficult period when was working on the album and thus the songs have melancholy undertones. The album went gold in both Australia and the UK.
Rain Dogs’, counted among the best albums of the 1980s was an album about the “urban dispossessed” of New York City. Known for its broad spectrum of musical styles and genres, it was a hit in Canada and the US.
His Grammy Award winning album, ‘Mule Variations’ was an international hit, charting in 14 countries over the world, peaking at No. 1 on Norway’s album chart. It was accredited gold in the US and Canada.
Awards & Achievements
His album, ‘Bone Machine’ (1992) won a Grammy Award for Best Alternative Album.
He won the Grammy Award for Best Contemporary Folk Album for ‘Mule Variations’ in 2000.
Waits was inducted into the Rock and Roll Hall of Fame in March 2011 by Neil Young in a ceremony held at Waldorf-Astoria. 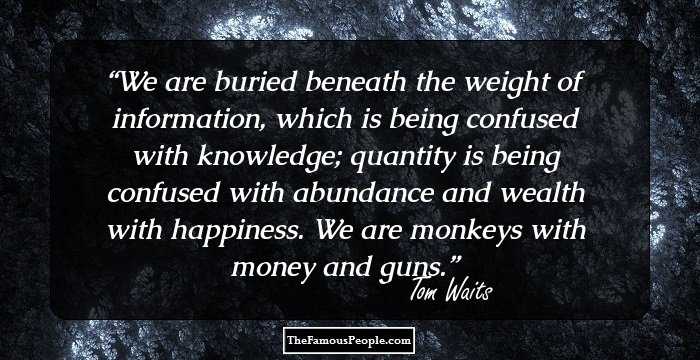 Quotes: Money
Personal Life & Legacy
He married Kathleen Brennan, a screenwriter, in August 1980 and became the proud father of three children. His wife has been his biggest support system and collaborator. The couple remains as close as ever even after several years of marriage and Waits calls himself a lucky man.

See the events in life of Tom Waits in Chronological Order