The founder of ‘The Catholic Worker’, Dorothy Day was an activist who worked for social causes like women’s suffrage and pacifism. She started off as a journalist, writing for several progressive publications and then participated in several political protests where she advocated a number of societal causes. A devoted Catholic, she spawned the ‘Catholic Worker Movement’ and also helped establish homes for those in need. She dedicated most of her life to humanitarian causes, driven by her beliefs and adopted faith. Recognized as an influential ‘peace and justice’ activist in a number of countries including Cuba, Italy and the U.S.S.R, she often associated herself with the radical fusion of activism and faith and worked towards the upliftment of women. Although she was denied the Nobel Prize, she continued the pacifist movement with great zeal and was thus formally proclaimed as a ‘Servant of God’. She has documented her tough upbringing and isolation for many years, in one of her best-seller books, ‘The Long Loneliness’. As a youngster, she developed a keen interest in literature, worked as a journalist with a local newspaper and became one of the lead catalysts of a monumental movement. If you would like to learn more about her life and achievements, scroll further.
Continue Reading Below American Celebrities
Journalists
Women's Rights Activists
American Women
University Of Illinois
Childhood & Early Life
Dorothy Day was born to John Day and Grace Satterlee in Brooklyn, New York. She was raised in San Francisco and Chicago and spent most of her childhood living in isolation.
She was an avid reader as a child and became particularly interested in anarchist communistic beliefs. She joined the University of Illinois at Urbana-Champaign on scholarship, but dropped out a couple of years later and moved to New York City.
Her parents were nominal Christians and she showed remarkable faith in the Bible from a very young age.
While in college, she abstained from social gatherings and insisted on supporting herself rather than relying on her family. As an adult she participated in a number of protests and even worked with socialist publications like ‘The Liberator’. 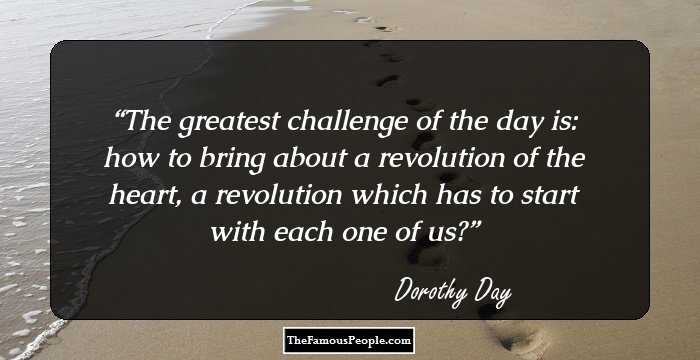 Who Is The Most Popular BTS Member?
Career
In the late 1920s, Dorothy Day went through a phase of spiritual awakening, which eventually led her to embrace Catholicism. In December 1927, she was baptized at ‘Our Lady Help of Christians Parish’ on Staten Island.
In 1929, she left New York and worked as a screen-writer in Hollywood for a brief period of time. As the ‘Great Depression’ began to set in, she started writing for Catholic publications like ‘America’ and ‘Commonweal’.
She founded ‘The Catholic Worker Movement’ with the first publication of the ‘Catholic Worker’, issued on May 1, 1933. It was published to promote Catholic social teachings and the pacifist ideology and became an instant-hit with the masses.
In the 1940s, she became a Benedictine oblate and was introduced to spiritual practices, which she retained for the rest of her life.
She recorded her experiences with her lovers, children, marriage and religion in her 1952 autobiography, ‘The Long Loneliness’.
By the 1960s, her ideology were embraced by a number of Catholics and she also earned the praise of a number of counterculture leaders. She strongly opposed the sexual revolution of 60s and worked towards the progression of society and economy.
Even towards the end of her life, she consistently voiced her opinions on a number of issues including nuclear weapons, the Vietnam War and the United Farm Worker’s unionization of migrant workers.
She worked to build homes for the poor during the 1970s and even worked for social justice for the impoverished.
Despite suffering from a poor health, she travelled around the world to spread the message of ‘God’ and met Mother Teresa in India.
Continue Reading Below
On August 6, 1976, she made her final public appearance at the Eucharistic Congress in Philadelphia. 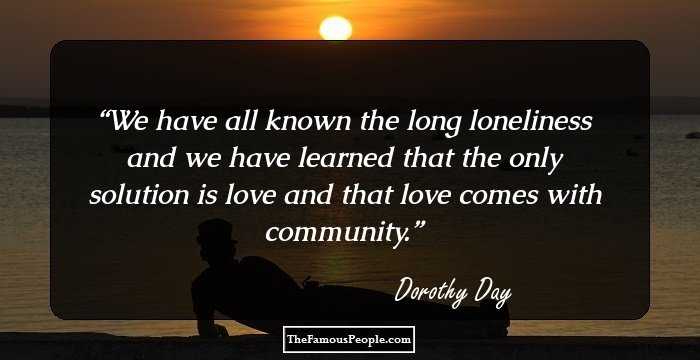 Quotes: Love
Major Works
Dorothy Day was the founder of ‘The Catholic Worker’, a newspaper published seven times a year by the ‘Catholic Worker Movement’, a guild of Catholics. It appeared on May 1, 1933 for the first time and by 1936 over 1, 50,000 issues were published.
The ‘Catholic Worker Movement’, initiated by her spread to a number of countries like Canada and the United Kingdom and by 1941, 30 independent Catholic Worker movements were already in existence.
Awards & Achievements
Dorothy Day was awarded the ‘Pacem in Terris Award’ in 1971, in recognition of her achievements in peace and justice across the world.
She was awarded the Laetare Medal from the University of Notre Dame in 1972 in recognition of her outstanding service to the Roman Catholic church and society. 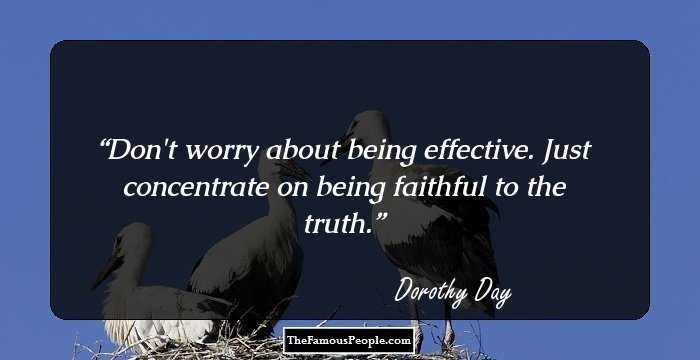 Personal Life & Legacy
She had an affair with Lionel Moise, a newspaperman. She later got married to Berkeley Tobey, however, the marriage was short-lived.
She authored a semi-autobiography; ‘The Eleventh Virgin’ which she regretted writing, later in her life.
She lived with the biologist, Forster Batterham, for some time and became pregnant with his child. Forster Batterham was against the idea of having children, which led to conflict between the two. However, she gave birth to a daughter, Tamar Teresa.
She suffered a heart attack and passed away on December 29, 1980 in New York City.
The first full-length documentary on her life ‘Dorothy Day: Don’t Call Me a Saint’ was premiered on November 29, 2005.
Her diaries ‘The Duty of Delight: The Diaries of Dorothy Day’ was published in 2008.
Today, the ‘Catholic Worker Movement’ is active in over 100 countries around the world, including Australia, Germany, Mexico and Sweden.
Trivia
In her early years this prominent activist led a Bohemian life, but later changed her way of living.
This social activist returned to America leaving Mexico City after contracting malaria.
The design of loaves and fishes and the words ‘Deo Gratias’ are engraved on her gravestone.
Recommended Lists:
Media Personalities #641
You May Like

Quotes By Dorothy Day | Quote Of The Day | Top 100 Quotes

See the events in life of Dorothy Day in Chronological Order