David Neeleman is one of the most successful and innovative entrepreneurs in airlines history. He has the unique achievement of starting four different airlines. Born in Brazil where his father was working as a foreign correspondent, he spent his early childhood in that country. The family moved back to the United States and Neeleman completed his studies there. He went back to Brazil as a Mormon missionary and vowed to go back again to do something for the people. While in college, Neeleman started a successful business of packaging timeshares and airline tickets for tours in Hawaii. After the business folded up, he was approached by June Morris to start a package tour business with her. They operated Morris Air Charters till it was bought over. Neeleman’s next venture was creating a paperless reservation system. This innovative system was later brought by HP. Neeleman then started his own airline company ‘JetBlue’ a budget carrier which stood out for its customer-service. Remembering the promise that he had made to himself in his youth, he started ‘Azul’ an airline connecting cities in Brazil which had no air connectivity. He also bought Portugal’s national airline along with his partners. Neeleman’s latest offering is an airline named ‘Breeze Airways’. This carrier will fly on routes that other airlines don’t and have the best customer-centered service. A combination that he believes will make it stand apart from all other carriers George Soros
Business People #1073
DID WE MISS SOMEONE?
CLICK HERE AND TELL US
WE'LL MAKE SURE
THEY'RE HERE A.S.A.P
Quick Facts

American People
Brazilian People
Cypriot
American,Brazilian,Cypriot People
Libra Entrepreneurs
American Entrepreneurs
Brazilian Business People
Libra Men
Childhood & Early Life
David Neeleman was born on October 16, 1959, in Sao Paolo, Brazil, to Rose and Gary Neeleman. His grandfather was from Holland and the family practices the Mormon faith. Neeleman’s father, Gary Neeleman, had gone to Brazil as a young missionary. He was so enchanted by the place that he went back to work and live in Brazil.
David Neeleman spent the first years of his life in Brazil where his father was a correspondent for United Press International. The family moved to Cottonwoods near Salt Lake City, Utah, United States when he was 5 years old. Here, Neeleman went to Brighton High School.
His grandfather owned grocery stores and by the age of 9 he was helping out at a store working at the cash register. He did not get a lot of time at school to do sports and other activities but these years laid the foundation of entrepreneurship and customer-service in him.
School was difficult for him as he struggled with the standardised school tests because of his dyslexia. His parents helped him overcome this challenge by highlighting the unique capacities that he had which others didn’t. For his higher studies, he went to the University of Utah but dropped out after 3 years.
At 19, as part of the Mormon tradition, he went on a mission to Brazil. He spent time with the downtrodden and people who had nothing. The experience made him decide to go back one day and do something to help the people there.
Continue Reading Below
You May Like

Famous Beautiful Women With Green Eyes
Career
While still in college, David Neeleman started his first business of selling timeshares for someone who owned condominiums in Hawaii. He soon had others coming to him with their timeshares.
He then got in touch with an airline which agreed to sell him tickets to Hawaii from Los Angeles. He combined these with the timeshares for the condominiums and created low-budget package tours.
He was still in college when he was making 6 million dollars a year. Eventually, he gave up college. Things went smoothly till late 1982 when the airlines with which he was partnering folded up. He lost all his money and had to close his business.
Neeleman started working as an accountant for his father-in-law in his Drapery business. He also went back to his grandfather’s grocery store to handle cash.
Neeleman’s uncle was the estate lawyer for the Morris family. June Morris was the owner of the largest travel agency in Utah. She proposed that they could work together, thus kickstarting his Hawaiian package tour business once again and starting direct chartered flights from Salt Lake City to Hawaii.
In 1984, he co-founded Morris Air with June Morris. Till1988, he was the executive vice-president of the company. In 1988, he became the president of Morris Air. Neeleman says Morris Air was the first company in the world to introduce the E-ticketing system. In 1993 Southwest Airlines acquired Morris Air. As part of the deal, Neeleman made $25 million.
As he had a non-compete clause with Southwest Airlines, Neeleman could not work for any other airlines for 5 years, He created Open Skies pioneering touch screen airlines reservation system. Hewlett Packard bought it in 1999. During this period, he also helped to find Westjet a Canadian airline.
Neeleman had observed the bad quality of service of America’s airlines where budget travellers suffered the most. His answer to this was ‘JetBlue’. Launched in 2000 this low-cost carrier gave the budget traveller high-quality air travel experience only available on expensive airlines.
David Neeleman would himself be on the ‘JetBlue’ flights. He always sat on the last row with non-reclining seats. He also helped in giving out snacks, cleaning the aircraft or stood at the gate collecting tickets from passengers.
Continue Reading Below
In the winter of 2007, an ice storm took place. Many airlines had to ground their planes.’ Due to mismanagement, ’JetBlue’ passengers were stuck in their planes for close to 10 hours. The incident cost Neeleman his position as CEO of the company and the board asked him to step down.
Neeleman had always wanted to go back to Brazil to make a difference there. He found that Brazil had many cities with no air connectivity. In 2008, he launched Azul Brazilian Airlines with the same ideologies as ‘JetBlue’ also with a similar name as ‘Azul’ in Portuguese means blue.
In 2015, Neeleman and a consortium of investors called ‘Atlantic Gateway’ took over the debt-ridden TAP Air Portugal from the Portuguese government. The consortium owns 45% shares in the company.
In 2020, he plans to launch ‘Breeze Airways’ an airline whose USP according to Neeleman is “niceness”. With this he hopes to bring humanity back in the airlines business.
Family & Personal Life
David Neeleman married Vicki Vranes in 1980. He was still in college then. He and Vicki have 10 children. They divorced in 2013.
In spite of his very busy life, he made sure that he was always home during weekends. He would work his schedule around for his children’s football matches and dance performances.
Neeleman’s brother was diagnosed with Attention Deficit Disorder, his mother suspected that Neeleman himself had the same issue. Neeleman read about the symptoms of ADD and self-diagnosed himself when he was 30.
Neeleman became a citizen of Cyprus in 2017. He now has citizenships of Brazil, United States and Cyprus.
Trivia
David Neeleman loves Indian Food. He was introduced to it by Richard Branson owner of Virgin Airlines.
You May Like

See the events in life of David Neeleman in Chronological Order 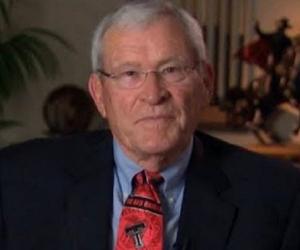