(Owner of the 'Dallas Mavericks' Team of NBA)

Mark Cuban is a well-known American businessman, investor, author, television personality, and philanthropist. Mark Cuban is said to have had a remarkable ability to sell even as a child. This innate talent helped him establish diverse businesses and succeed in every enterprise that he took up. Though he began his career in a modest manner, he went on to establish businesses in diverse fields, such as software, film distribution, investing in social startup companies, and owning the NBA basketball team ‘Dallas Mavericks.’ Most of his businesses were initiated at a time when the world was witnessing the internet boom, which he used to his advantage. Mark Cuban is popular for his talkative personality and voicing out unrestricted opinion both on and off camera. This has got him into trouble a number of times. He is an ardent fan of Russian-American novelist Ayn Rand. He has mentioned that reading the book ‘The Fountainhead’ allowed him to think as an individual, take risks to achieve success, and take responsibility for failures. This self-made billionaire is constantly on the lookout for new trend and technology that can help improve his business ventures. Tom Cruise
31st July In History
DID WE MISS SOMEONE?
CLICK HERE AND TELL US
WE'LL MAKE SURE
THEY'RE HERE A.S.A.P
Quick Facts 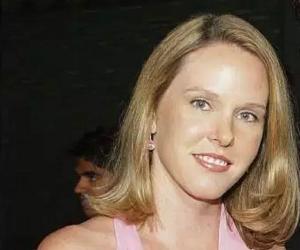 American People
Investors
Film & Theater Personalities
American Men
University Of Pittsburgh
Childhood & Early Life
Mark Cuban was born on 31 July 1958, in Pittsburg, Pennsylvania, USA, to Norton Cuban and Shirley. His father worked at a car upholstery shop.
As a child, he attended ‘Mount Lebanon High School’ at Pennsylvania. Even at a young age, he managed to earn money by doing part time jobs.
After his schooling, Mark Cuban enrolled at the ‘University of Pittsburg.’ However, after a year he transferred to ‘Indiana University’ in Bloomington. In 1981, he graduated with a Bachelor of Science in Business Administration. 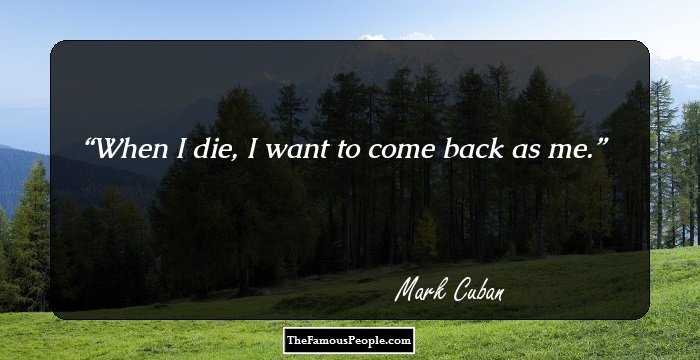 Quotes: Me, I
Continue Reading Below
Career
Mark Cuban had a flair for business from a young age. Even while studying at the ‘Indiana University,’ he had engaged himself in a variety of businesses like managing a pub, chain letters, etc.
In 1982, after graduation, he moved to Texas and began working as a bartender. He later went on to work as a salesperson for a personal computer software retailer chain named ‘Your Business Software’ in Dallas. Mark Cuban was fired from work within a year.
At this point, he founded a computer software consulting service called ‘Micro Solutions.’ His previous experience in this field gave him the knowledge and skills required to initiate the business. He started by reselling computer software. In 1990, he managed to sell the company to ‘CompuServe Information Service’ in a multimillion deal.
In 1995, he and Todd Wagner, an alumnus of ‘Indiana University,’ began ‘Audionet,’ an internet radio company. The idea for this business came from their combined interest in listening to ‘Indiana Hoosier’ college basketball games online. ‘Audionet’ was re-named ‘Broadcast.com’ in 1998. In 1999, ‘Broadcast.com’ assisted in the launch of Victoria’s Secret’s maiden live-stream fashion show. The company was acquired by ‘Yahoo!’ the same year.
After selling his company to ‘Yahoo,’ Mark Cuban invested his wealth in diverse businesses. In 2000, he purchased the NBA team ‘Dallas Mavericks.’ At the time, the team was suffering from poor management decisions, but when Mark Cuban became the owner, he took initiatives to boost the morale of his players. The team went on to perform well and in 2006 made it to the finals of the NBA. Subsequently, the team won the NBA title in 2011.
Mark Cuban, along with partner Todd Wagner, founded a media group named ‘2929 Entertainment’ in 2003. ‘2929’ co-produced a renewed version of the television show ‘Star Search’ that year. The same year, the partners purchased ‘Landmark Theatres,’ the largest movie theatre chain in the USA. Subsequently, film distributor ‘Magnolia Pictures’ became a subsidiary of ‘2929 Entertainment.’
In November 2003, Mark Cuban introduced ‘High Definition Television’ to the market; he was the co-founder of AXS TV, the primary HD satellite TV network.
In 2004, Mark Cuban, in collaboration with ABC Television, launched a reality series titled ‘The Benefactor.’ However, due to low ratings, the show went off air shortly after its launch. He also owned the Internet Search Engine ‘Ice Rocket’ which was launched in 2004. Apart from this, he was also a partner in the startup company ‘Red Swoosh,’ an initiative that allowed peer-to-peer file sharing. This company was later bought by ‘Akamai Technologies’ in 2007.
In 2005, he funded ‘Brondell Inc.,’ a US-based startup that made hi-tech closet seats. The following year, he invested in a website named ‘Sharesleuth.com’ that aided in revealing fraud and reducing the spread of false information.
Continue Reading Below
In 2007, ‘Mascot Books’ published his first children’s book ‘Let’s Go Mavs!’ He has also written an inspirational e-book titled ‘How to Win at the Sport of Business: If I Can Do It, You Can Do It.’
Mark Cuban’s other projects include ‘Bailoutsleuth.com,’ a website to oversee the US government’s bailout on financial institutions. Mark Cuban is also known to have funded the analytics company ‘Motion Loft.’
Cuban also invested in the e-sports betting platform ‘Unikrn’ in June 2015. The following year, he bought a principal ownership stake in the ‘Professional Futsal League.’ 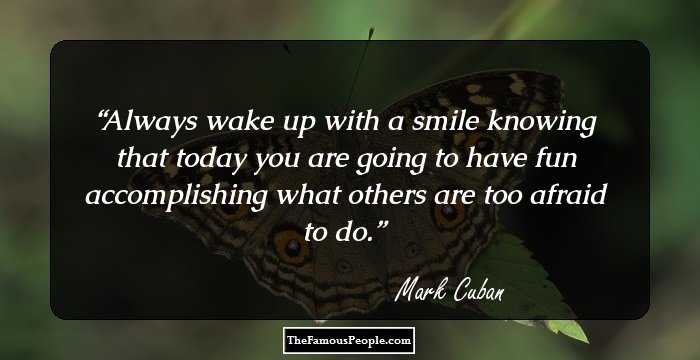 Quotes: You
Major Works
Mark Cuban is a self-made billionaire. He has made investments in diverse businesses ranging from technology-based startups to movie distribution.
Personal Life & Legacy
Mark Cuban married Tiffany Stewart in the year 2002 in Barbados. They have three children: Alexis Sofia (born 2003), Alyssa (born 2006), and Jake (born 2010). 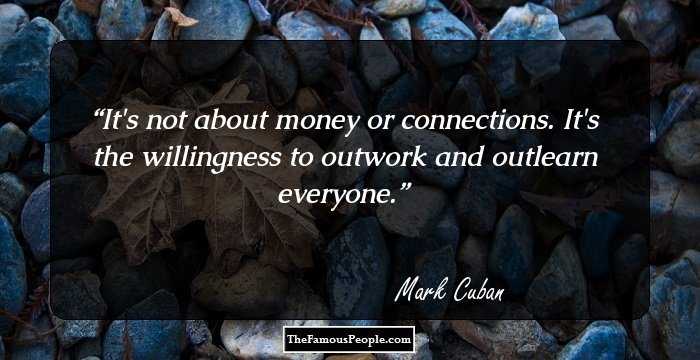 Quotes: Money
Philanthropic Works
In 2012, Mark Cuban donated money to a legal nonprofit organization called ‘Electronic Frontier Foundation’ in order to support their work.
‘The Mark Cuban Foundation’ initiated the ‘Fallen Patriot Fund’ that helps families of US military personnel who were either injured or killed during the ‘Iraq War.’
In 2015, he funded the technology center and basketball court for the ‘Indiana University’ at Bloomington.
Trivia
In 1999, Mark Cuban paid USD 40 million to his ‘Gulfstream V Jet’ and this transaction has been recorded as the single largest e-commerce transaction by the ‘Guinness Book of Records.’
Mark Cuban is the first NBA team owner to launch a blog; it contains his thoughts about technology as well as basketball and NBA.

See the events in life of Mark Cuban in Chronological Order