Daphne du Maurier was a famous English writer and playwright. Her best-known works are ‘Rebecca’ and ‘The Birds’, both of which have been adapted into films by Alfred Hitchcock. She was a prominent literary name in England and was the grand-daughter of the famed cartoonist, George du Maurier. Given her exposure to literary and art accomplishments during childhood, it is no surprise that du Maurier developed a great passion for literature from a tender age. She was captivated by make-believe worlds and even conceived an alter-ego for herself, ‘Eric Avon’. She attended a number of schools in Europe, before publishing a short-story as a teenager in the ‘Bystander’, a newspaper. Her major, full-length novel, ‘The Loving Spirit’, received widespread appreciation and brought her incredible literary success. British Celebrities
Playwrights
British Women
Taurus Writers
Women Writers
Childhood & Early Life
Daphne du Maurier was the second of the three daughters born to Sir Gerald du Maurier and Muriel Beaumont, in London, England. Her grandfather, who was an artist himself, inspired her to pursue an artistic/literary career.
From a very young age, she was nurtured and cared for by a governess, while she attended schools in London and Paris. It was around this time she wrote a short-story, which was published in a famous magazine, the ‘Bystander’. 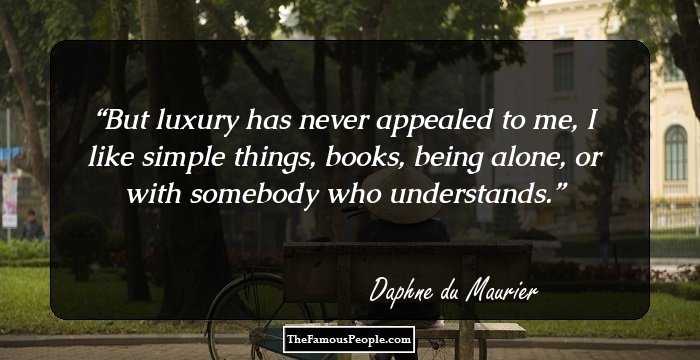 Quotes: Me, Never, Alone, Like, Books, I
Continue Reading Below
Career
Her first novel, ‘The Loving Spirit’ was published during her teenage years, in 1931, which brought her immediate literary success. It also brought her the romantic attention of Lieutenant Colonel Frederick who sailed halfway across the world to meet her and married her in 1932.
Thereafter, she wrote ‘The Progress of Julius’, ‘Jamaica Inn’ and ‘Rebecca’ through the 1930s, which catapulted her to great success. ‘Rebecca’ in particular hit the best-sellers shelves and made her a household name in England. The novel was even adapted for stage and screen several times, and was regarded a work of genius.
Apart from writing novels, she also wrote three plays throughout her career. The first was an adaptation of her novel, ‘Rebecca’, which opened on March 5, 1940.
Through the course of her career, she produced a number of other works including, ‘The House on the Strand’, ‘The King’s General’ and ‘The Scapegoat’.
She worked her plots around mysterious, supernatural themes and puttered with romantic themes, inspired by her own whirlwind extra-marital romance.
In 1941, she authored ‘Frenchman’s Creek’, which went on to become a huge literary success. She wrote her second play, ‘The Years Between’ and the third play, ‘September Tide’, opened on 15th December 1948.
She authored a string of novels through the 1950s including ‘Mary Anne’, ‘The Scapegoat’ and ‘The Breaking Point.
Through the 1960s she published works like ‘Castle Dor’, ‘The Birds and Other Stories’ and ‘The House on the Strand’.
Her short story collection ‘Not After Midnight’ was published in 1971 and a year later she published ‘Rule Britannia’.
Continue Reading Below
One of her most famous works ‘The Rendezvous and Other Stories’ was published in 1980. 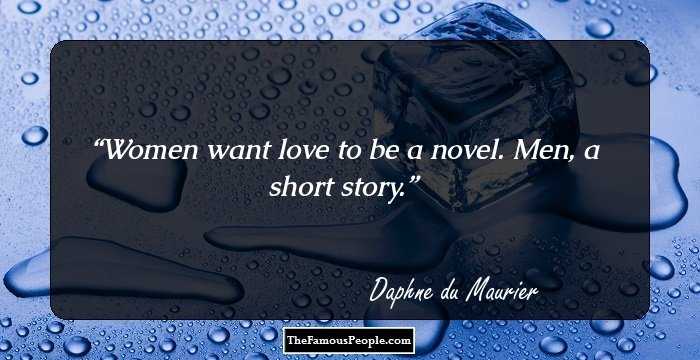 Quotes: Love, Women
Major Works
Du Maurier authored ‘Rebecca’ in 1938, which was adapted for a stage play and later into a movie. It is considered her best work and regarded a modern classic. Many songs like ‘She’s Fantastic’ and ‘Rebecca’ have been written after the novel. The book is considered her magnum opus and one of the adaptations of the same, won the prestigious Academy Award.
‘The Birds’, written in 1952, is a thriller, which won rave reviews from critics and readers for its engaging plot and characterization. The story was even adapted for a film of the same title, by award-winning director Alfred Hitchcock.
Awards & Achievements
She received ‘National Book Award’ by the American Booksellers Association, for her novel, ‘Rebecca’. 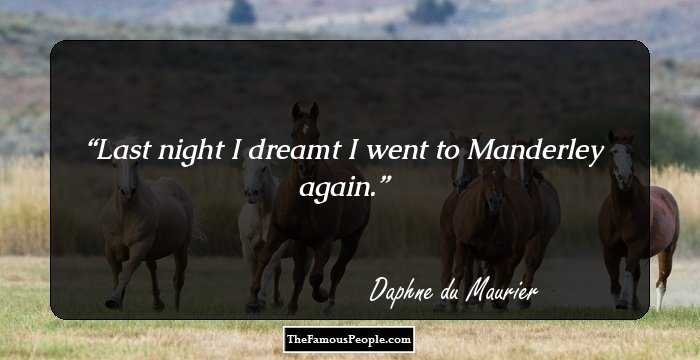 Quotes: I
Personal Life & Legacy
She married Lieutenant General Frederick in 1932 and had three children with him. She was married to him for 33 years before she started distancing herself from him. Many believe it was because she engrossed herself in writing, while others speculate about her bi-sexuality and extra-marital affairs.
She died at the age of 81 in her house in Cornwall. Following her death, secrets about her sexual encounters with an English actress, Gertrude Lawrence and Ellen Doubleday began to spread.
In August 1996, her name featured in the list of five women who were selected for a range of British stamps titled ‘Women of Achievement’.
Trivia
This famous author’s novel ‘Rebecca’ was set in a 70-room manor, which actually exists today and is called the ‘Menabilly’. She was awestruck by the building as a child and wrote the novel based on the same setting.