David Llewelyn Wark ‘D.W.’ Griffith is amongst the first few directors of the American cinema who brought in revolution through his ideas and directorial techniques in the motion pictures of his time. He was born and brought up in Kentucky by his family with an Army background. His father died when he was very young and he had to discontinue his studies to support his family. He started writing plays but he soon discovered that making movies was a more lucrative option and made movies like ‘The Birth of a Nation’ and ‘Intolerance’. Both the movies were highly controversial - former for its negative depiction of black Americans and latter for trying to portray the biasness and prejudices through different historical eras. He made many movies but none of them achieved success like these two and his association with various production houses was dissolved due to his lack of creating commercially successful movies. Griffith was a man of vision and bold ideas and is considered to be an icon from the times when cinema was developing in the US.

American Celebrities
T V & Movie Producers
American Men
American Directors
American TV & Movie Producers
Childhood & Early Life
Griffith was born in Crestwood, Kentucky, to Mary Perkins and Jacob Griffith. His father was a colonel and served in the American Civil War and became a Kentucky state legislator.
Griffith was schooled at home by his elder sister Mattie Griffith. His father passed away when he was only 10 years and the family was struck with poverty. He had to drop out of school to take up a job to support his family. 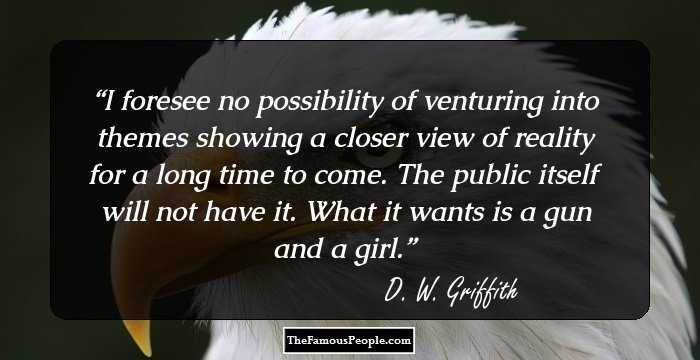 Quotes: Time, Will, I
Continue Reading Below
Career
In 1907, Griffith tried to sell one of his scripts to a producer in New York. His script was not accepted but he was given a small role to play in a movie called ‘Rescued from an Eagle’s Nest’.
In 1908, having been smitten by the world of motion pictures, he accepted an acting offer by American Mutoscope and Biograph Company, New York City. He made his first movie ‘The Adventures of Dollie’.
By 1914, he was convinced that making motion pictures is a lucrative business and he directed and produced a movie called ‘Judith of Bethulia’. It was one of the earliest movies produced in the USA.
He developed creative differences with his company Biograph and decided to leave the company and join the Mutual Film Corporation with his actors. He formed the Reliance-Majestic Studios and hired Harry Aitken as his manager.
In 1915, he produced the movie ‘The Clansman’, which he called ‘The Birth of a Nation’ later. It was one of the first blockbusters ever and first feature length film made in America.
‘The Birth of a Nation’ was a huge hit amongst its audience and changed the face of cinema. It was controversial in nature due to its portrayal of Slavery during the Civil War.
In 1916, he directed a film called ‘Tolerance’. It was a silent movie which portrayed many storylines, all set in different eras of prominence. It was a high budget film which failed to prove itself commercially.
In 1917, Griffith formed partnership with first Artcraft and then First National. He formed United Artist with Charlie Chaplin, Mary Pickford and Douglas Fairbanks.
From 1919 to 1924, he made movies like ‘Broken Blossoms’, ‘Way Down East’, ‘Orphans of the Strom’, ‘Dream Street’, ‘One Exciting Night’ and ‘America’ and ‘Isn’t Life Wonderful’.
Continue Reading Below
In 1929, Griffith spoke on the radio show “The Dodge Brothers Hour”, along with other artists like Fairbanks, Pickford, Chaplin, John Barrymore, etc., over the issue whether or not he could make talking movies.
In 1929, he directed the movie ‘Lady of the Pavements’. It was a semi-talkie movie and he made two sound films ‘Abraham Lincoln’ and ‘The Struggle’ but they failed at the box office and he never directed a movie again.
In 1936, he helped shoot a famous earthquake sequence for the film ‘San Francisco’ for Woody Van Dyke, who worked with him in ‘Intolerance’, but he never received any commercial credit for his work.
In 1930 and 1940, he produced movies like ‘Of Mice and Men’ and ‘One Million B.C.’, on the request of Hal Roach. He also directed some of the scenes of these movies. He actively involved himself in the production process.
Awards and Achievements
In the 1930s, Griffith was awarded an Oscar by the Academy of Motion Pictures Arts and Sciences for his contribution to American cinema and making movies like ‘The Birth of a Nation’.
Personal Life & Legacy
In 1948, Griffith was found unconscious in the lobby of a hotel in Los Angeles and died of a cerebral hemorrhage. His public service was held at the Hollywood Masonic Temple but not many celebrities came to pay their respects.
In 1975, a ten cent postage stamp was dedicated in honor of Griffith and the Directors Guild of America created its highest award in his honor, called the D. W. Griffith Award.
Trivia
His career was depicted in the TV series called ‘Philco Television Playhouse’.
Hollywood Heritage Museum hosted the screenings of his movies to showcase his contribution to the American cinema.
Oldham History Center in La Grange, Kentucky, has built a theater in his honor. It also has a library that contains all his films.
His films have been preserved by the National Film Registry, United States.
Once when Griffith visited the set of the film ‘Duel in Sun’ where many of his old associates and actors were present, he was asked to leave the location because his presence disturbed his veteran actors.
Recommended Lists:
Film & Theater Personalities #3167

See the events in life of D. W. Griffith in Chronological Order