DID WE MISS SOMEONE?
CLICK HERE AND TELL US
WE'LL MAKE SURE
THEY'RE HERE A.S.A.P
Popularity Index
Writers #1000
Novelists #151
Cyril Connolly
Quick Facts

David Thewlis
Cyril Connolly was an English literary critic and novelist best known for his autobiography, ‘Enemies of Promise’ in which he explained why he failed to achieve the heights of success he once aspired to reach. Written with his characteristic terse sense of humor, he jokingly blamed his own laziness for keeping him from becoming the great writer he was supposed to become. Ironically, it was this very piece of writing which later on became known as his masterpiece and cemented his place in literary history! Known to be an eccentric, Connolly managed to charm his friends and family with his quirky sense of humor that irritated them as much as it amused. The son of an army major, he traveled a lot in childhood and this experience helped to shape the young boy’s views about the world. He attended the same school as George Orwell and Cecil Beaton and the trio became good friends. Intelligent and knowledgeable, he gained the reputation for being an intellectual in college, though by his own accounts he was never overly ambitious. His only novel, ‘The Rock Pool’ was published in 1936 though it was his autobiography that came out a couple of years later that made him famous as a writer. Novelists
British Men
Eton College
Male Writers
Childhood & Early Life
He was born on 10 September 1903 as the only child of Major Matthew William Kemble Connolly and his wife, Muriel Maud Vernon. His father was an officer in the King’s Own Yorkshire Light Infantry while his mother was the daughter of a colonel.
He traveled a lot as a child due to his father’s profession and spent some of his childhood days in South Africa where his father was posted.
He went to St. Cyprian’s School in Eastbourne where he met the future interior designer Cecil Beaton and would-be novelist George Orwell. He became good friends with both of them.
He won a scholarship to attend Eton College. There he became involved in school politics and charmed everyone around him with his intellect and wit. He won the Rosebery History Prize in 1922 and earned the Brackenbury History scholarship to Balliol College, Oxford.
Before joining Oxford he decided to travel extensively and went to Germany, Austria and Hungary. He developed a taste for traveling and having fun with his friends and thus his academic career at Oxford suffered. He also got used to spending lavishly. He graduated in 1925 with a third class degree in history. 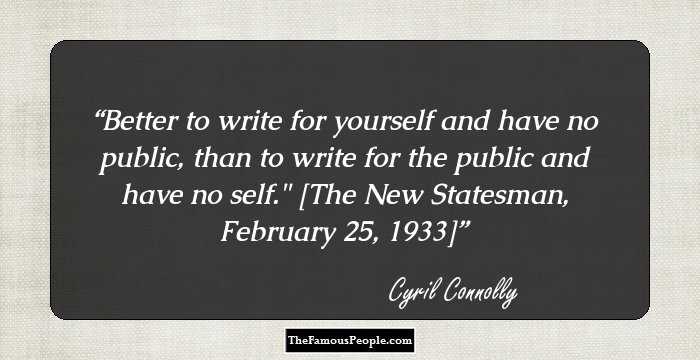 Virgo Writers
Male Novelists
British Writers
British Novelists
Career
He struggled to find employment after leaving college as he did not possess a good academic record. He had incurred a huge pile of debts due to his extravagant spending which complicated his life further.
Finally he found a job tutoring a boy in Jamaica and went to the Caribbean in November 1925. He returned to England after some months in April 1926. His struggle to find a secure job continued.
He was employed as a secretary for Logan Pearsall Smith, an essayist and critic, in June 1926. Smith had a house called “Big Chilling”. This job introduced him to literary life and influenced his thoughts as a writer. He was paid �8 a week for this role.
A chance meeting with Desmond MacCarthy, the literary editor of the ‘New Statesman’ led him to embark on a literary career. MacCarthy invited Connolly to write book reviews for the ‘New Statesman’.
His job with Smith took him to Spain and from there he set off on a tour of his own before returning to England. In June 1927, the ‘New Statesman’ published his first signed work, a review of Lawrence Sterne.
He was asked to become a regular reviewer in August 1927, an opportunity Connolly gladly accepted as he joined the staff of the ‘New Statesman’. The very next month, he wrote a review of ‘The Hotel’ by Elizabeth Bowen.
Along with his job, he also began working on his own books. He started writing a novel called ‘Green Endings’, a travel book on Spain and ‘A Partial Guide to the Balkans’. However, he never completed any of these.
He published his first novel, ‘The Rock Pool’ in 1936. The content of the novel was considered obscene in those days and he was having problems finding a publisher before he convinced Obelisk Press of Paris to publish it. Incidentally his first novel proved to be his only one.
In spite of being intelligent, highly knowledgeable and a respected literary critic, Connolly was never able to gain fame as a writer. It was this predicament which prompted him to write the autobiographical piece ‘Enemies of Promise’ in 1938 which ironically established him as a writer.
In 1940, he founded the literary magazine, ‘Horizon’ with financial help from Peter Watson. He edited the magazine till 1950. He became the joint chief book reviewer for the ‘Sunday Times’ along with Raymond Mortimer in 1952 and held the post until his death. 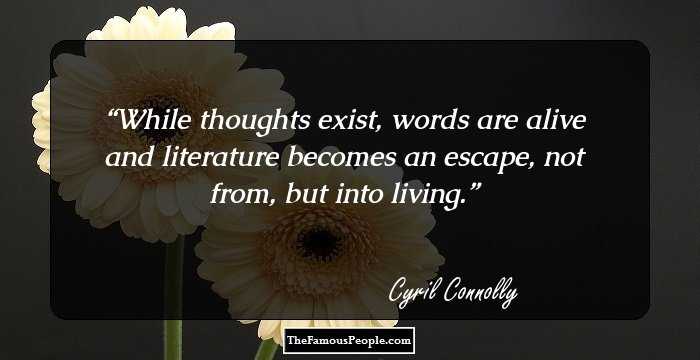 Virgo Men
Major Works
He is most famous as the author of the autobiographical work, ‘Enemies of Promise’. In this critical work, he tries to describe why, in spite of being a good writer he was unable to produce a major work of literature. This book is considered to be his masterpiece.
Personal Life & legacy
He married Jean Bakewell in 1930. She however left him in 1939. He married for the second time in 1950—this marriage too did not last long.
He tied the knot for the third time with Deirdre Craven in 1959. The couple had two children and remained together till Connolly’s death.
He died on 26 November 1974, at the age of 71. 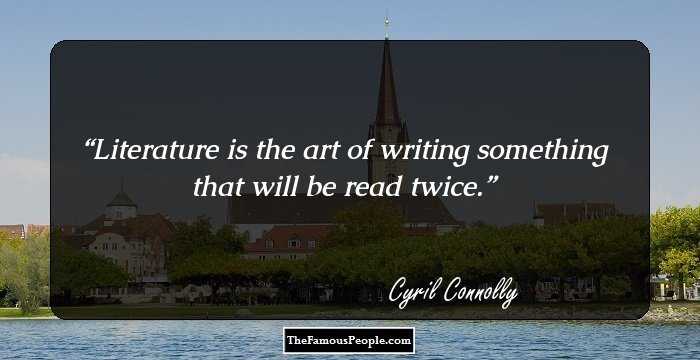 Quotes By Cyril Connolly | Quote Of The Day | Top 100 Quotes

See the events in life of Cyril Connolly in Chronological Order