Advanced Search
The story of Cesar Chavez, the Latino-American civil rights activist, is an extraordinary one. His famous words, ‘Si, se puede’ (Yes, it can be done) is pregnant with meaning and represents the cause that he fought for. The sacrifices he made in order to fight for the rights of farm workers and others using non-violent means, forms a story so intriguing and inspiring. It is believed that his frequent hunger strikes in order to fight for the rights of workers eventually led to his poor health and sudden demise. He recognized all too well the adversities farm workers repeatedly faced, which he himself experienced as a little boy. As a migrant farm worker, he would slog in the fields quite often so he knew the standards that were required in order for these farmers to live a comfortable and respectable life. His attitude to unionism and forceful yet non-violent tactics, made the farm workers’ struggle an honest cause with coast-to-coast support. Throughout his career, he led protests, called for embargoes and went on several hunger strikes. He became so famous for his cause that he earned the support of famous personalities including Jesse Jackson and Robert Kennedy. Sam Cooke
31st March In History
DID WE MISS SOMEONE?
CLICK HERE AND TELL US
WE'LL MAKE SURE
THEY'RE HERE A.S.A.P
Quick Facts

American Celebrities
American Men
Male Activists
American Activists
American Civil Rights Activists
Childhood & Early Life
Cesar Estrada Chavez was born into a Latin-American family in Yuma, Arizona. His family was into the ranch business and they also owned a grocery store, however, all their businesses were lost during the Great Depression.
The family moved to California, where they faced a number of problems, while settling as migrant farm workers. He quit school in 1942, when he was in 7th grade, because he wanted to help his mother in the fields.
In 1944, he enlisted in the United States Navy and served the same for two years. However, later in life, when he looked back at this time, he deemed it as the ‘worst two years of his life’. 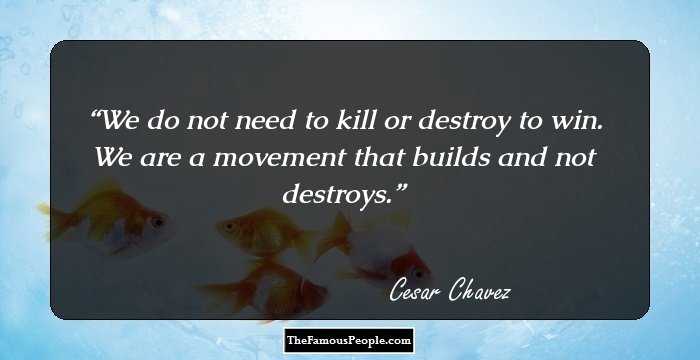 Quotes: Need
Continue Reading Below
Career
Once he got out of the Navy, he worked in the fields until 1952. It was during this period that he became the organizer for the ‘Community Service Organization’, a civil rights group. Six years later, he became the CSO’s national director.
In 1962, he co-founded ‘National Farm Workers Association’ with Dolores Huerta. The organization was later renamed to ‘United Farm Workers’. He also supported the ‘Delano grape strike’, by Filipino American farm workers who fought for higher wages, three years later.
In 1965, along with the NFWA, he led a strike of California grape pickers on the momentous farmhands march from Delano to California state capitol in Sacramento for parallel goals. This strike persisted for five years and attracted extensive national attention.
In 1966, Robert F. Kennedy, who was a subcommittee participant of the U.S. Senate Committee on Labor and Public Welfare, openly voiced his support in favour of Chavez’ grape strike. The same year, Chavez led the UFW to Austin in support of farm workers’ rights. His protests and movements stimulated the establishment of two popular unions - Oberos Unidos and Farm Labor Organizing Committee.
In 1968, he fasted for a total of 25 days to promote the principle of non-violence, inspired by Gandhian principles and the Catholic tradition of ‘penance’.
Through the 70s, Chavez and his unions organized a number of boycotts and strikes including the ‘Salad Bowl strike’, which went on to become the largest farm worker strike in U.S. history. In 1973, the UFW also set up a ‘wet line’ along the boundary of Mexico and the United States in order to prevent Mexican settlers from illegitimately entering the United States.
In the 1980s, he led a boycott to protest the use of toxic pesticides on grapes. He also went on a hunger strike or as he called it, ‘spiritual fasts’, to garner more public attention.
During this time, he also became one of the key figures in getting the exoneration provisions into the 1986 federal immigration act. In 1988, he fasted for 36 days to protest pesticide use. 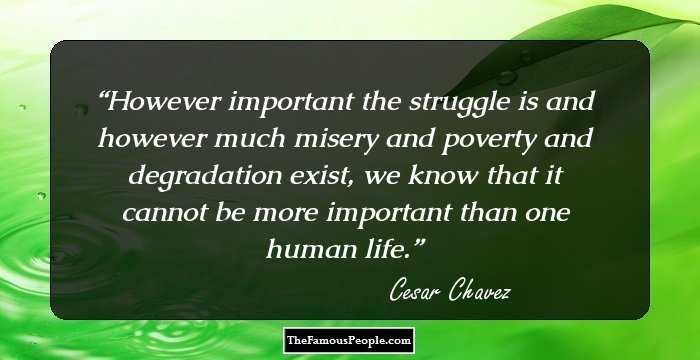 Quotes: Life
Continue Reading Below
Major Works
He co-founded the ‘National Farm Workers Association’ along with Dolores Huerta, to augment the working conditions of farm workers. People from all backgrounds including Americans, Mexicans, Filipinos and African-Americans joined his organization to support his cause. This later came to be known as the ‘United Farm Workers’ union. Together, they initiated the Delano grape strike and more such boycotts, which eventually led to the founding of two other independent unions - Oberos Unidos and Farm Labor Organizing Committee.
Awards & Achievements
In 1973, he was awarded the Jefferson Award for ‘Greatest Public Service Benefiting the Disadvantaged’.
In 1992, he was the presented the ‘Pacem in Terris Award’.
He was posthumously awarded the ‘Presidential Medal of Freedom’ by Bill Clinton, in 1994. 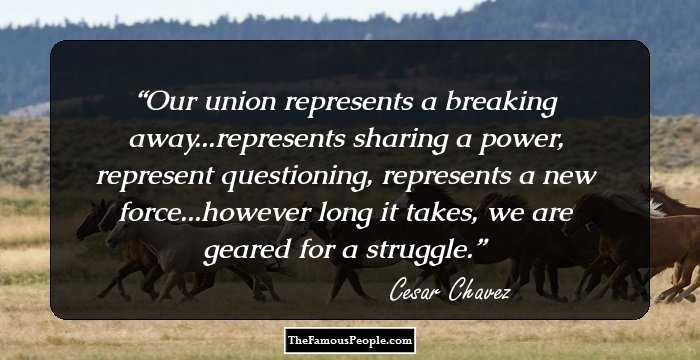 Quotes: Power
Personal Life & Legacy
He married Helen Fabela and the couple bore eight children.
He passed away of unspecified causes in San Luis, Arizona and was interred at the National Chavez Center in Kern County, California.
There have been countless books on his life, one of the most famous being, ‘Colegio Cesar Chavez, 1973-1983: A Chicano Struggle for Educational Self-Determination’.
There are a number of parks in San Jose, Berkeley, Sacramento and Long Beach that are named after him.
In 2004, the National Chavez Center was opened on the UFW national headquarters campus. There are also a number of elementary schools named in his honor.
The University of Arizona campus honored him with a building called, ‘Cesar E. Chavez Building’.
Cesar Chavez’s birthday is celebrated in Texas, California and Colorado as a state holiday in order to honor his noble work.
Trivia
This famous labor organizer and union leader is directly related to the famous professional golfer, Sam Chavez.

Quotes By Cesar Chavez | Quote Of The Day | Top 100 Quotes

See the events in life of Cesar Chavez in Chronological Order