Advanced Search
Claudius (Tiberius Claudius Caesar Augustus Germanicus) was the Roman emperor from 41 AD to 54 AD. As the emperor, he is credited to have expanded the Roman Empire to include Britain as a province. He was born as the son of Nero Claudius Drusus, a popular and successful Roman general who died when Claudius was just a baby. Raised by his mother who never remarried, he grew up to be a clumsy and unattractive young man who also suffered from a limp and slight deafness. He was ostracized by his own family because of these factors and was excluded from public office. However, his infirmity proved to be a blessing in disguise as the enemies of the noble family did not view him as a serious threat and he escaped the fate of several other nobles who had been assassinated by their rivals. His ascent to the throne happened by chance. Tiberius, the second emperor of Rome, was his uncle, and when Tiberius's successor Caligula was assassinated in January 41 AD, Claudius was declared the emperor. In spite of ascending the throne late in life, and despite not being experienced on the political fronts, he proved to be an efficient administrator. He began the conquest of Britain, and his empire underwent a vast expansion under his rule. He was also an intellectual and a noted historian who had a keen interest in books and academic study. Augustus
1st August In History
DID WE MISS SOMEONE?
CLICK HERE AND TELL US
WE'LL MAKE SURE
THEY'RE HERE A.S.A.P
Quick Facts

Ancient Roman People
Ancient Roman Emperors & Kings
Ancient Roman Historical Personalities
Leo Male
Childhood & Early Life
He was born on 1 August 11 BC at the Sanctuary of the Three Gauls as the son of Nero Claudius Drusus—a popular and successful Roman general—and Antonia. He had two older siblings.
He was the nephew of the emperor Tiberius and a grandson of Livia Drusilla.
His father died while Claudius was very young and he was raised by his mother. He was a sickly child who developed a limp and slight deafness following an illness. He was also clumsy and unattractive. Due to these reasons, his own family ostracized him and considered him to be an embarrassment.
As he reached his adolescence it became evident that he was an intelligent young man with interests in scholarly pursuits. Tutors including Livy and Sulpicius Flavus were hired to teach him history. He was also inclined towards philosophy. 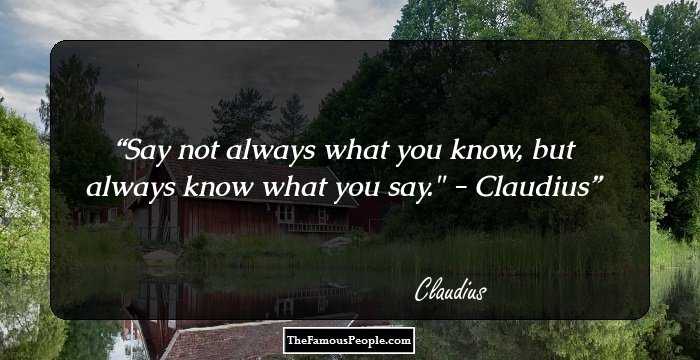 Quotes: You
Continue Reading Below
Ascension & Reign
Because of Claudius’ handicaps, he was never assigned any important position in the Roman Republic. He repeatedly requested his uncle, Tiberius, for a political position but his requests were turned down. He was only granted consular ornaments.
After the death of Tiberius, Caligula took over as the emperor. The new emperor recognized some of Claudius’ potentials and appointed him as his co-consul in 37 AD. But the emperor constantly tormented and humiliated Claudius before the Senate.
Caligula was assassinated in a broad-based conspiracy involving the Praetorian commander Cassius Chaerea and several senators on 24 January 41 AD. Following the murder, several other uninvolved noblemen were also killed. Terrified, Claudius fled to the palace to hide.
The Praetorian guards eventually found him, but instead of killing him, they installed him as the new emperor.
Though initially believed to be weak and incompetent, Claudius proved to be an able and efficient administrator. Upon becoming the emperor his health also improved considerably.
Under his reign, the Roman Empire underwent vast expansion. He launched the conquest of Britain in 43 AD, considered to be one of the most ambitious military campaigns of the 1st century. He dispatched a force of 40,000 troops and several war elephants across the English Channel and his troops soon established a stronghold in the territory.
Claudius visited Britain during the invasion bringing with him reinforcements and elephants and spent 16 days before returning.
After the conquest of Britain, the Roman colonia of Colonia Claudia Victricensis was established as the provincial capital of the newly established province of Britannia at Camulodunum. In addition to Britain, he also added Mauretania (North Africa), Thrace (the Balkans) and Lycia (part of Turkey) to the Roman Empire.
As a ruler he gave much importance to public works and infrastructural facilities. He built two aqueducts, the Aqua Claudia, begun by Caligula, and the Anio Novus. He also built several roads and canals throughout Italy.
Continue Reading Below
He improved the judicial system greatly and personally judged many of the legal cases tried during his reign. He also issued several edicts throughout his reign. These were on a number of topics and one especially famous one concerned the status of sick slaves who were often abandoned by their masters to die or killed. The edict stated that masters who chose to kill slaves rather than take care of them were liable to be charged with murder.
Claudius was also interested in scholarly pursuits and was a prolific writer. His major literary works include an Etruscan history, eight volumes on Carthaginian history, an Etruscan dictionary and a book on dice playing. 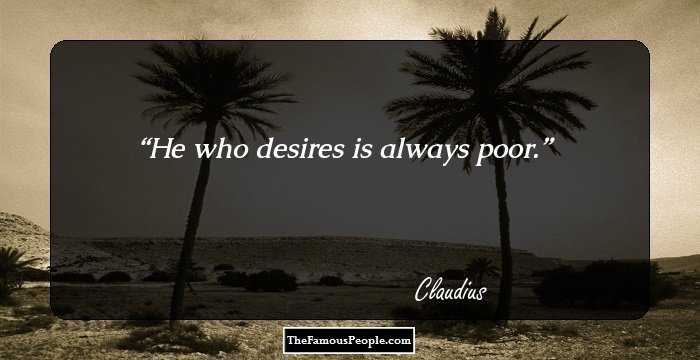 Major Work
As the emperor Claudius gained much fame and respect for vastly expanding the Roman Empire. In 43 AD, he undertook a military campaign for the conquest of Britain; the campaign was successful and Britain became a province of the Roman Empire.
Awards & Achievements
Claudius was widely worshipped as a living Princeps and was worshipped in Britannia in his own temple in Camulodunum.
Upon his death, he was deified by his successor Nero and the Senate almost immediately.
Personal Life & Legacy
Several ancient authors have accused Claudius of being a womanizer and being easily manipulated by women. He was married four times, and had been betrothed twice before.
His first wife was Plautia Urgulanilla with whom he had a son. Later on he divorced Urgulanilla for adultery, and soon took another wife, Aelia Paetina. This marriage too ended in divorce. He had one daughter from his second marriage.
Claudius married Valeria Messalina after some years. This marriage too ended because of his wife’s numerous sexual affairs. He had two children from this marriage.
His fourth and last marriage was to Agrippina the Younger.
He died in the early hours of 13 October 54 AD. It is generally believed that he was poisoned to death, and his final wife, Agrippina, is implicated to be the instigator.

See the events in life of Claudius in Chronological Order