Gaius Julius Caesar Augustus Germanicus, who was nicknamed ‘Caligula,’ was the third emperor of ‘Roman Empire.’ The unfortunate death of his father Germanicus and later the death of Tiberius in 37 AD led Caligula to the throne as the emperor of Rome. The first six months of Caligula’s reign were absolutely blissful as he brought forth several reforms and policies that were meant for the benefit of his citizens. However, following his ill health, he became a tyrannical leader. During the latter half of his reign, Caligula faced the consequences of his insane orders and engagements. He killed according to his whims and fancies, squandered state treasury, engaged in sexual activities with wives of other men, called himself God, directed much of his attention to ambitious construction projects, and became increasingly self-absorbed. His fear of dethronement was so high that he killed members of his family, including his sisters, brother, and son. However, not everything was negative during his reign. Caligula supervised abolishment of certain taxes, helped better Roman infrastructure and public transportation, and aided those harmed by natural calamities or mean rules Ancient Roman People
Emperors & Kings
Ancient Roman Men
Virgo Leaders
Male Leaders
Childhood & Early Life
Caligula was born Gaius Julius Caesar Augustus Germanicus on August 31, 12 AD, in Antium, Italia, to Germanicus and Agrippina the Elder. He was the third of the six surviving children of the couple.
Young Gaius accompanied his father on campaigns in north of Germania. Dressed in proper soldier attire with boots and armor, he earned the nickname Caligula— meaning little (soldier's) boot—that stayed with him till the end.
After the death of his father, Tiberius took over the throne. Caligula stayed with his mother, great grandmother, and later grandmother before being placed under the personal care of Tiberius.
In 33 AD, Caligula earned an honorary quaestorship, a position he retained until his rise as an emperor. Two years later, he was named joint heir to Tiberius's estate, sharing it with Tiberius’s grandson Gemellus. 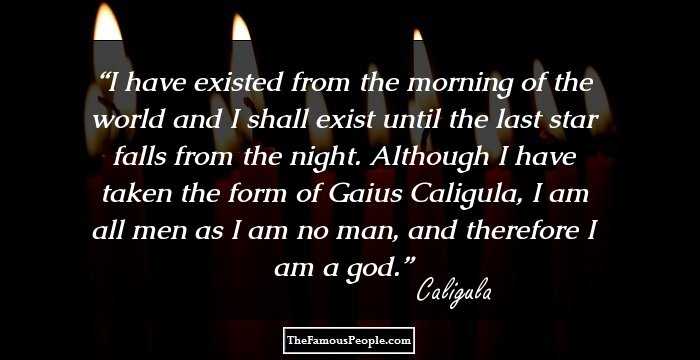 Continue Reading Below
Accession & Reign
Following Tiberius’ death in 37 AD, Caligula and Gemellus served as joint heirs. However, Caligula nullified Tiberius’ will, proving Gemellus insane, and thus took over as the emperor.
Caligula’s appointment as emperor and his return to Rome was marked with extreme joy, celebration, and ecstasy. The Romans welcomed ‘their own son’ with open arms.
His reign as an emperor commenced on a good note. He started off by granting bonus to military men and city troops. Subsequently, he recalled exiled people by nullifying Tiberius’ treason papers. He even banished certain sexual deviants and helped people affected by the imperial tax system.
Interestingly, Caligula’s illness in October 37 AD caused him to have a change of heart. From being a benevolent emperor, he soon turned into a ruthless leader. He started banishing people and even killed those whom he considered to be serious threat to his throne. He executed his close relatives, including his brothers and adopted son, and exiled others.
Following the death/exile of his close relatives, Caligula focused on political and public reforms. Unlike Tiberius, he publicized accounts of public funds. He abolished certain taxes and inducted new members into the senatorial order. The most significant of his reforms came when he introduced democratic elections.
Though Caligula was criticized for his executions, he was widely appreciated for his support, generosity, and bounteousness. His extravagance led to exhaustion of the state treasury. In order to restore state funds, he took desperate measures, including seizure of properties, re-interpretation of Tiberius’ will, levying taxes on lawsuit, prostitution, false fining, incorrect accusation, and forceful confiscation.
Within a year of his enthronement, he had squandered more than 2.7 billion sesterces that Tiberius had amassed all through. Resultantly, the financial crisis led to a brief famine. However, to tackle the same, he increased grain imports from Egypt.
Despite the financial crunch, Caligula did not compromise with his construction projects. During his reign, he oversaw the construction of various temples, theatres, racetracks, and so on. To improve public transportation, he built new roads and ordered the construction of channels that are considered to be engineering marvels even today. Furthermore, he repaired the city walls and the temples of the gods.
For his personal gains, Caligula expanded the palace. He supervised the construction of a temporary floating bridge to be built using ships as pontoons from the resort of Baiae to Port of Puteoli. He got two large ships constructed for himself. The two ships are considered amongst the largest vessels in the ancient world; one of them being nothing less than a floating palace.
Continue Reading Below
In 39 AD, a feud arose between Caligula and the Roman Senate that deteriorated their relations. Upon reviewing Tiberius’ treason trials, he concluded that many senators were not trustworthy. As such, he ordered a fresh set of investigations and trials. He replaced the consul and put several senators to death.
On the eastern front, Caligula, along with Herod Agrippa, suppressed several riots and conspiracies that rose from tension due to the spread of Greek culture, Roman law, and the rights of the Jews in the empire. Flaccus, who served as the prefect, ordered installation of statues of the emperor in Jewish synagogues. This move caused a major riot which led to Flaccus’ removal from the post and his subsequent execution.
In 40 AD, riots broke out between Jews and the Greeks; the Jews were accused of not honoring the emperor. Resultantly, Caligula ordered the erection of a statue of himself in the Jewish Temple of Jerusalem. The order was later revoked as it conflicted with Jewish monotheism.
In 40 AD, he expanded the Roman Empire into Mauretania. The annexation had both personal and political motive; to suppress the pressing military and economic needs and to curb down potential future threats. He also attempted the expansion of his empire into Britannia, but the annexation was only realized by his successor.
Some of the most outlandish claims by Caligula came when he introduced religion into his political role. He not just referred to himself as God but also dressed like one. He replaced the heads of various statues of gods with his own, and stated his wish to be worshipped as ‘Neos Helios’ or the ‘New Sun.’ He further ordered Roman senators to worship him as a tangible, living god.
In 40 AD, Caligula claimed that he would leave Rome and move to Alexandria, Egypt permanently. He made this announcement, hoping that he would be revered as a living God in Egypt. This announcement led to an outrage in Rome. 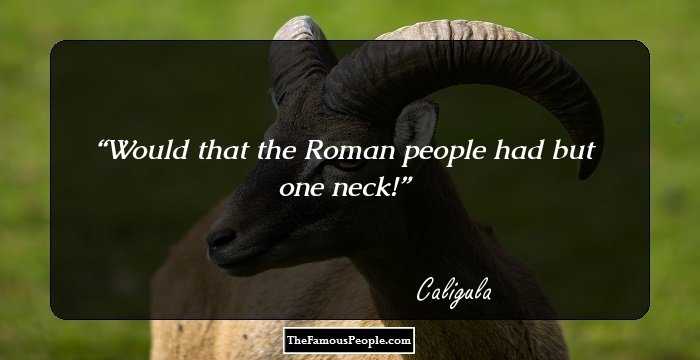 Major Works
Caligula, during his reign, supervised ambitious construction projects. He oversaw the construction of various temples, built new roads, and channels. He expanded the palace and ordered the construction of two large ships which went on to become the largest vessels of the ancient world.
Caligula supervised the abolishment of certain taxes, and aided those harmed by natural calamities. He restored the practice of democratic elections. He also expanded the Roman Empire by annexing Mauretania.
Continue Reading Below
Personal Life & Legacy
Caligula married Junia Claudilla in 33 AD. However, the marriage was a brief affair as Claudilla died the following year during childbirth. He then married Caesonia who gave birth to his daughter Julia Drusilla, who was later killed.
During his reign, he is said to have slept with wives of many men. He was also accused of forcefully prostituting his sisters. It is said that Caligula turned his palace into a brothel.
His tyrannical reign earned him many enemies who constantly plotted his death, but failed each time. The conspiracy to kill him, planned by officers within the Praetorian Guard and led by Cassius Chaerea, fructified in 41 AD.
On January 24, 41 AD, while addressing an acting troupe during a series of Games, Caligula was stabbed to death. He was stabbed by Cassius Chaerea 30 times, followed by a number of conspirators.
His death led to an outrage amongst Caligula's loyal Germanic guards. They attacked the assassins and conspirators, but the rampage cost the lives of some innocent senators and bystanders as well.
After Caligula’s death, the senate tried to restore republic, but Romans and the military men stayed loyal to the office of the emperor. Subsequently, Caligula’s uncle Claudius succeeded the throne.
Caligula’s body was placed under turf until it was cremated and entombed by his sisters. His mortal remains were later buried within the Mausoleum of Augustus. 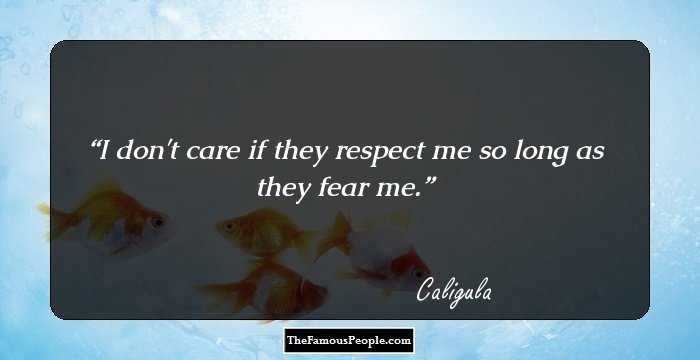 Trivia
While presiding over the Games, this Roman Emperor is said to have ordered his guards to throw an entire section of the crowd into the arena to be eaten by animals as he was bored during the intermission.

Quotes By Caligula | Quote Of The Day | Top 100 Quotes

See the events in life of Caligula in Chronological Order