Augustus, also called Octavian, adopted name Gaius Julius Caesar Octavianus, was the founder of the Roman Empire and its first Emperor. He first gained prominence after delivering the funeral speech for his grandmother Julia as a young boy and some years later, he was elected to the College of Pontiffs. While studying and undergoing his military training in Illyria, he heard of his maternal great-uncle Julius Caesar's assassination. Caesar had no legitimate heir under the Roman law and hence had named Octavian as his adopted son and heir, who gladly accepted the will and travelled to Italia to claim his inheritance. But he soon realized that the road to inheritance wasn't that simple as Mark Antony, Caesar's old ally and friend had taken hold of Caesar’s assets and the papers. After several political alignments, wars and treaties he finally received his due. During his reign, the Roman Empire attained Pax Romana (an era of relative peace), a new taxation system, road networks, courier system, the Praetorian Guard and official police and fire-fighting services. He led successful conquests of Egypt, Dalmatia, Pannonia, Norcium, and Hispania, and made all the neighboring states his client states. One of his biggest achievements was making peace with the Parthian Empire through diplomacy Maximinus Thrax
DID WE MISS SOMEONE?
CLICK HERE AND TELL US
WE'LL MAKE SURE
THEY'RE HERE A.S.A.P
Quick Facts

Ancient Roman People
Libra Men
Childhood & Early Life
He was born as Gaius Octavius on September 23, 63 B.C. in Velletri, Italy to Gaius Octavius, once governor of Macedonia, and Atia Balba Caesonia, niece of Julius Caesar.
His father passed away when he was four and his mother married Lucius Marcius Philippus, former governor of Syria. Philippus hardly paid any attention to Octavius, and soon he was sent to live with his grandmother, Julia Caesaris, who passed away in 52 or 51 BC.
After donning the toga virilis, he was elected to the College of Pontiffs in 47 BC and put in charge of the Greek games the following year.
He was supposed to accompany Caesar to Hispania in 46 BC but fell ill. After recovering, he immediately left for the war-front but was shipwrecked and washed ashore. He somehow managed to reach Caesar’s camp after travelling across hostile territories which impressed Caesar tremendously and he made Octavius the primary beneficiary in his will.
In 44 BC Caesar was assassinated by his friends and council-members, leaving Octavius as the political heir and heir to two-thirds of his estate. At this time, Octavius was in Illyria and sailed immediately to Italia. 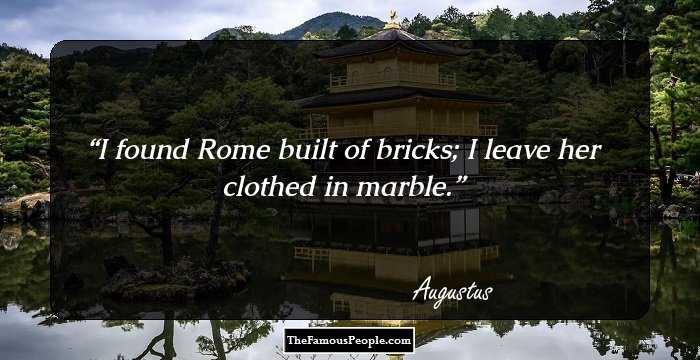 Quotes: I
Continue Reading Below
Ascension & Reign
Octavius’ enemy in his rise to power was Caesar’s chief lieutenant Mark Antony who had taken possession of his assets and refused to hand over Caesar’s funds to Octavius. Then to honor Caesar’s bequests to the Roman people, Octavius arranged for funds on his own from whatever resources he could.
Most of the senate was opposed to Antony and they believed the young Octavius, with his inheritance to the throne, could be manipulated as per their wishes. Octavius became a senate member before he turned 20.
When Decimus Brutus refused to give up Cisalpine Gaul, Antony besieged him at Mutina. The senate interfered to no avail as they possessed no army of their own. Octaviaus offered his help and soon relieved the siege.
After the victory, much of the due was given to Brutus rather than to Octavius, which irked him and he played no further part in the war. He marched into Rome and got a consulship whereas Antony made alliance with Marcus Aemilius Lepidus.
Eventually Octavius reached an agreement with Antony and Lepidus, and the three formed the Second Triumvirate naming 300 senators and 2,000 equites as outlaws. Historians believe this was done to eradicate their enemies.
After two battles at Philippi, the combined forces of the Triumvirate won over the forces of Brutus and Cassius and Antony took much of the credit for himself as the battles were easily won due to his legions.
After the victory, Antony gave Gaul, Hispania and Italia to Octavius, the Africa Province to Lepidus and himself moved to Egypt in an alliance with Queen Cleopatra VII.
Octavius wanted a divorce from his first wife, Clodia Pulchra and had her sent back home. Clodia’s mother Fulvia found this highly disrespectful and she allied with Lucius Antony in a war against Octavius. Fulvia was defeated and exiled to Sicyon.
In collaboration with Lepidus, Octavius launched a war against Sextus Pompeius in Sicily in 36 BC. Upon victory, Lepidus tried to claim the city for himself but his troops, tired of all the fighting, sided with Octavius and the money he offered. This act earned Lepidus an exit from the triumvirate.
Continue Reading Below
Mark Antony who had married Octavius’ sister in 42 BC sent her back in 32 BC in order to ally with Cleopatra. Augustus viewed this as a sign of desertion and the senate revoked Antony’s consul power. After several unsuccessful wars, Antony and Cleopatra committed suicide in 30 BC.
In 27 BC, Octavius was awarded the name "Augustus" by the senate. This new title, derived from the Latin word Augere (meaning to increase), can be translated as "the illustrious one".
Augustus’ army found no resistance while capturing Galatia (now Turkey) in 25 BC and then they took over Cantabria after a few years of war in 19 BC. Cantabria proved to be an important invasion as the place housed vast mineral deposits, which would be used for future explorations and invasions.
He led a further successful conquest of the people of the Alps in 16 BC, a major geographical strong-hold which provided security to the Roman citizens of Italy from the enemies in Germania. His adopted son, Tiberius, won against the Pannonian tribes of Illyricum and his brother, Nero Claudius defeated the Germanic tribes in Rhineland.
The Parthian Empire always posed a threat to Rome's eastern territories and Augustus believed his client states would provide the necessary reinforcements in times of need. Diplomatically, he got the battle standards of Crassus back to Rome, which was accepted as Parthia’s submission to Rome. 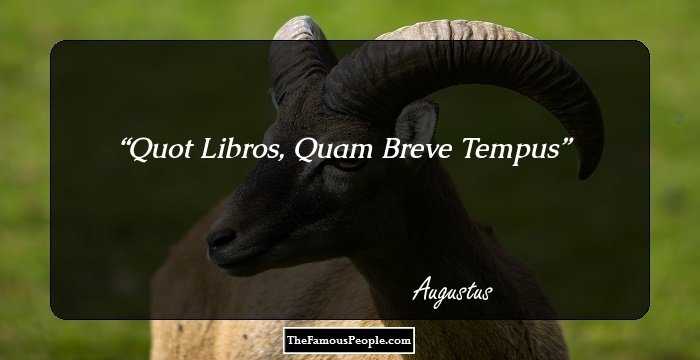 Major Works
Augustus is known as the founder of the Roman Empire and his greatest diplomatic achievement was the retrieval of the battle standards of Roman general Crassus after the Battle of Carrhae from the King Phraates IV of Parthia through diplomatic relations. This symbolized Parthia’s submission to Rome.
Personal Life & Legacy
Augustus married three times in his life and the names of his wives were Clodia Pulchra, Scribonia and Livia Drusilla. His only biological child was a girl named Julia through his second marriage.
He passed away on 19 August 14 AD in Nola after a long illness. The body was brought back to Rome amidst a huge funeral procession and was cremated close to the Mausoleum of Augustus. 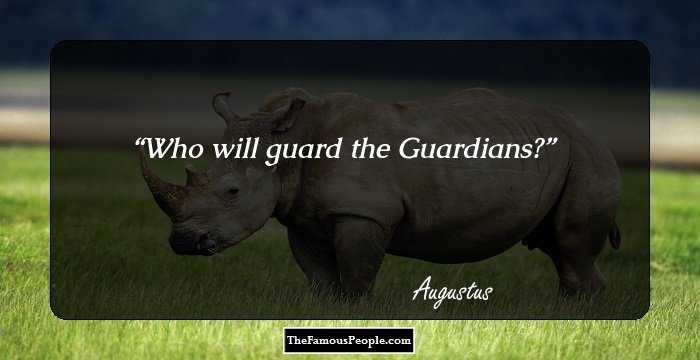 See the events in life of Augustus in Chronological Order