Claudia Winkleman is an English television presenter, radio personality, film critic and journalist who is most known for co-hosting Strictly Come Dancing along with Tess Daly since 2014. She initially presented the companion show Strictly Come Dancing: It Takes Two and then moved to present the Sunday night result show before taking up the hosting duties of the main show. Apart from Strictly Come Dancing, she has hosted a variety of BBC television shows including The Great British Sewing Bee, The Film Show and The Eurovision Song Contest. Additionally, she has been associated with BBC Radio 2 too and has presented Claudia Winkleman's Arts Show and Claudia on Sunday. In 2020, for the same channel, she picked up the hosting duties of Saturday morning show after Graham Norton’s exit. Her career as a journalist began as a travel writer, after which she penned articles on wider lifestyle topics. The publications she has written for include Sunday Times, The Independent, Cosmopolitan and Tatler. Recently, she published her first book Quite: Love, Life And Eyeliner and began co-hosting her podcast – How Did We Get Here? – on parenting and family issues. 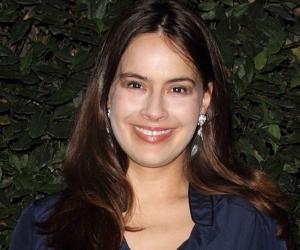 Claudia Anne Irena Winkleman was born on 15th January 1972 in London in a Jewish family to Eve Pollard and Barry Winkleman. Her father was a book publisher (published Times Atlas of the world) and her mother was the former editor of the Sunday Express.

Her parents separated while she was still very young, and went on to remarry – her father to the children's author Cindy Black and mother to former editor of the Daily Express, Nicholas Lloyd.

She has a younger half-brother named, Oliver, and a half-sister named Sophie Winkleman (actress).

She grew up in Hampstead and for her education went to the independent City of London School for Girls. Later, she joined the prestigious Murray Edwards College, Cambridge from where she completed her MA Hons in History of Art.

Claudia Winkleman began her journalism career as a travel writer in 1991 and wrote for numerous publications like The Sunday Times, The Independent and Metro. Later, as her television career developed, she shifted more towards lifestyle writing and published her articles with Cosmopolitan and Tatler.

The following year, she made an entry into BBC’s long running travel series Holiday and continued to make an appearance in the show quite frequently throughout the mid-1990s.

The 1990s also saw her working as a reporter on This Morning as well as hosting television shows like God's Gift,�Pyjama Party,Talking Telephone Numbers, Fanorama and Tricky.

From 2002 to 2004, she became the host of BBC Three’s�Liquid News, a show presenting daily updates from entertainment industry.

In between in 2003, she joined BBC Three’s talent reality show Fame Academy and presented updates from it. She reprised her role in its spinoff celebrity version Comic Relief Does Fame Academy in 2005 and picked up the lead presenting role in the 2007 series

From 2005 to 2008, her writing career too continued as she wrote a weekly column – Take It From Me – for The Independent.

In 2005, she began hosting BBC Three reality TV Series documentary The House of Tiny Tearaways and presented four series of it till 2007.

Yet again in 2007, she hosted the Sky Movie Premiere's live coverage of both Academy Awards (in 2008 too) and Golden Globe Awards.

In 2008, she co-hosted Eurovision: Your Decision (selection process show to finalise UK’s entry into Eurovision Song Contest) together with Terry Wogan and the final leg of Sport Relief 2008 together with Patrick Kielty.

From 2008 to 2013, she hosted Claudia Winkleman's Arts Show for BBC Radio 2 wherein she conducted interviews with personalities from art world and also presented reviews and debates.

In 2009, she was assigned to host the fourth season of ITV1’s cookery reality show Hell's Kitchen.

The following year, she was hired as the co-presenter of BBC’s flagship cinema review television programme The Film Show (the show’s title is modified annually to include the broadcast year). She continued with the show till 2016.

Between 2013 and 2016, she took up the hosting duties of BBC Two’s reality sewing competition show, The Great British Sewing Bee, wherein talented amateur sewers competed with each other for the title of Britain's best home sewer.

In 2014, together with hosting the Sunday night results show, she began co-hosting the main Strictly Come Dancing show with Tess Daly. She currently continues to host the show.

In 2016, she started hosting BBC Radio 2 Sunday night show, Claudia on Sunday, and continued with till March 2020 when the show concluded.

In 2016 again, she became the new weekly style columnist for The Sunday Times.

In 2018, she co-presented BBC Radio 2 show The Biggest Weekend. Over the years, she also served as the stand-in presenter for various BBC Radio 2 shows in the absence of main presenter. These include Dermot O'Leary, Ken Bruce and Steve Wright in the Afternoon.

In 2020, she wrote and released her first book Quite: Love, Life And Eyeliner which became a Sunday Times best seller.Beginning January 2020, she co-hosts a podcast called How Did We Get Here?, together with clinical psychologist, Tanya Byron. This podcast by Somethin’ Else deals with family and parenting issues.

In November 2020, she was roped in to present Saturday Morning show on BBC Radio 2 in place of Graham Norton.

Claudia Winkleman is a huge supporter of British charity Comic Relief and has worked as its co-presenter from 2009 to 2015. She has also co-presented its biennial charity event Sport Relief from 2010 to 2018.

She has presented numerous award functions over the years including the British Fashion Awards, the Purple Apple Awards, Drapers Etail Awards, the HSBC Awards, GQ Food & Drink Awards and the Glamour: Women of the Year Award.

She is also the face of shampoo brand, Head & Shoulders, and has launched her own make up range for Marks and Spencer including a soft black kohl eyeliner.

In 2015, for her work in Strictly Come Dancing, she picked up the Glamour Award for Presenter of The Year (with Tess Daly) and Royal Television Award for Best Entertainment Presenter.

See the events in life of Claudia Winkleman in Chronological Order