Charles Lamb was an English essayist, poet, fiction writer and critic from the Romantic period who continues to be one of the most lovable and read English essayists of all times. He was one of the significant members of the Lake Poets among whom William Wordsworth and Samuel Taylor Coleridge were his close friends. Although he could not attain enduring popularity for his poetry as his friends Wordsworth and Coleridge did, he later channelized his energies into writing prose and in this pursuit emerged as one of the best essayists of his times. Two of his collections, ‘Essays of Elia’ and ‘Tales from Shakespeare’ are considered his best works as an essayist. ‘Essays of Elia’, which contained a string of autobiographical record of experiences and essays of Elia, a fictitious character of the writer, is counted among the most excellent illustrations of the English style of essays and compositions. His other prominent work ‘Tales from Shakespeare’, which he produced along with his sister Mary Lamb, consists of plays of Shakespeare for children. Some of his other notable works are ‘John Woodvil’, ‘The Adventures of Ulysses’, ‘On the Tragedies of Shakespeare’ and ‘Witches and Other Night Fears’. P B Shelley
Poets #154
Essayists #23
Writers #443
DID WE MISS SOMEONE?
CLICK HERE AND TELL US
WE'LL MAKE SURE
THEY'RE HERE A.S.A.P
Quick Facts

British People
Essayists
British Men
Male Poets
Male Writers
Childhood & Early Life
He was born on February 10, 1775, in London to John Lamb and Elizabeth Field as their youngest child among three living children. His father worked as a clerk for a lawyer. His brother John and sister Mary were many years older to him. He was quite close to his paternal aunt Hetty and maternal grandmother Mrs. Field.
Mary taught him to read and thereafter he came under the guidance of Mrs. Reynolds with whom he maintained lifelong contact.
He joined ‘Christ’s Hospital’ at seven. It was in this free boarding school where he met Samuel Taylor Coleridge and developed a friendship that remained for life. He attended the school till 1789. 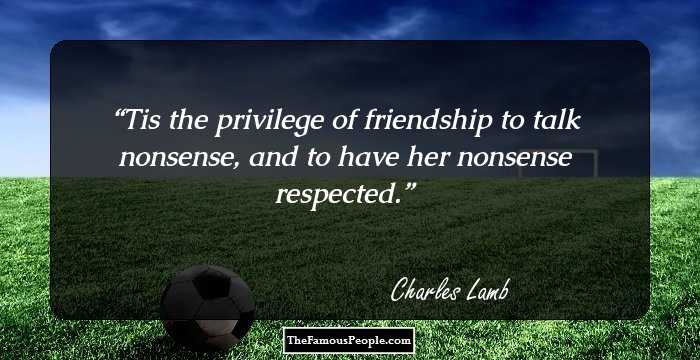 Famous Beautiful Women With Green Eyes
Career
He suffered from stutter problem all his life, which disqualified him from a clerical career. After a short stint in the office of a London merchant Joseph Paice, he joined the Examiner's Office of the South Sea House where he served in a small post till February 8, 1792.
On April 5, 1792, he joined the ‘East India House’ which was the headquarters of ‘East India Company’, as a clerk in its Account’s Office. He served the company for over three decades till his retirement in 1825.
Charles became heavily addicted to alcohol. Once in 1795, he had to stay in an asylum for six weeks.
On September 22, 1796, his elder sister Mary in a fit of rage stabbed and killed their mother Elizabeth. A subsequent investigation revealed Mary to be suffering from temporary mental illness. Mary’s custody was given to Charles Lamb.
Lamb and his sister led an active social life with some of the notable literary and theatrical personalities around. Coleridge was a close childhood friend and later Lamb befriended William Wordsworth, both of them remained his friends for life.
He became acquainted with many young writers in London like Leigh Hunt, William Hazlitt, and Percy Bysshe Shelley who advocated political reform.
On April 16, 1796, his first literary work came out in the first volume of ‘Poems on Various Subjects’ published by Coleridge that contained four poems of Lamb.
In 1798 his romantic prose ‘A Tale of Rosamund’ was published. In the same year his works were published along with that of Charles Lloyd in the book ‘Black Verse’.
After his father’s demise in 1799, Mary shifted with Charles for good. However her insanity proved to be recurrent in nature and she had to visit the asylum many a times.
Continue Reading Below
To earn a decent living for him and his sister Mary, he started writing short articles for London newspapers from around 1801.
His next publication was the poetic tragedy ‘John Woodvil’ in 1802, which failed to gain success.
‘Mr. H’, his two-act farce was booed at the ‘Drury Lane Theatre’ when it was performed in 1807.
One of his notable works ‘Tales from Shakespeare’, which he produced along with his sister Mary Lamb, was published in 1807. It is an adaptation of plays of Shakespeare for children where he worked on the tragedies while Mary worked on the comedies.
He retold the works of Shakespeare while sprinkling his own critical views regarding the plays. Many of his critical reviews on Shakespeare as also on William Hogarth were published on ‘Reflector’, a quarterly magazine by Hunt.
In 1808 Charles Lamb came out with ‘The Adventures of Ulysses’, an adaptation of ‘Odyssey’ for children. The same year his ‘Specimens of English Dramatic Poets Who Lived About the Time of Shakespeare’ that consisted of selective scenes of Elizabethan dramas was published.
Thereafter Charles and Mary published ‘Mrs. Leicester’s School’ in 1809.
A collection of essays, ‘Essays of Elia’, which contain autobiographical account of experiences of Elia, an imaginary figure created by Lamb, was published in 1823. The essays were earlier issued serially in the ‘London Magazine’, the oldest literary journal of UK.
However Robert Southey made a critical review of ‘Essays of Elia’ in the January 1823 issue of the ‘Quarterly review’ and also painted Lamb as irreligious. Lamb retaliated by writing a letter to Southey and published it on October 1823 in the ‘London Magazine’, expressing that his being a dissenter of the Church does not mean that he is an irreligious man.
Continue Reading Below
‘The Young Catechist’, ‘On The Lord's Prayer’, ‘Composed at Midnight’ and ‘A Vision Of Repentance’ are some of his several poems that reflect his faith while he expressed his dissent for atheism in ‘Living Without God In The World’.
Some of his other notable works are ‘On the Tragedies of Shakespeare’ (1811), ‘Witches and Other Night Fears’ (1821), ‘The Pawnbroker's Daughter’ (1825) and ‘The Last Essays of Elia’ (1833). 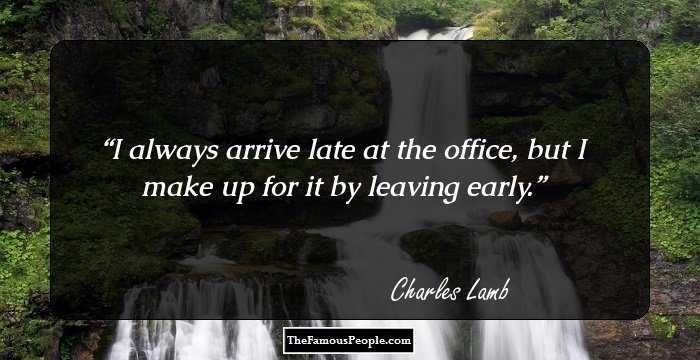 Quotes: I
Major Works
Lamb’s work along with his sister Mary, ‘Tales from Shakespeare’, emerged as a bestseller in the ‘Children’s Library’ of William Godwin.
His collection of essays in ‘Essays of Elia’ is considered one of the most remarkable works on English style of essays and compositions.
Personal Life & Legacy
His first supposed love interest was Ann Simmons, in 1792, who finds place in many of his Elia essays with the pseudonym ‘Alice M’. His love affair failed and Simmons married a silversmith.
He again fell in love with actress Fanny Kelly, but was unsuccessful this time as well when Kelly turned down his marriage proposal.
In 1823 he and his sister adopted Emma Isola, an orphan girl.
As his sister’s insanity bouts became more frequent, he relocated to Edmonton in 1833 so that Mary can avail constant care from her nurse. The Same year Emma married Edward Moxon, a friend of Lamb and Lamb became more lonely and depressed.
On December 27, 1834, he died after suffering from erysipelas following a fall in the street. He was interred in Edmonton at the ‘All Saints' Churchyard’. Mary was laid beside him after her death in 1847. 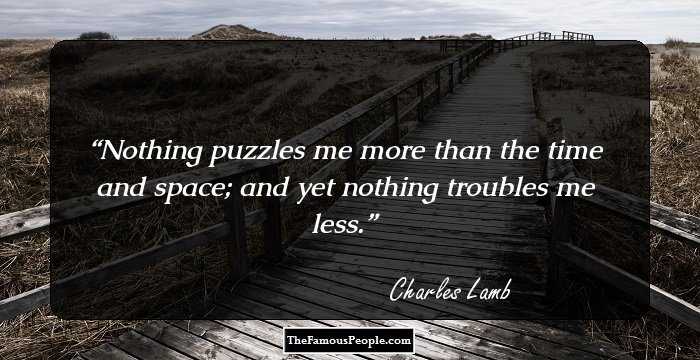 Quotes: Me, Time
Trivia
One of the six houses of ‘The Latymer School’ in Edmonton is named after him.
William Wordsworth paid tribute to his friend with his epitaph poem ‘Written After The Death Of Charles Lamb’ (1835; 1836).
You May Like

Quotes By Charles Lamb | Quote Of The Day | Top 100 Quotes

See the events in life of Charles Lamb in Chronological Order