Carol Burnett is a famous American comedian and actress. Best known for starring in the long-running television variety show ‘The Carol Burnett Show’, she is truly a leader in the world of television entertainment. Hers’ is a perfect rag to riches story—from a period of distress in the early years to the all-gloss and glitter, later in her life. Undeterred by the sorrow, she in fact used the same for a life full of laughter, smile, comedy and entertainment. Burnett’s entry into the world of entertainment was as a guest actor but soon, she affirmed her position and set sail for a glorious career. Over the years, she developed sloppy slapstick comedy style that has been highly lauded by the audience. While she did a number of shows, theatre and films, the best bit came with her eleven years and 286 episodes running show, ‘The Carol Burnett Show’. The show not just allowed her to exhibit her multi-talented side but gave audiences a taste of an upgraded television variety show that included comedy sketches in the form of parodies, musical numbers, weekly guest stars and question-answer segment. In her five decades of career as a comedian and stage actor, she has literally ruled the domain and has been presented with numerous awards and honors American People
Comedians
American Women
Texas Actresses
University Of California, Los Angeles
Childhood & Early Life
Carol Creighton Burnett was born to Joseph Thomas Burnett and Ina Louise on April 26, 1933 in San Antonio, Texas. Her father was a movie theatre manager and her mother worked as a publicity writer.
Burnett had a traumatic childhood. Both her parents suffered from alcoholism. After their legal separation, she was raised by her maternal grandmother, who instilled in young Burnett the love for movies.
She graduated from Hollywood High School in 1951. Subsequently, she enrolled at the University of California, Los Angeles for a course in journalism. However, following the freshman year, she switched her majors to theatre arts and English.
Burnett longed to enter a playwright program but it required her to attend an acting workshop. Reluctantly she joined, but was so smitten that she decided to make acting her profession.
She performed for several university productions and theatre groups. With each performance, she discovered her natural comic timing and musical abilities. Though her mother did not approve of her acting career, she continued with her new-found passion.
It was her performance at a professor’s private party during her senior year that sealed her fate of a glorious future. A patron was so much so impressed by her performance that he aided her with a $1000 interest-free loan that allowed her to pursue her dream to going to New York and entering showbiz. 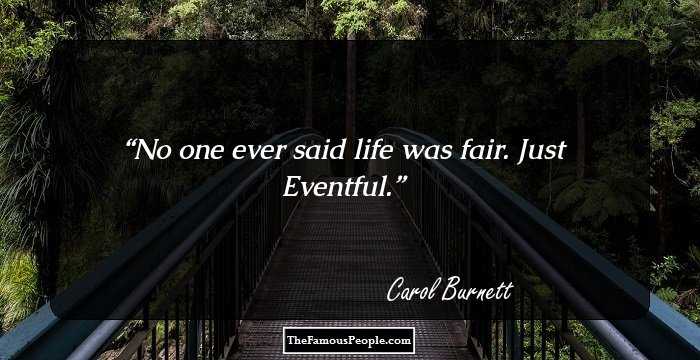 Quotes: Life
Continue Reading Below
Career
In 1954, she left for New York City. After a couple of stints at local show, she eventually gained her big break in 1955 in the popular kids’ television series, ‘The Paul Winchell and Jerry Mahoney Show’ as a girlfriend to ventriloquist’s dummy.
In 1956, she bagged the role of Buddy Hackett’s gawky girlfriend in the short-lived NBC sitcom, ‘Stanley’. Its premature conclusion led Burnett to perform in the New York cabarets and night clubs. It was during this time that her outstanding performance in the novelty song, ‘I Made A Fool of Myself’ had spectators rolling with laughter.
In 1957, she made night-time variety show appearances on Jack Paar’s ‘The Tonight Show’ and ‘The Ed Sullivan Show’. Same year, she appeared in television’s earliest game show, ‘Pantomine Quiz’.
While Burnett earned a huge fan club with her performance in television, it was her Broadway debut that set the stage for stardom. She appeared as Princess Winnifred in the 1959 Broadway musical comedy ‘Once Upon a Mattress’ which earned her, her first Tony Award nomination.
In 1959, she became a regular player in the popular variety series, ‘The Garry Moore Show’ which lasted until 1962. For the show, she played a repertoire of characters, the most favourable being her act of a put-up cleaning woman that eventually became her alter-ego. Same year, she earned her first Emmy award in the category of Outstanding Performance in a Variety or Musical Program or Series.
The phenomenal success of the Moore Show made Burnett a household name. Taking her success story forward, she co-starred with Julie Andrews in ‘Julie and Carol at Carnegia Hall’, which won her, her second Emmy. During this time, she guest appeared in several shows.
In 1963, she made her official film debut with the movie, ‘Who’s Been Sleeping in My Bed?’ A lightweight comedy, she starred opposite Elizabeth Montgomery and Dean Martin.
In 1964, she performed in the Broadway musical, ‘Fade Out-Fade In’ but her appearance was short-lived due to a neck injury. She returned temporarily but only to leave the show for the variety program, ‘The Entertainers’ which in turn lasted for one season only.
Her friendship with Jim Nabors earned her a recurring role in the latter’s successful series, ‘Gomer Pyle, U.S.M.C’, first as a tough corporal and later as a gunnery sergeant.
Continue Reading Below
In 1966, she befriended Lucille Ball who soon became her mentor. She appeared in several episodes of the former’s signature show, ‘The Lucy Show’. In the show, her character journeyed from being a shy and inhibited person to a fashion bombshell.
The successful career of Burnett reached its peak in September, 1967 when her flagship show, ‘The Carol Burnett Show’, premiered on CBS. The show included a talented club of comedic actors and featured comedy sketches, musical numbers, weekly guest stars and question-answer section. They parodied films, television and commercials.
In its very first season, ‘The Carol Burnett Show’ became a huge success and garnered loyal viewership that lasted through all the seasons. During the eleven years that the show lasted, it bagged 23 Emmy Awards and several Golden Globe nominations.
Sensing that the show had run its course, Burnett decided to end the same on a high note. The farewell episode was aired on March 17, 1978 and lasted for two hours during which it included a recap of classic footage of the show’s run, guest appearances and favourite gimmicks that the long-standing characters played.
In the summer of 1979, four post-script episodes of the show were aired on ABC under the name, ‘Carol Burnett and the Company’
Immediately following the end of her show, she ventured into the world of cinema. She stepped out of the comfort zone of comedy and tried her hand at drama with the television film, ‘Friendly Fire’. Her other films released during this time include ‘Life of the Party: The Story of Beatrice’, ‘The Four Seasons’, ‘Annie’, ‘Noises Off’
In the 1990s, she made a television comeback with the couple of variety shows including, ‘Carol & Company’, ‘Magnum, PI’, ‘Touched by an Angel’, ‘Mad About You’ (for which she won an Emmy) and ‘Desperate Housewives’.
In 1995, she made her Broadway comeback with the show, ‘Moon Over Buffalo’. For the same, she received a Tony Award nomination. In 1999, she made an appearance in the Broadway revue, ‘Putting It Together’.
In 2002, along with her daughter Carrie, she co-wrote a play based on her best-selling memoir, ‘One More Time’ (1986). The play had renowned actors take up prominent roles. In 2010, she penned another memoir, ‘This Time Together’.
Continue Reading Below
From 2008 to 2012, she guest starred in a variety of shows, an animated series ‘Horton Hears a Who!’, drama ‘Law & Order: Special Victims Unit’, ‘Glee’ and voice role for ‘The Secret of Arrietty’.
Till date, Burnett appears on television, her most recent outing being for ‘Hot in Cleveland’ and ‘Hawaii Five O’ 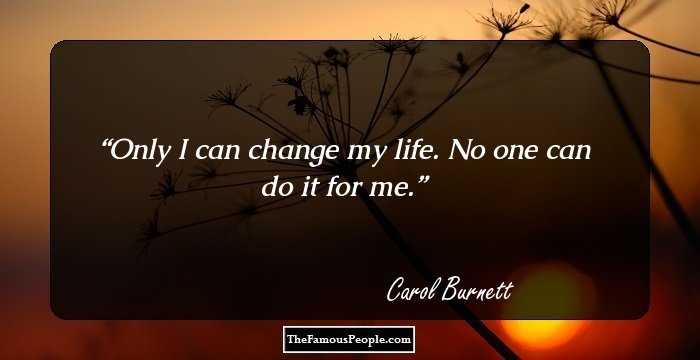 Quotes: Life, Me, Change, I
Major Works
Burnett’s talent and skill had earned her a lot of fan following for her television shows, but it was her Broadway debut that set the stage for her runaway success in films, television and theatre. Her performance in the 1959 Broadway musical, ‘Once Upon a Mattress’ earned her, her first award
The highpoint in her career came with her flagship show, ‘The Carol Burnett Show’. Ever since its launch, the show became a huge success and garnered loyal viewership that lasted through all the seasons. During the eleven years that the show lasted, it bagged 23 Emmy Awards and several Golden Globe nominations.
Other than acting in films, television and theatre, she has penned two memoirs: ‘One More Time’ (1986) and ‘This Time Together’ (2010).
Awards & Achievements
For her outstanding performance in films, television and theatre, she won Emmy Award six times, in various categories, apart from garnering several nominations.
She won Golden Globe Award five times for her flagship show, ‘The Carol Burnett Show’.
She was inducted in the Television Hall of Fame in 1985 and the California Hall of Fame in 2009
In 2003, she was the proud recipient of Kennedy Center Honors.
In 2005, she was presented with the prestigious Presidential Medal of Freedom
In 2013, she received the 2013 Mark Twain Prize for American Humor at the Kennedy Center. With this, she became the first woman to receive both Kennedy Center Honors and Mark Twain Prize 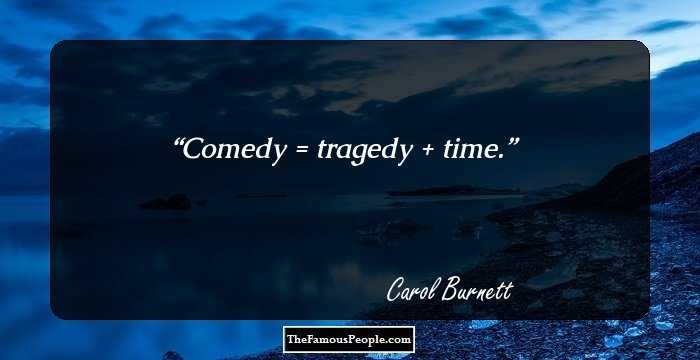 Quotes: Time
Personal Life & Legacy
In 1955, Burnett married her college sweetheart Don Saroyan but the couple divorced in 1962.
In 1965, she married TV producer, Joe Hamilton. The couple was blessed with three daughters, Carrie Hamilton, Jody Hamilton and Erin Hamilton. The two divorced in 1984.
In 2001, she married Brian Miller, who is 23 years her junior. He is the principal drummer in and contractor of the Hollywood Bowl Orchestra.

Quotes By Carol Burnett | Quote Of The Day | Top 100 Quotes

See the events in life of Carol Burnett in Chronological Order