Don’t go by the calm, reasonable voice, stuttering delivery, deadpan eyes and poker-faced look of Bob Newhart – he has the ability to tickle even the most hardest of your bones in a funny way! What differentiates him from his comedian counterparts is the fact that unlike others who employ tricks and punches, he gets his audience into a laughter riot just with a cantankerous voice and calm demeanour. Interestingly the stammer and the stutter which we have grown fond of is not an inherent Newhart trait but a self-made one! Comedy came naturally to this once accountant and advertising copywriter who shot to fame with his 1960s, released humorous monologue, ‘The Button-Down Mind of Bob Newhart’. The album not only became a bestseller, but chronicled to the No 1 position at the Billboard pop chart, spawning the release of its sequels and other albums. Other than this, he has also appeared in a number of television shows and films, the most notable venture being the ‘The Bob Newhart Show’ which expanded for six seasons including 142 episodes. Three times Grammy award winner, Newhart’s trademark one-sided conversation and telephone monologues have captured the heart of millions of his fans worldwide. In the following lines, we have provided in depth information about his life and childhood. Bob Newhart was born as George Robert Newhart to Julia Pauline and George David Newhart in Austin, Chicago, Illinois on September 5, 1929. His father co-owned a plumbing and heating supply enterprise.

He had an Irish, German and English ancestry. Trained as a Roman Catholic, he attended the St Catherine of Siena Grammar School and St Ignatius College Prep School. It was at high school that he changed his name to Bob
Completing high school studies in 1947, he enrolled himself at the Loyola University of Chicago for a degree in business management. He graduated from the same in 1952. 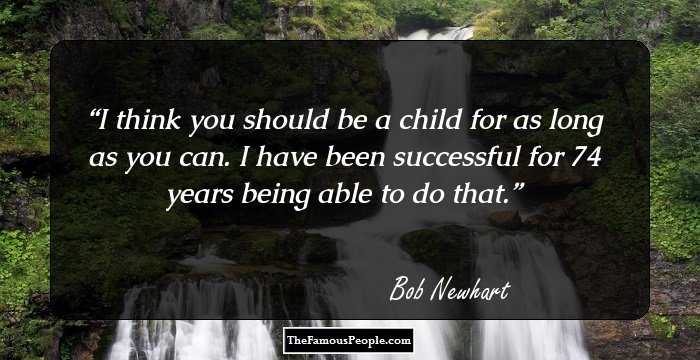 The Hottest Male Celebrities With The Best Abs
Career
For two years after graduation, he served in the US Army as a personnel manager in Korean War. Relieved from his duties in 1954, he took up job as an accountant and later in 1958, as an advertising copy editor. In his pastime, he wrote comedy sketches for radio.
It was during his years at the ad agency that he made long telephonic calls to Ed Gallagher, his co-worker, wherein they entertained each other. Later, they recorded these calls and started using them as tapes for audition for comedy work.

Though Gallagher lost interest in the same with time, he continued the recordings and developed a lingo which remained with him for the rest of his life. Coincidentally, his audition tape was heard by a disc jockey in 1959, who officially introduced him to Warner Bros Records talent head.

His impressive comic timing and knack for playing with words earned him a contract with the production house. He was basically entrusted with the job of expanding his recorded material into stand-up routine

No sooner, Bob Newhart became famous for his audio releases which portrayed him as the world’s first solo ‘straight man’. His main motive was to portray one end of a conversation.

In his act, he mostly used intentional stammer, smoothly clubbing the same with politeness and disbelief of what he was hearing. The interesting combination left the audience in splits of laughter every time they heard his gags.
Just a year later, he became so much so famous that he released his own debut album, ‘The Button-Down Mind of Bob Newhart’. Though it was too early for him to launch his own album, the risk paid off as audience were in awe with his unique storytelling style and ability to match comedian sensibility in absurd situations.

At the 1960’s Billboard chart, Button-Down became the first comedy album to reach No. 1 position, quickly surpassing Elvis Presley’s ‘The Sound of Music’. The album was well received both commercially and critically. It peaked at No 2 position at the UK Album Chart.

Following the super success and overwhelming response of his debut album, Bob Newhart, in a matter of days, released his second album, which was a follow up of Button-Down, titled, ‘The Button-Down Mind Strikes Back’. This album too met with an excellent response.

Continue Reading Below
In 1961, his career took a leap further as he launched himself on television, with NBC in his own stand-up show titled, ‘The Bob Newhart Show’. Though the show lasted for a single season, it nevertheless gained favourable response winning him an Emmy nomination.
He took his comedy album count resting at two further by coming up with yet another Button-Down follow-up, ‘Behind the Button-Down Mind of Bob Newhart’ in 1961. The following year, he released, ‘The Button-Down Mind on TV’.
Towards the end of the 1960s decade, he released three more albums including, ‘Bob Newhart Faces Bob Newhart’, ‘The Windmills Are Weakening’ and ‘This Is It’. Additionally, he appeared as guests in a number of television shows, ‘The Dean Martin Show’, ‘The Ed Sullivan Show’, and ‘The Judy Garland Show’.
In ‘The Alfred Hitchcock Hour’ show, he served in a guest role for a number of occasions. Besides this, he became one of the significant character actors on the show. His excellent performance led to roles in other series including ‘Bob Hope Presents the Chrysler Theatre’, ‘Captain Nice’, ‘Insight’, and ‘It's Garry Shandling's Show’.
In 1971, he came up with his next comedy album, ‘Best of Bob Newhart’. Two years later, he released the album, ‘Very Funny Bob Newhart’. His tryst with television continued as he appeared as himself on ‘The Simpsons’, and as a retired forensic pathologist on ‘NCIS’. Additionally, he appeared in ‘ER’ and ‘Desperate Housewives’.
His deadpan delivery and purposeful stammer won the hearts of the audience in the small screen leading him to bag comedy roles in popular films, starting with ‘Hell Is For Heroes’. Thereafter, he was seen in a couple of movies such as, ‘First Family’, ‘On a Clear Day You Can See Forever’, ‘In & Out’, ‘Cold Turkey’, ‘Catch 22’, ‘Elf’ and ‘Horrible Bosses’.
In 1972, his presence on the television screen which was by then restricted to guest roles and character actor magnified as he was offered work on a pilot series titled, ‘The Bob Newhart Show’. Unlike the former variety show, it was a sitcom.
Produced by MTM and aired on CBS, ‘The Bob Newhart Show’ ran for 6 seasons featuring 142 episodes. In the sitcom, he played the role of a dry psychologist, Bob Hartley. It faced tough competition from other shows but nevertheless, managed to gain enough TRP.

After the end of the ‘The Bob Newhart Show’, he took a hiatus from television. His sabbatical ended four years later in 1982, when he was featured in a new sitcom on CBS titled, ‘Newhart’. In it, he played the character of Vermont innkeeper Dick Loudon.

Continue Reading Below
Much like the predecessor, ‘The Bob Newhart Show’, ‘Newhart’ was an instant success and was much applauded by the critics and the audience alike. it even won for itself several Emmy nominations. The show ended in 1990, after eight seasons and 182 episodes.
Two years later in 1992, he came up with yet another television series called, ‘Bob’. The television series had him playing the role of a cartoonist. The show despite having favourable response from the critics did not go down well with the audience due to which it was cancelled shortly after the second season.
In the 1990s and 2000s, he released a couple of his comedy albums including, ‘Off The Record’, ‘The Button-Down Concert’ and ‘Something Like This’. Beginning 2001, he made several television appearances the last of which was in 2013 for the sixth season of ‘The Big Bang Theory’. 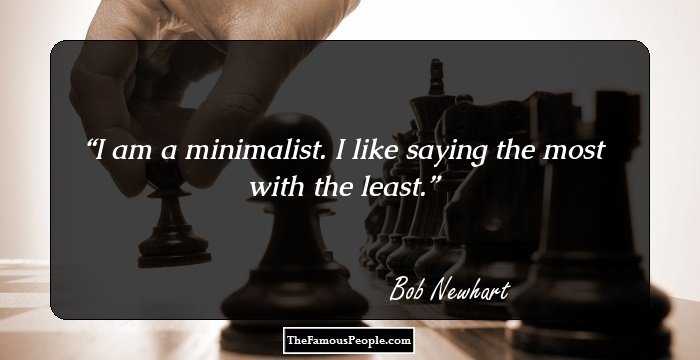 His ‘The Bob Newhart Show’ aired in 1971, on CBS as a sitcom was a major hit. It ran for six seasons, airing 142 episodes. The show ranked in Top 20 during its first three seasons, garnering two Emmy nominations and one Golden Globe nomination for him in the category of ‘Best TV Actor- Musical/ Comedy’. In 2007, the TIME magazine placed the show in its list of ‘100 Best TV Shows of All-TIME’.

He is the proud recipient of the prestigious Grammy Award thrice for Best New Artist, Best Comedy Performance and Album of the Year. The latter award received for ‘The Button-Down Mind of Bob Newhart’ created history by being the first every comedy album to receive the honor.
In 1993, he was inducted in the Academy of Television Arts & Sciences Hall of Fame. Additionally, he received a star on the Hollywood Walk of Fame in 1999.
He was conferred upon with the Mark Twain Prize for American Humor in 2002.

Though he has been nominated several times at the Primetime Emmy Awards in various categories, he finally received one in 2013, for Outstanding Guest Actor in a Comedy Series for his character of Professor Proton (Arthur Jeffries) on ‘The Big Bang Theory’. 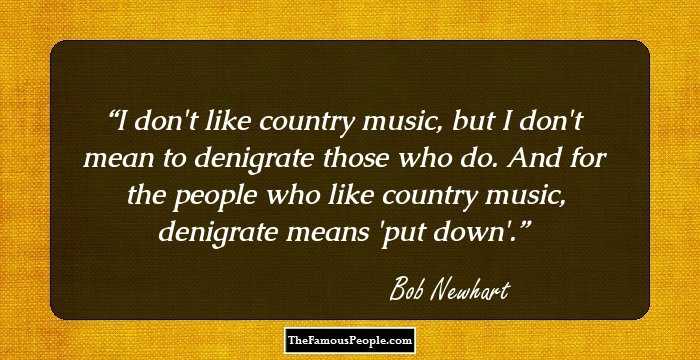 Bob Newhart tied the knot with the daughter of character actor, Bill Quinn, Virginia ‘Ginnie’ Quinn on January 12, 1963. The couple has been blessed with four children, Robert, Timothy, Jennifer and Courtney.

In 1985, following attack of polythemia due to heavy and incessant smoking, he was rushed to the hospital. He not only recovered early but has since quit smoking as well.
Trivia
This stand-up comedian who jumped to fame with his debut comedic album articulates with a stammer that is artificial or self-made!

Quotes By Bob Newhart | Quote Of The Day | Top 100 Quotes

See the events in life of Bob Newhart in Chronological Order