Alan Arkin is an Oscar winning actor, director, comedian, musician and singer born in New York City to Jewish parents in the first half of the twentieth century. With a film career spanning across more than 60 years, Arkin has acted in more than 100 films and has won many awards and nominations. He was fond of music and acting from his childhood. He started taking acting lessons from the age of ten and continued in that direction even when his family moved to Los Angeles. He later studied drama in different institutions and also learnt about the psychological approach to acting from Benjamin Zemach. However, he began his career as the lead singer in folk music group he had formed with three of his friends. Later he was drawn to stage acting and went to New York to try his luck at the Broadway. Although he later became more famous as a film star he has never left stage acting and has made his mark in all three mediums; i.e. stage, television and film. Tom Cruise
26th March In History
DID WE MISS SOMEONE?
CLICK HERE AND TELL US
WE'LL MAKE SURE
THEY'RE HERE A.S.A.P
Quick Facts

American People
Actors
Directors
American Men
New Yorkers Actors
Childhood & Early Life
Alan Wolf Arkin was born on March 26, 1934 in Brooklyn, New York City. His father, David I. Arkin, was a painter, writer and lyricist of considerable repute. His mother, Beatrice (nee Wortis), was a teacher.
Alan started taking acting lessons from the age of 10. When Alan was eleven years old, his family shifted to Los Angeles. There he was admitted to Franklin High School. Concurrently, he continued his training in different acting schools.
From 1951 to 1953, Alan studied drama at Los Angeles City College. After graduation, he entered Bennington College in Vermont for further studies and passed out from there in 1954. . 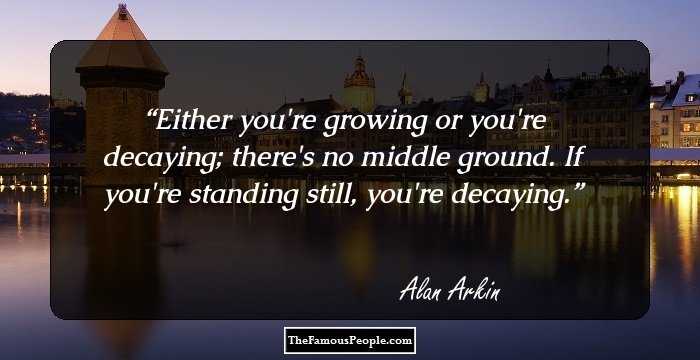 Continue Reading Below
Career
Alan Arkin began his career as a struggling actor playing small roles on stage and television, sustaining himself by doing odd jobs. However, his focus at that time was on singing and he formed a vocal-group specializing in folk music called ‘The Terrier’. He was guitarist and the lead singer of the group.
In 1956, they reworked on the traditional calypso song, ‘The Banana Boat’. The song, with another title, 'Hill and Gully Rider', became a big hit, reaching #4 at the Billboard. The following year, the group appeared in film called ‘Calypso Heat Wave’, where they sang ‘The Banana Boat Song’ and ‘Choucoune’.
In 1958, he left the group to join a children’s folk song group called The Babysitters. In the same year, he made his Off-Broadway debut as a singer in ‘Heloise’.
In 1959, he joined the Compass Theatre in St. Louis, Missouri. However, he did not stay with them for long. Very soon, he moved to Chicago to become one of the founding members of The Second City, an improvisational comedy group.
In 1961, Arkin went back to New York to make his Broadway debut with a musical titled ‘From the Second City’. He wrote the lyrics and also did the sketches.
In 1963, he starred in Broadway comedy ‘Enter Laughing’ and won a Tony Award for it. This was also the year, he wrote and acted in a short film called, ‘That’s me’.
In 1964, Arkin made his television debut, appearing as ‘Ted Miller’ in ‘The Beatnik and the Politician' episode of ‘East Side/West Side’ drama series. At the same time, he continued with his Broadway engagements, appearing as Harry Berlin in ‘Luv’.
In 1966, he made his directorial debut with an Off-Broadway production called ‘Eh?’ His first major film, 'The Russians Are Coming, the Russians Are Coming' also released in May 1966, earned him number of awards and nominations.
Subsequently, he began to work in all three mediums. Among his works on stage ‘Little Murders’ (1969), ‘The White House Murder Case’ (1970) and ‘Sunshine Boys’ (1972) are most significant.
Continue Reading Below
However, from 1966 onwards he began to concentrate more on movies. Quickly, he established his versatility by appearing in all kinds of films. While 'The Russians Are Coming' was a comedy, his 1967 movie ‘Wait Until Dark’ was a psychological horror thriller film, where he appeared as a violent criminal.
In 1968, he again starred in two very different types of pictures; ‘Inspector Clouseau’ and ‘The Heart is a Lonely Hunter’. The later is considered one of his best films and he won several awards and nominations for this work.
‘Popi’ (1969) was another of his major films of this period. Also in 1969, he made his directorial debut with a 12-minute children's film, titled ‘People Soup’. It starred his sons Adam and Matthew.
With a film career spanning six decades, Arkin has acted in more than 100 films and won number of nominations and awards irrespective of the film’s box office success. For example, ‘Catch-22’, released in 1970, was regarded as a commercial and critical failure; but Arkin earned two nominations.
‘Hearts of the West’ (1975) and ‘The In-Laws’ (1979) are Arkin’s two other major works of the 1970s. This was also the decade when he made his feature directorial debut with ‘Little Murders’ (1971) and received great acclaim for it. ‘Fire Sale’, another film directed by him, was also released in 1977.
He began the 1980s by starring in comedy film called ‘Simon’ and was nominated for Saturn Award for Best Actor. ‘Improper Channels’ (1981), ‘Joshua Then and Now’ (1985), and ‘Escape from Sobibor’ (1987) are three of his most acclaimed work of this decade.
Very soon, he began to slow down wishing to find more time for his family. Yet, he appeared in a number of quality movies like ‘Edward Scissorhands’ (1990), ‘Glengarry Glen Ross’ (1992), ‘Indian Summer’ (1993), ‘Mother Night’ (1996) and ‘Slums of Beverly Hills’ (1998).
Along with working in films he has concurrently worked on stage and television. However, since early 1970s he abandoned stage acting because that was too demanding and began to concentrate on directing. However, in 1990s, he once again appeared in a play he wrote, ‘Virtual Reality’.
As 2000 set in, Arkin further limited his activities. Yet, he produced number of masterpieces like ‘Thirteen Conversations About One Thing’ (2001), ‘Eros’ (2004), ‘Little Miss Sunshine’(2006), and ‘Argo’ (2012) etc. His last released film ‘Love the Coopers’ (November 2015) was a box office hit.
Continue Reading Below 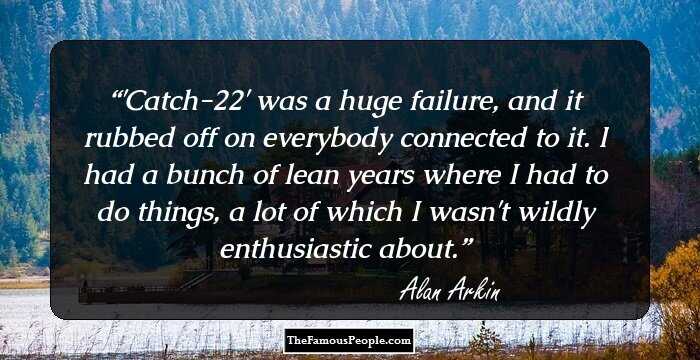 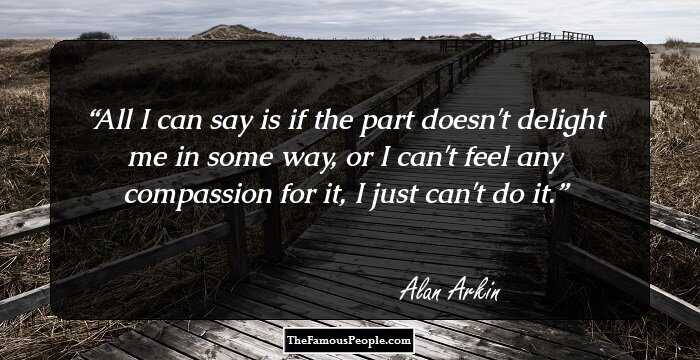 Personal Life & Legacy
Alan Arkin first married Jeremy Yaffe in 1955. They have two sons: Adam and Matthew Arkin. The marriage ended in a divorce in 1961.
He next married actress-screenwriter Barbara Dana in 1964. They have son Anthony (Tony) Dana Arkin. The couple got their divorce sometime in the middle of 1990s.
In 1996, Arkin married psychotherapist, Suzanne Newlander. They live in Carlsbad, California. His three sons have now been established as television, film and stage actors.

See the events in life of Alan Arkin in Chronological Order