Advanced Search
The cute little guy who wooed the world with his innocence and charm as a child actor before blossoming into an equally talented adult actor, Robert Blake is someone who has never been a stranger to fame and success. Born to vaudeville performers, he was exposed to show biz at a young age. Whenever his parents put up an act, Robert and his siblings would also be made to participate in it. Thus, he became a natural at performances—confident with no stage fear. He was chosen by MGM to star in the comedy series ‘Our Gang’ when he was just five! With his sweet face and cuteness he won over the audiences who could not get enough of the little boy. However it was an altogether different scene at home. His alcoholic father would beat him, lock him in closets, and as he revealed in a later interview, sexually abuse him. Tired of the abuse he ran away from home as a teenager to make his living as an actor. After struggling for years, he did become a successful television and film actor and won several awards for his performances. However the demons of his past caught up with him and he was accused of murdering his wife. Though later acquitted of the charges, he became broke and penniless. American People
New Jersey Actors
Virgo Actors
American Actors
Actors Who Are In Their 80s
Childhood & Early Life
He was born to Elizabeth Cafone and Giacomo Gubitosi in New Jersey. His birth name was Michael James Vincenzo Gubitosi and he had two siblings.
His father used to work for a can manufacturer but later on he set up a song-and-dance act with his wife and they became vaudeville performers. Mickey—as Robert Blake was called then—along with his siblings also appeared in the acts.
The Gubitosi household was a troubled one. The young boy was tortured and physically abused. He was frequently beaten up by his father who also locked him up in closets for long periods of time.
The family moved to Los Angeles where the three children began to get work as movie extras. 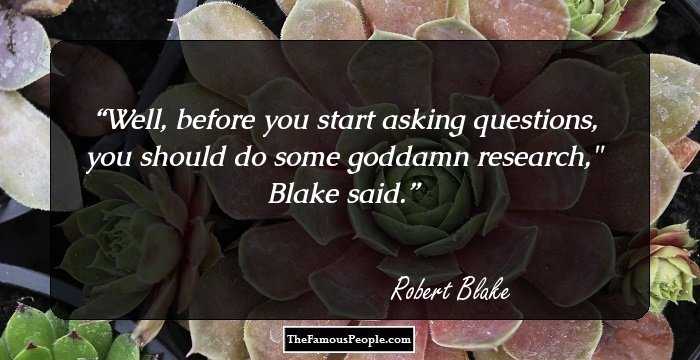 Quotes: You
Continue Reading Below
Career
His acting career began at the tender age of five. He made his film debut as Toto in an MGM movie called ‘Bridal Suite’ which also had Annabella and Robert Young.
He was a good looking kid and was chosen by MGM to appear in their comedy series ‘Our Gang’ which comprised of short subjects. From 1939 to 1944 he appeared in 40 of the shorts and was considered the series’ leading actor.
Though he initially used the name Mickey Gubitosi, he later acquired the stage name Bobby Blake in 1942.
He played the role of Tooky, an injured little boy in the 1942 film, ‘Andy Hardy’s Double Life’ which was a comedy having Mickey Rooney in leading role.
The year 1944 was a good one for Blake as he started playing “Little Beaver”, a Native American boy in the Red Ryder Western series. He acted in a total of 23 movies in the series till 1947.
He played the childhood version of the noted violinist Paul Boray in the film ‘Humoresque’ in 1946. In 1948, he played a small role in the Humphrey Bogart starrer film, ‘The Treasure of the Sierra Madre’.
During the 1950s he joined the army and was away from films for a short while. He returned to acting and appeared in films like ‘Town Without Pity’ (1961), ‘Ensign Pulver’ (1964), ‘The Greatest Story Ever Told’ (1965).
He gave a stunning performance as the killer Perry Smith in ‘In Cold Blood’ (1967). The fact that he resembled the real life killer in appearance gave the film a frightening credibility. This role played a key role in establishing his position as a character actor in Hollywood.
Even though he continued appearing in films over the 1970s, it was his role in the television series ‘Baretta’ which added to his popularity the most. He portrayed Anthony Baretta, a detective who is a master of disguise in the drama series.
Continue Reading Below
Throughout the 1980s and 1990s he focused more on television. He appeared in the miniseries ‘Blood Feud’ (1983) and the 1995 television series ‘Hell Town’ in which he played a priest. 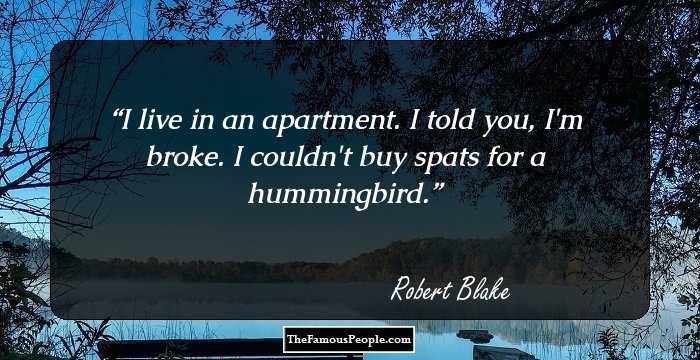 Quotes: You, I
Major Works
He first tasted major success as a child playing the role of “Little Beaver” in the Red Ryder Western series. He was young, smart, good looking and talented and won the audience’s hearts with his performance.
He became very popular for playing the lead in the American detective television series ‘Baretta’ which ran from 1975 to 1978. He portrayed Detective Anthony Vincenzo "Tony" Baretta in the show.
Awards & Achievements
He won an Emmy Award for his role of Anthony Baretta in the detective television series ‘Baretta’.
He was presented with the Former Child Star “Lifetime Achievement” Award for his role in ‘Our Gang’ by the Young Artist Foundation in 1995.
Personal Life & Legacy
He married actress Sondra Kerr in 1961. They had three children and divorced in 1983.
He met Bonnie Lee Bakley in 1999 and had an affair with her which resulted in her pregnancy thus forcing Blake to marry her. He however resented her though he doted on their new baby daughter.
In 2001, Bakley was shot to death while sitting in a car outside a restaurant. Blake was the prime suspect and was finally acquitted of murder charges in 2005. But he was found liable in a California civil court for her wrongful death and was asked to pay US$30 million to Bakley’s children.
He appealed against the verdict. The appeals court upheld the verdict but reduced the penalty by half. The courts cases left him under the debt and he filed for bankruptcy.

See the events in life of Robert Blake in Chronological Order