Elvis Aaron Presley was a noted American singer and actor. He is most acknowledged for his contribution to the Rock and Roll genre of Western music. Also known as ‘The king of Rock and Roll’, Presley popularized rockabilly, which was a blend of rhythm and blues and Country music. His performance style was a combination of energy and erotic sensuousness. He was greatly influenced by the African-American singers like Arthur Crudup and his music cut across racial prejudices. This made him quite a controversial figure. His gorgeous looks and scintillating stage performances brought Hollywood to his threshold. He acted in several movies and even composed music for movie soundtrack albums. After a seven year long break from live performances, Presley returned to the small screen with ‘Elvis’, a show that became an instant hit. He was the first performer whose concert was broadcast via satellite. He received numerous music awards and was included in several music halls of fame. He is also the best selling solo artist in the history of music. One of the most celebrated music and cultural icons of the twentieth century, Elvis Presley died at the age of 42 due to drug overdose. Nick Name: The King of Rock and Roll, The King

American Celebrities
American Men
Male Singers
American Singers
Male Pop Singers
Childhood & Early Life
Elvis Presley was born in the family of Vernon Elvis Presley and Gladys Love, on January 8, 1935, at Tupelo, Mississippi.
His identical twin brother, Jesse Garon Presley, was delivered stillborn 35 minutes before him.
Presleys were a religious family and attended an Assembly of God Church regularly. He found his first musical inspiration here.
His first public performance was on October 3, 1945 at the Mississippi-Alabama Fair and Dairy Show where he sang ‘Old Shep’.
On his twelfth birthday, he was gifted his first guitar. He received basic lessons of guitar from his uncles and the new pastor at the family's church..
He was greatly inspired by country singers like Ted Daffan, Ernest Tubb and Southern Gospel singer, Jake Hess.
Younger brother of Mississippi Slim (a singer who had a radio show on Tupelo's WELO during the later 1940s) was a classmate of Presley and often took him to the station. Slim arranged two on-air performances for Presley when he was just 12.
In June 1953, when he graduated from high school, Presley had already chosen music as his career. 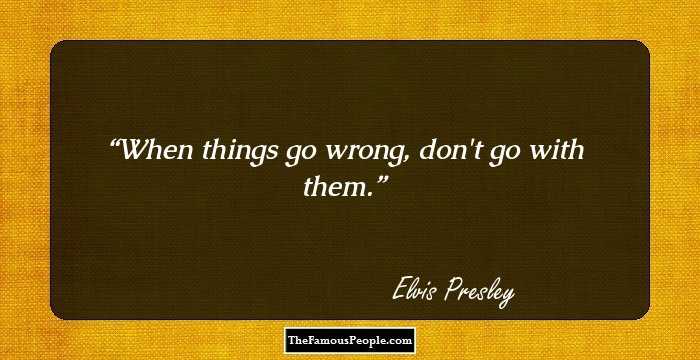 Continue Reading Below
Career
Elvis Presley’s first demo record was cut at Sun Studio. On July 5, 1954, DJ Philips recorded Presley singing Arthur Crudup’s ‘That’s all right’. Three days later, the song was played on air and it became a huge hit. The same song was his first single.
Backed with guitarist Scotty Moore and bassist Bill Black, Presley played publicly at the Bon Air Club on 17th July,1954. They were soon joined by a drummer.
By that time, Presley had appointed Tom Parker as his executive manager. Both Phillips and Parker negotiated for a contract between Elvis Presley and ‘RCA Victor’. The deal was struck on November 21, 1955 and Elvis’s Sun contract was sold for a price of $40,000.
On January 28, 1956, Presley made his television debut on ‘Stage Show’. This was followed by ‘Milton Berle Show’, ‘Steve Allen Show’ and many more.
In March 1956, he appeared for an audition for the movie ‘Love me Tender’ with the Paramount Movie Studios. He was signed on to do six more movies.
About two weeks after his audition, Elvis received his first gold record for "Heartbreak Hotel," which had sold one million copies.
On December 20,1957, Presley received a draft notice. He could have got himself excused from joining the military but he chose to enter the US army as a common soldier. He was away from the music scene for two years, but his manager Parker excelled in keeping up his fame.
On March 2,1960, he was discharged from the army with the rank of sergeant and he returned to the United States.
His first comeback album was ‘Elvis is Back’ which was followed by ‘Something for Everybody’. He soon began appearing in TV shows like ‘The Frank Sinatra Timex Special’.
Continue Reading Below
Presley was offered a number of movies at this stage. Most of them were same old musical comedies like ‘Paradise, Hawaiian Style’.
On December 3, 1968, he returned to the stage in the acclaimed televised comeback special Elvis. The success of the show buoyed him to produce his first non soundtrack album ‘From Elvis in Memphis’.
He met the then president Richard Nixon, on December 21, 1970.
Elvis Presley kept on with his album recordings, tours, concerts and shows even with poor health. 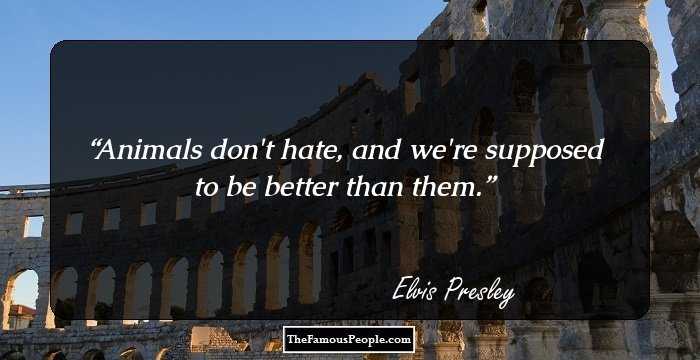 Major Works
It is estimated that Elvis had sold more than one billion records globally. His most memorable hits include ‘Jailhouse Rock’, ‘Hound Dog’, ‘Blue Christmas’, ‘My Baby Left Me’.
He starred in 31 feature films in the central role. Most remembered of his movies are ‘Love me Tender’, ‘Wild in the Country’, ‘Blue Hawaii’, ‘King Creole’, among others.
He also appeared in three television specials, –‘Elvis’, ‘Elvis: Aloha from Hawaii, via Satellite, and ‘Elvis in Concert’.
Awards & Achievements
Elvis received 14 Grammy nominations and won three times for the album ‘How Great Thou Art’ (1967), the album ‘He Touched Me’(1972) and his live Memphis concert recording of the song ‘How Great Thou Art’.
In 1971, NARAS gave him the Lifetime Achievement Award. Six of Elvis' recordings have been included into the NARAS Hall of Fame.
On January 16, 1971, The United States Junior Chamber of Commerce named Elvis One of the Ten Outstanding Young Men of the Nation. 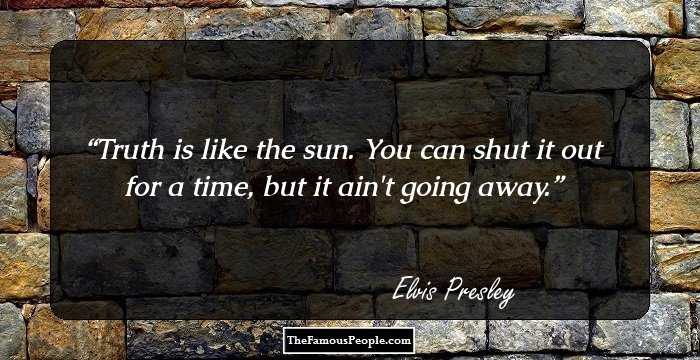 On May 1, 1967, Elvis Presley married Priscilla Beaulie at the Aladdin Hotel in Las Vegas. They divorced in January 1973.

His drug addiction worsened after the divorce. On the morning of August 16, 1977, Elvis was found on the floor of his bathroom at Graceland. The doctors said that the immediate cause of death was cardiac arrest. He was only 42.

Quotes By Elvis Presley | Quote Of The Day | Top 100 Quotes

See the events in life of Elvis Presley in Chronological Order