Ashlee Simpson rose to fame as a participant in the reality show, ‘Newlyweds: Nick and Jessica’. She also became a well-known figure with her debut record, ‘Autobiography’. She began dancing from a very young age and then became the youngest person ever to be admitted into the ‘School of American Ballet’, which was a prized moment in her life. She is the younger sibling of the renowned, Jessica Simpson, but she soon began garnering her own fan-base through her vocal talent and her commendable acting skills. She then gained even more popularity with ‘The Ashlee Simpson Show’, followed by two other hit albums, ‘I Am Me’ and ‘Bittersweet World’. Compared to her sister, Ashlee has often been described as a fiery personality with a blunt attitude. The young starlet has appeared in a number of television shows and films including, ‘Malcolm in the Middle’, ‘7th Heaven’, ‘The Hot Chick’, ‘Undiscovered’ and has even appeared in ‘CSI: NY’. Apart from acing in television shows and films, she is also an ardent theatre fan and has appeared in a Broadway show as well. She is also the recipient of numerous nominations and awards. Currently, Ashlee lives in Los Angeles and one of her favorite pastimes is vintage shopping. American People
Actresses
American Women
Texas Actresses
Libra Singers
Childhood & Early Life
Ashlee Nicole Simpson was born to Tina Ann and John Truett Simpson in Waco, Texas. Her older sister, Jessica Simpson, is also an established actress and singer.
When she was three years old, she began learning ballet. She was later accepted into the prestigious, ‘School of American Ballet’ at the age of 11.
She studied at Prairie Creek Elementary and Richardson North Junior High. In her teenage years, she suffered from a chronic eating disorder.
The family relocated to Los Angeles, California in 1999, so that her sister Jessica could focus on a singing career. It was during this time that Ashlee was cast in her first television commercials.
At this time, her sister’s career was taking off. Ashlee would occasionally join her sister on stage as a back-up dancer, where she got noticed. 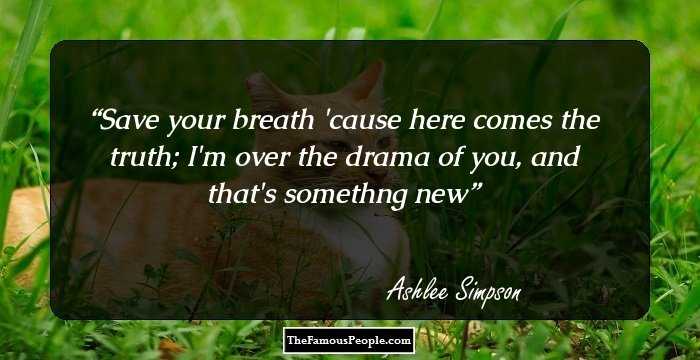 Quotes: You
Continue Reading Below
Career
In 2001, she made a minor appearance in the television series, ‘Malcolm in the Middle’. The next year, she appeared in the Warner Bros family drama, ‘7th Heaven’, where she stayed for two seasons. A few months later, she was cast in ‘The Hot Chick’, alongside Rachel McAdams.
She released her first single, ‘Just Let Me Cry’ for the 2003 Lindsay Lohan movie, ‘Freaky Friday’. Her track catapulted her to fame and earned her a record deal with ‘Geffen Records’.
In 2004, she released her debut studio album, ‘Autobiography’, which became her first hit album and was featured on the Billboard 200. The album became an instant hit. The same year, she made a brief appearance on ‘Newlyweds’, her sister’s reality show.
From 2004 to 2005, she also had her very own reality television series, ‘The Ashlee Simpson Show’, which went on to garner rave reviews from American audiences.
She went for her first North-American tour in 2005. Her second studio album, ‘I Am Me’ also released the same year, was debuted at the number one spot at the time of its release. The next year, she was cast as ‘Roxie Hart’ in the production of ‘Chicago’.
In 2007, she recorded her third studio album, ‘Bittersweet World’ along with producers Timbaland, Kenna and Chad Hugo. Unlike her first two albums, the album received mixed reviews.
In 2009, she returned to television with the series ‘Melrose Place’, where she played the role of ‘Violet Foster’. She appeared in twelve episodes in the series and then reprised her role in the Broadway production ‘Chicago’.
From 2011 to 2013, she appeared in ‘America’s Next Top Model’ and the crime-comedy film, ‘Pawn Shop Chronicles’.
Major Works
Her debut album, ‘Autobiography’ sold more than 5 million copies worldwide and was certified a triple platinum album by the RIAA in the US. Three singles from the album; ‘Shadow’, ‘La La’ and ‘Pieces of Me’ charted all major US countdowns including the Billboard 200. At the time of its release, it was considered the ‘biggest debut album by a female artist’.
Continue Reading Below
Awards & Achievements
She won the Billboard Music Award for ‘Best New Female Artist of the Year’ in 2004.
She won a Teen Choice Award for ‘Choice Fresh Face’, in 2004.
In 2005, she won the MTV Asia Award for ‘Favorite Breakthrough Artist’.
In 2006, she won the BMI Award for her song ‘Pieces of Me’.
She won an MVPA Award for the single, ‘Outta My Head (Ay Ya Ya)’ for the category of ‘Best Art Direction’, in 2008.
Personal Life & Legacy
In 2006, she dated Pete Wentz and two years later, she was spotted wearing a diamond ring. The duo were then married two years later, immediately after which, she confirmed her pregnancy. She has a son, Bronx Mowgli Wentz.
She divorced Wentz in 2011, following which she got into a relationship with Vincent Piazza. She called off the relationship with him a year later.
Trivia
This famous actress and singer-songwriter has her own clothing line called, ‘Wet Seal’.

See the events in life of Ashlee Simpson in Chronological Order