Antonie van Leeuwenhoek was a renowned scientist of the seventeenth century whose pioneering research works, laid the founding stone for emergence of microbiology as a stream. Hailed as the ‘Father of Microbiology’ this talented biologist chanced upon scientific research by mere coincidence. Antonie was a young entrepreneur, who established his own linen business and in search of a high quality magnifying lens, to be used for inspection of thread used in the linen, ended up devising a new technique of creating lens which can provide magnification up to 500 times. Upon encouragement from friend and physician Graaf, Antonie used the improved design of microscope to make many significant discoveries, which laid the foundation for evolution of microbiology. Beginning with identifying the first bacteria to describing the structure of RBC’s to the detailed study of deadly disease he suffered from; this eminent scientist contributed to scientific advancement even in his death. As more of his works began to get published his repertoire increased exponentially; he was visited by many eminent personalities throughout his lifetime which include the likes of Russian Tsar Peter the Great, German philosopher Gottfried Wilhelm Leibniz and Prince William III of England. Though this expert lens man shared his findings with the public, he preferred to work alone and kept the technique of making high precision microscope a closely guarded secret until his death. Read on to know more about his works and achievements Theodor Schwann
DID WE MISS SOMEONE?
CLICK HERE AND TELL US
WE'LL MAKE SURE
THEY'RE HERE A.S.A.P
Quick Facts

Dutch People
Biologists
Microbiologists
Dutch Men
Male Biologists
Childhood & Early Life
On October 24, 1632, in the Delft city of Netherlands, this famous microbiologist was born to parents Philips Antonysz van Leeuwenhoek and Margaretha.
Antonie and his four elder siblings lost their father at quite an early age and their mother remarried after Philips’ demise. The young lad went to school for a short while in Leyden but then had to move to his uncle’s place in Benthuizen.
At the tender age of sixteen Leeuwenhoek was engaged in a draper’s shop in Amsrterdam where he learnt the ropes of the trade. Eventually he returned to his native city of Delft in the mid-1650s and went on to establish himself as a fabric merchant. 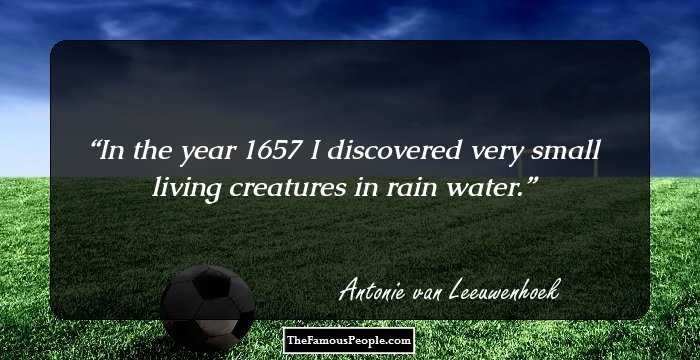 Continue Reading Below
Career
As the popularity of his linen store increased so did Antonie’s status in the society. He decided to utilize his new found fame to participate in the municipal politics. In 1660, he was granted the title of chamberlain and in this capacity he was in charge of managing the Delft sheriffs' assembly chamber. Later he would hold the positions of surveyor and wine gauger.
Leeuwenhoek used magnifying glasses for inspecting the quality of thread in his draper linen but he was not satisfied with the magnification provided by the available lenses. Thus he started making his own lenses and with time and expertise he devised microscopes that are believed to provide magnification of up to 500 times.
Armed with these powerful magnifying devices, he started recording his observations of minute creatures such as molds and lice. His friend Reinier de Graaf, who was a physician, encouraged Antonie to pursue his study of minute organisms and even helped establish a correspondence between the Royal Society in London and Leeuwenhoek.
Starting in 1673, Antonie began a series of communication with the Royal Society. His first published work included his study of lice, molds and bees.
In 1674, he used his hand made microscopes to observe miniscule living objects in various water bodies, human gut. He dubbed these minute living beings as “very little animalcules”, and estimated their sizes.
This skilled lens man accounted his studies on the male gametes, in 1677. He studied specimens of Spermatozoa in insects, humans and canines.
He then made important observations regarding the human eye, striated and non-striated muscle fibers and even studied insects and plant structures and asexual reproduction in aphids.
He then studied unicellular organisms, in particular yeast, and made significant observations regarding their composition in 1680. The same year he was granted a fellowship in the Royal Society of London.
’Philosophical Transactions of the Royal Society’, the journal of Royal Society published most of his works.The very first illustration of bacteria was depicted by Leeuwenhoek and was published in the 1683 edition of ‘Philosophical Transactions’.
Continue Reading Below
The eminent microbiologist also studied plaque formation in the human oral cavity in 1683. It is believed that he made these observations using his own teeth and even his own wife and daughter.
In 1684, he studied the works of Marcello Malpighi’s demonstration of the blood capillaries. In continuation to Marcello’s works, Antonie studied the red blood cells and provided a fairly accurate description.
In 1702, while studying rotifers and nematodes he made the observation that microorganisms or the animalcules can be propagated by wind, water and air.
Leeuwenhoek continued his microscopic observations throughout his life and by the time of his death he had published more than 500 scientific letters in the Royal Society journal and other scientific publications. He even made observations of the rare and deadly muscular anomaly he was suffering from, which eventually led to his death. 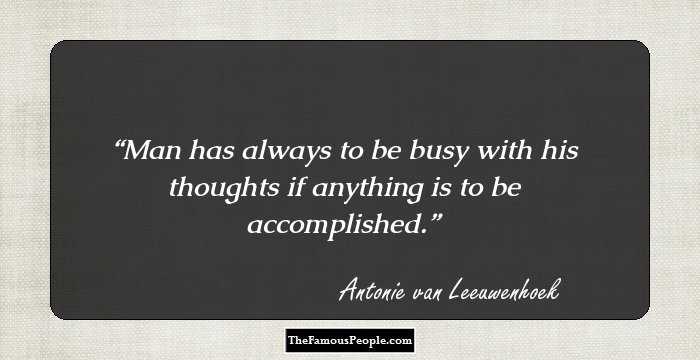 Major Works
Though Leewenhoek is sometimes considered as inventor of microscope, it is not the truth. But it cannot be denied that his design of microscope and the observations which followed paved the way for many important discoveries and laid the foundation for emergence of microbiology.
Awards & Achievements
This eminent scientist is referred to as the ‘Father of Microbiology’ and the Royal Society of London honoured his contribution to the scientific world by granting him a fellowship. 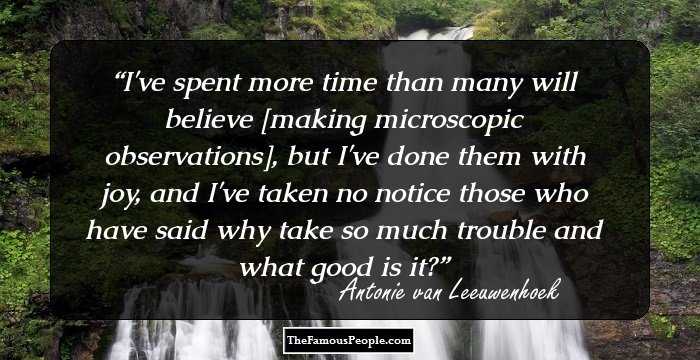 Quotes: Believe
Personal Life & Legacy
Antonie was married to Barbara de Mey in July 1654 and the couple were blessed with five children of whom only one survived.
Following the demise of Barbara, Antonie entered the wedlock with Cornelia Swalmius in 1671.
This pioneering scientist breathed his last on August 26, 1723 after battling a rare abnormality of the muscles in the midriff region. Since he made extensive observations regarding his illness, the condition has been named as the ‘Van Leeuwenhoek’s Disease’.
Antonie’s original specimens were archived by the Royal Society of London and in 1981 microscopist Brian J. Ford conducted a further study to expand Leeuwenhoek’s original works.
Recommended Lists:
Scientists #141
Inventors & Discoverers #39