Anthony Trollope, an English novelist who lived during the 19th century, is best remembered for his ‘Chronicles of Barsetshire’ series, which consisted of six novels. ‘The Warden’ was the first novel of this series and it was also his first successful novel. He wrote during the Victorian times and his novels provide a rich insight into the politics, gender issues, and society of that time. Readers found his humorous insights into the everyday lives of ordinary people quite endearing. He authored 47 novels, two plays, an autobiography, a number of travel books and short stories, and numerous articles, lectures, and reviews. In his autobiography, he admitted that he had a writing schedule that he strictly adhered to and that finance was his main motive for writing. This was not taken nicely by the critics and writers of that time. His reputation as a writer suffered a lot due to this admission; however, during the mid-20th century, critics and readers rediscovered the brilliance of Trollope’s writings. Actor Sir Alec Guinness, novelist Sue Grafton, politician Sir John Major, screenwriter Harding Lemay, and economist John Kenneth Galbraith are some of the most famous fans of Trollope.

Charlotte Bronte
Novelists #295
Writers #1009
Continue Reading Below
DID WE MISS SOMEONE?
CLICK HERE AND TELL US
WE'LL MAKE SURE
THEY'RE HERE A.S.A.P
Quick Facts

British People
British Men
Male Writers
Taurus Writers
Male Novelists
Childhood & Early Life
Anthony Trollope was born on 24 April 1815, in the beautiful district of Bloomsbury, which is located in the West End of London. He was the fourth child of Thomas and Frances Trollope.
His childhood was not a happy one because the family was always struggling with finances.
In 1822, he started attending the Harrow School as a day-boy. He was able to get admission in this school because his family had a farm in the area. The three years he spent here were miserable because he was constantly bullied here.
In 1825, he was able to get admission in Sunbury Private School, which was an elite school. In 1827, he attended Winchester School. However, due to the poor financial condition of his family he had to shift back to Harrow School in 1830.
In order to improve the family’s situation, his mother moved to America in 1830. There she set up a bazaar to sell British commodities and goods. However, the enterprise was a failure. In 1832, she wrote ‘The Domestic Manners of the Americans,’ which was well received in England.
In 1834, the family sold off their property in England and settled in Burges, Belgium. At this point, the family was completely dependent on Frances Trollope’s earnings as a writer.
It was only when he moved to Ireland that he started making friends and enjoying the outdoor life. He became a passionate fox hunter. 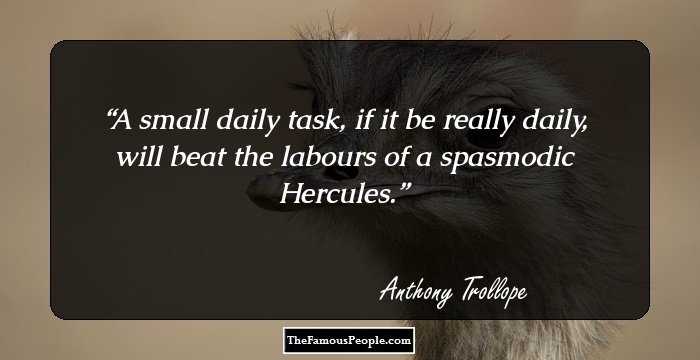 The Best Black Actresses Of All Time
Career
Anthony Trollope’s career started in 1834, when he started working as an assistant master in Brussels. His goal was to learn enough German and French so that he could be commissioned in one of the Austrian cavalry regiments. The very same year he used his family’s connections to get a job as a junior clerk in the General Post Office in London.
He spent seven years in this job and hated every minute of it. He had very few friends, his superiors were very critical of his job performance, and he was barely able to make ends meet.
When he got an offer of transfer to Banagher, Ireland, he readily took it up. It was in Ireland that his life and career took a whole new turn. He was posted as a deputy postal surveyor and his pay was quite good.
Anthony Trollope began writing in 1843 and his first novel was ‘The Macdermots of Ballycloran,’ which was published in 1847. It was followed by ‘The Kellys and the O’Kellys’ in the following year.
His career in the post office also took an upward turn when he was promoted and transferred to Mallow in 1845. In 1851, he was transferred to west England. There he began writing ‘The Warden,’ the first in the series of six novels that comprised the ‘Chronicles of Barsetshire.’ It was published in 1855.
In 1857, ‘Barchester Towers’ was published; it was the next in the series of ‘Chronicles of Barsetshire.’ It is regarded as one of his best works. The other novels in this series are ‘Doctor Thorne’ (1858), ‘Framley Parsonage’ (1861), ‘The Small House at Allington’ (1864), and ‘The Last Chronicle of Barset’ (1867).
Like his writing career, his post office career also saw a steady rise. By the middle of the 1860s, he was in a senior position at the post office and had travelled widely. He resigned from the post office in 1867.
In 1868, Anthony Trollope ran for a seat in the parliament and lost. He then decided to focus on his writing.
His ‘Palliser’ series, which consists of six novels, focused on the socio-political issues of those times. The main characters in these novels were Plantagenet Palliser, who is a politician and aristocrat, and his wife, Lady Glencora.
Continue Reading Below
‘Can You Forgive Her?’ (1864), ‘Phineas Finn’ (1869), ‘The Eustace Diamonds’ (1873), ‘Phineas Redux’ (1874), ‘The Prime Minister’ (1876), and ‘The Duke’s Children’ (1879) are the six novels that are part of the ‘Palliser’ series.
In 1871, Anthony Trollope wrote ‘Lady Anna’ while on a voyage to Australia to visit his son. The novel was published in 1874. The novel was not well received, but Trollope considered it one of his best works.
In 1872, he wrote ‘Australia and New Zealand,’ which focused on the good and the bad experiences that he had during his stay in Australia. The Australians were not particularly happy with the way they were portrayed in the novel.
He also wrote his autobiography, but it was published only after his death. 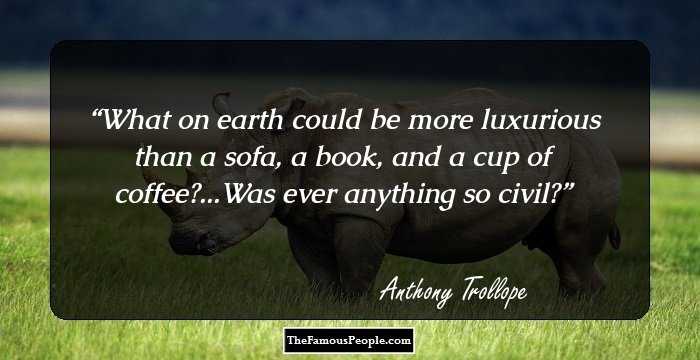 Major Works
‘The Warden’ was Anthony Trollope’s first successful novel and brought him into prominence. The novel provides an insight into the upper-middle-class lifestyle of English clergymen and effortlessly tackles the complex issues of social morality and human motivation.
‘The Way We Live Now’ is considered his masterpiece by critics. It is a satirical take on the rampant corruption that he witnessed in London after his return from Australia.
Family & Personal Life
In 1844, Anthony Trollope married Rose Heseltine, an English woman. They had two sons.
On November 3, 1882, he suffered a stroke while staying at Garland’s Hotel, London. He died on December 6. 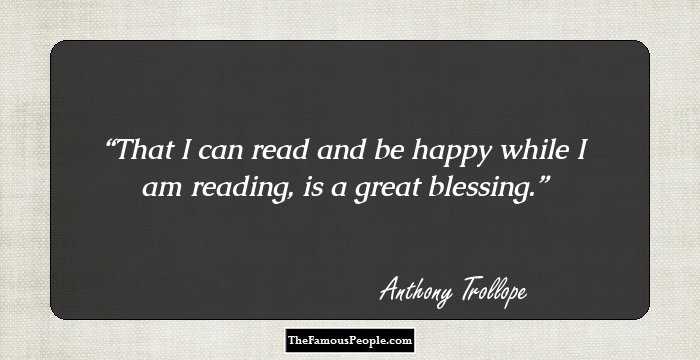 Quotes: I
Trivia
Anthony Trollope was a passionate fox hunter.
You May Like

Quotes By Anthony Trollope | Quote Of The Day | Top 100 Quotes

See the events in life of Anthony Trollope in Chronological Order