Advanced Search
Anna Freud was an Austrian psychologist, a pioneer in the field of child psychoanalysis, who defined the function of “ego” in psychology. The youngest daughter of Sigmund Freud, the father of psychoanalysis, Anna was devoted to her father and enjoyed developing psychoanalytic theory and practice. As a young woman she taught at elementary school, and her daily observation of children drew her to child psychology. She is most noted for her work with children and the concept of children undergoing analysis. She discovered that children often required different psychological treatment as compared to adults and emphasized the role that early disruptions in attachment could play a role in the subsequent development of psychological problems. Her experience as a school teacher added to her knowledge of ego psychology and helped her maintain The Hampstead Child Therapy Clinic. Her publication ‘The Ego and Mechanisms of Defense’ is considered to be a groundbreaking work in the development of adolescent psychology. During the World War II, she also established war nursery with an aim to help the children form attachments by providing continuity of relationships with the helpers and by encouraging mothers to visit as often as possible. Until the final years of her life, she travelled regularly to the United States to lecture, teach and visit friends. Her life was spent in constant search for useful social applications of psychoanalysis, especially in treating children and in learning from them. Tomas Tranströmer
DID WE MISS SOMEONE?
CLICK HERE AND TELL US
WE'LL MAKE SURE
THEY'RE HERE A.S.A.P
Quick Facts

British Celebrities
Women Psychologists
British Psychologists
British Female Psychologists
Women Intellectuals & Academics
Childhood & Early Life
She was born on December 3, 1895 in Vienna, Austria-Hungary, to Sigmund Freud, a neurologist now known as the ‘father of psychoanalysis’, and his wife, Martha Bernays.She had five elder siblings: Mathilde, Jean Martin, Oliver, Ernst and Sophie.
From an early age, she had a strained relationship with her mother and also remained distant from her five siblings. She had major difficulty in getting along with her sister Sophie, who was very attractive and with whom she rivaled for her father’s attention.
She also suffered from depression which caused chronic eating disorders and was repeatedly sent to health farms for thorough rest. Despite her misfits, she developed a close relationship with her father who was very fond of her.
She received most of her education from her father despite attending schools. In 1912, after completing her education from the Cottage Lyceum in Vienna, she traveled to Italy to stay with her grandmother. From there she went alone to England in 1914 but was soon forced to return to her homeland when the World War I broke out. 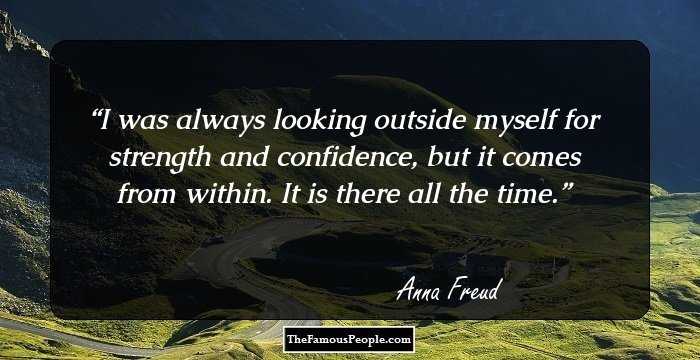 Quotes: Time, I
Continue Reading Below
Career
In 1914, upon her return to Vienna, she began teaching at the Cottage Lyceum, her old school. From 1915 to 1917, she served there as a trainee, and then as a teacher from 1917 to 1920.
In 1918, she became actively involved in her father’s psychoanalysis study in which she was the subject of his research. In 1922, she was able to present the results of this analysis to the Vienna Psychoanalytic Society in a paper titled ‘The Relation of Beating Fantasies to a Daydream’.
Later she became a member of the Vienna Psychoanalytic Society and began working with children in private practice. Within two years, she was offered a teaching position at the Vienna Psychoanalytic Training Institute.
From 1927 to 1934, she served as the General Secretary of the ‘International Psychoanalytical Association’. In 1935, she became the director of the ‘Vienna Psychoanalytical Training Institute’. Later, she published her book ‘The Ego and the Mechanisms of Defense’, a study that laid the groundwork for the field of ego psychology.
During this time she also founded the Hietzing School, along with Dorothy Burlingham and Eva Rosenfeld. The school was an attempt to create a more holistic educational curriculum informed by psychoanalytic principles.
In 1938, when the Nazi threat became unsustainable, she fled to London along with her father. In 1941, she formed the ‘Hampstead War Nursery’ which served as a psychoanalytic program and home for homeless children.
She also published three books ‘Young Children in Wartime’ (1942), ‘Infants Without Families’ (1943), and ‘War and Children’ (1943) based on her experiences at the war nursery.
She established the ‘Hampstead Child Therapy Course and Clinic’ and served as its director from 1952 until her death.
In 1965, she published her work ‘Normality and Pathology in Childhood’. In it she explained her hypothesis that children go through normal developmental stages against which everyone can be assessed, and that this capacity to develop is the key component of the diagnostic process.
Continue Reading Below
Later in life, she visited Yale Law School and conducted courses on crime and its effect on family relationships. In 1973, she published ‘Beyond the Best Interests of the Child’ with Albert Solnit and Joseph Goldstein. 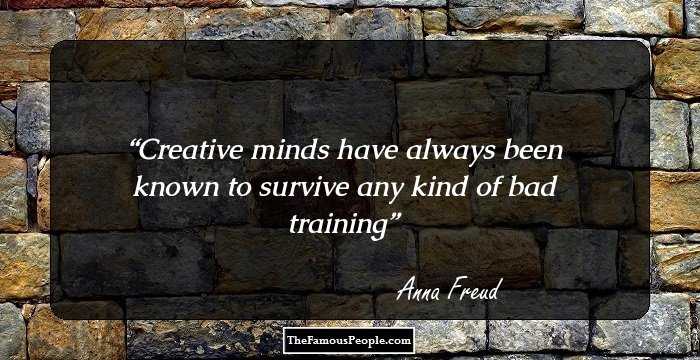 Major Works
She created the field of child psychoanalysis and her work contributed greatly to the understanding of child psychology. She noted that children’s symptoms differed from those of adults and were often related to developmental stages.
One of her most significant published works is ‘The Ego and the Mechanisms of Defense’ in which she outlined and expanded upon her father's theory of psychological defense mechanisms.
Awards & Achievements
In 1965, she received the Dolly Madison Award.
In 1967, she was named a Commander of the British Empire by Queen Elizabeth II.
In 1975, she was awarded an MD degree from the University of Vienna. The same year, she also received the Grand Decoration of Honor in Gold. 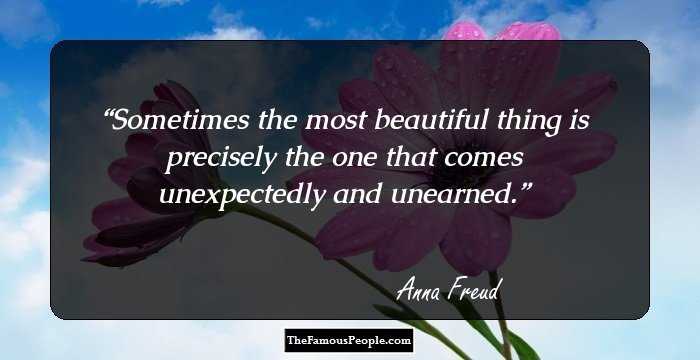 See the events in life of Anna Freud in Chronological Order