Angelus Silesius, who later got converted to a poet, was best known for his religious tracts. Though he was born in a Lutheran family, Silesius adopted Catholicism at a later stage of his life. His first tryst with the mystic ideologies of Catholic Church happened when he was a student at the prestigious ‘Leiden University’. The works of Jacob Bohme, the German poet of the medieval mystic era, left a deep-rooted impression on this physician’s mind. His association with Abraham von Franckenberg was a major turning point in his life. Through Franckenberg he was introduced to Kabbalist writings and Hermeticism. Though he started his career by working as a physician, he was never satisfied with the job. His repeated clash of opinions between the staunch Lutheran followers belonging to the Dutch royalty as well as his mystic ideologies, led to Angelus’ resignation from his position as the royal physician. After his conversion, he dedicated his life in propagating the mission of Counter Reformation through his religious epigrams. His most famous works were his anthology of religious poems, 'Heilige Seelenlust' and 'Der Cherubinische Wandersmann', the verses of which are included in several songs of worship. To know more about his life and personality read on the following biography.
Continue Reading Below German People
Priests
German Men
Leiden University
University Of Padua
Childhood & Early Life
Born in then native German province of Silesia on the 25th of December, 1624, Angelus was christened Johann Scheffler. He was the eldest child of his Lutheran parents, Stanislaus Scheffler, a Knight in the army of King Sigismund III, and Maria Hennemann daughter of a physician in the Habsburg Empire.
Displaying an artistic tendency since his childhood days, he composed and published his first poetic work ‘Bonus Consiliarius’, in 1642, at Breslau, where he attended the Saint Elizabeth’s Gymnasium. His teacher Christoph Koler, a noted poet, was one of the early influences during the formative years of Angelus’ life.
After completing high school, he attended the ‘University of Strasbourg’ in 1643. During his one year stay at the pro-Renaissance ‘Lutheran University’, he studied medicine and science.
In 1644, when the rest of the Europe was doused in religious clashes, the Dutch provided refuge to the oppressed. It was in this year that Scheffler enrolled in ‘Leiden University’ and made acquaintance with Abraham von Franckenberg, who was working on a compilation of Jacob Bohme’s work. Through Franckenberg, he was introduced to the works of the late mystic writer Bohme, which left a lasting impression on his mind.
In September of 1647, Scheffler moved to Italy and continued his studies in medicine at the ‘University of Padua’. He completed his doctorate in philosophy and medicine and was awarded a degree, a year later, after which he embarked on the return journey to Silesia. 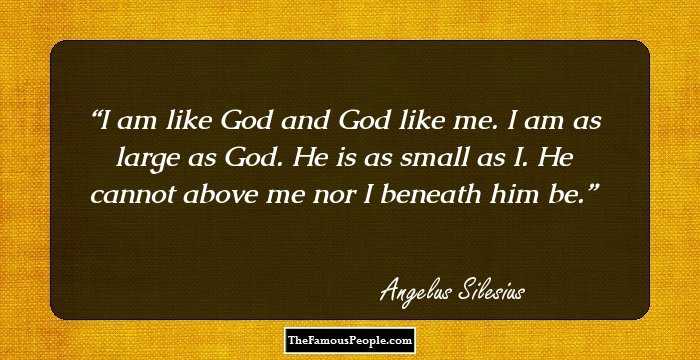 The Hottest Male Celebrities With The Best Abs
Career
In November 1649, he was inducted as the court physician in the Royal Court of Duke of Wurttemberg-Oels, Silvius I Nimrod. Scheffler, whose mystical ideologies were in contradiction to the Lutheran theology, soon became dissatisfied with his job.
The difference in opinions between Scheffler and the members of court increased to such an extent, that he was brandished as a heretic and was supposedly forced to resign from his post, after the death of Franckenberg, in 1652.
He went to the Habsburg rulers, who were making efforts to promote re-Catholicisation in Europe, and adopted Catholicism on 12th June 1653. His re-conversion was conducted by the Saint Matthias Church, located in Breslau and he was rechristened to Angelus Silesius, a name he is famously known as, for his poetical works.
In 1654, he was appointed as the honorary royal physician to the Roman emperor Ferdinand III, in Vienna. However, many believe this was only a façade to deter Lutheran attackers as Silesius was never found in the servitude of the monarch.
His initial attempts to publish poetry were deterred, as the Duke’s court in Wurttemberg denied him permission. However, in 1657, the Catholic Church granted him the permission. He published anthologies of his poetic works, titled 'Heilige Seelenlust' (The Soul's Holy Desire) and 'Der Cherubinische Wandersmann' (The Cherubinic Pilgrim), in the same year.
He was consecrated as a Franciscan priest in 1661 for the Duchy of Neisse and was later instated as a chamberlain, when Sebastian von Rostock became the Prince-Bishop of Breslau.
In 1663, he began compiling his tracts against the reformation movement. The tracts revved up quite a controversy among the Catholics and Protestants. Thirty-nine of his literary essays were compiled in two-volumes, titled ‘Ecclesiologia’ 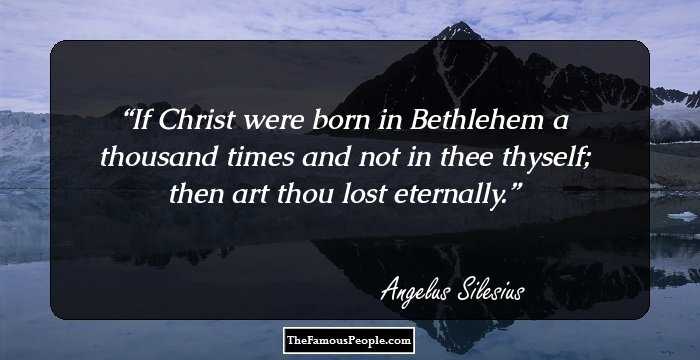 Quotes: Art
Major Works
Silesius shot to fame when his compilation of poems 'Heilige Seelenlust' (The Soul's Holy Desire) and 'Der Cherubinische Wandersmann' (The Cherubinic Pilgrim) were published in 1657. Many of his poems from the anthologies have been converted to hymns.
Personal Life & Legacy:
Silesius spent his last days in a hospice managed by the Saint Matthias Church. He died from a bout of tuberculosis and was buried at the ‘Hospice of Knights of the Cross with the Red Star’, located at Breslau. The wealth he had amassed during his lifetime, mostly from his inheritance of the noble estate, which was handed down to him, was distributed among charitable trusts and orphanages. 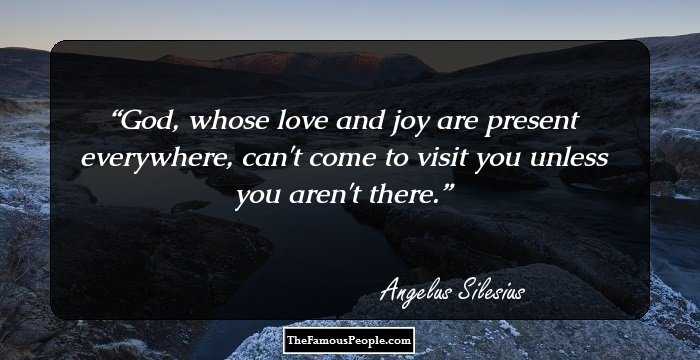 Quotes By Angelus Silesius | Quote Of The Day | Top 100 Quotes

See the events in life of Angelus Silesius in Chronological Order