Alfred Marshall was an English economist counted among the greatest economists of all time. He authored the very famous book ‘Principles of Economics’ which was the most prescribed textbook in economics in England for many years. Even though his works covered a wide range of fields in economics, his specialty was microeconomics. He was the one who emphasized on the concept of price elasticity of demand, a very important concept in the study of demand and supply of goods. One of the dominant economists of the early 20th century, it is remarkable that many concepts of the Marshallian framework are still considered relevant in the 21st century in spite of the tremendous progress economic science has made over the century. Even as a young boy Marshall displayed a keen interest in mathematics which intensified with age. Throughout college he was a brilliant mathematician whose interests eventually turned to philosophy and ethics after experiencing a mental crisis. He first turned to economics as he believed it was a means of improving materialistic conditions and dedicated his life to the development of economics as a scientific field. At the same time he wanted the knowledge of economics to be accessible to the layman and thus wrote books in a style that the layman could easily understand. British Celebrities
British Men
Cambridge University
British Economists
British Intellectuals & Academics
Childhood & Early Life
He was born on July 26, 1842, in Cambridge, England, to William Marshall, an employee in the Bank of England, and Rebecca Oliver. His was a middle-class and he had a comfortable childhood. His father was a very strict person.
He went to the Merchant Taylors’ School before moving on to St. John’s College, Cambridge, rebelling against his father who expected Alfred to go to Oxford with a classics scholarship.
He was a bright student having a deep interest in mathematics and science. However he experienced a mental crisis while at college and switched to philosophy.
His interest in metaphysics led him to ethics which in turn motivated him to study economics. His initial interest in economics stemmed from the fact that economics was crucial for the improvement of the working class. His ethical stance guided him in his work on economics. 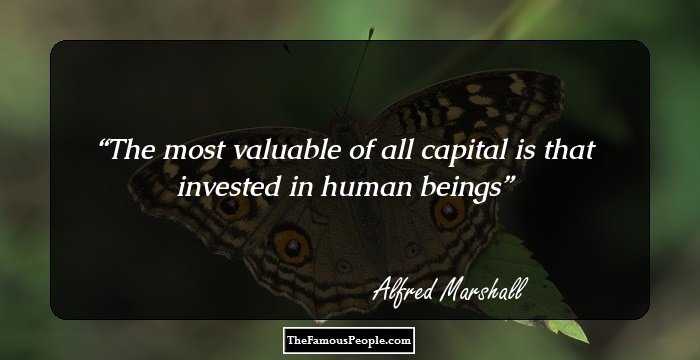 Famous Beautiful Women With Green Eyes
Career
In 1868, he was made a lecturer in the moral sciences at St. John’s College at Cambridge. A few years later, in 1875, he attended a study of trade protection in the United States and on his return strived to make political economy a serious subject at Cambridge.
His efforts bore fruit and in 1885 he became the professor of political economy at Cambridge. Over the next several years he became one of the most prominent economists in the country and retired from Cambridge in 1908.
Over the course of his tenure at Cambridge, he collaborated with several other eminent thinkers like Henry Sidgwick, Benjamin Jowett, John Neville Keynes and John Maynard Keynes, and founded the “Cambridge School”.
He had started working on the ‘Principles of Economics’ in 1881 and spent the next ten years writing it. The book was finally published in 1890 and became the standard textbook for generations of economics students.
The ‘Principles of Economics’ established his reputation as a brilliant economist. It appeared in eight editions and revolutionized the way economics was taught to students in English-speaking countries. Many concepts in the book were the result of Marshall’s original ideas.
Marshall was a prolific writer whose other works include ‘The Economics of Industry’ (1879), ’Elements of Economics of Industry’ (1892) and ‘Industry and Trade’ (1919), ‘Money, Credit & Commerce’ (1923).
In addition to teaching and writing he also created the British Economics Association in 1890 which came to be known as the Royal Economics Society after 1902. He had a great influence on the government policy on prices, gold and silver, currency, and international trade.
An influential economist, he played a major role in shaping the mainstream economic thought over the period of his long and productive career. He is considered to be among the founders of the school of neoclassical economics.
He is credited with the development of the demand-supply graph and for popularizing the use of diagrams in teaching economics. He also played an important role in the “marginalist revolution”. 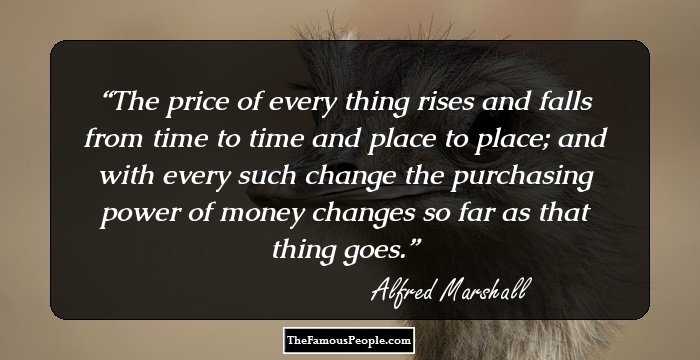 Major Works
He is best known for writing the ‘Principles of Economics’ which went on to become the seminal textbook for generations of economics students. He was the first person to develop the standard demand and supply graph and introduce several new economic concepts. This book established him as one of the leading economists of his era.
Personal Life & Legacy
He began a relationship with Mary Paley, one of his former students and one of the first women to be educated at the Cambridge, and married her in 1877. His wife collaborated with him to write some of his books.
He began to suffer from ill health during his later years though he remained dedicated to his profession till the very end. He died on 13 July 1924 at the age of 81.
The Marshall Library of Economics and The Marshall Society are named in his honor. 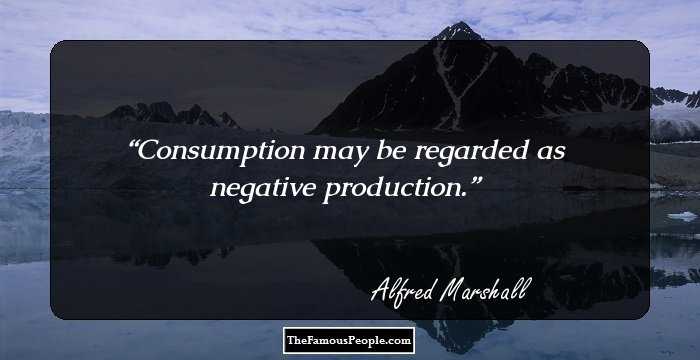 Quotes By Alfred Marshall | Quote Of The Day | Top 100 Quotes

See the events in life of Alfred Marshall in Chronological Order