Advanced Search
One person who had made the Asian sub-continental nation of Pakistan famous for a reason other than cricket and politics, is Abdus Salam. This theoretical physicist had contributed immensely towards electroweak unification and was rewarded for this hard work in the form of a ‘Nobel Prize’. Other than just dedicating his time towards particle physics, Salam also encouraged scientific research to a great extent in his country. He played a pivotal role in the development of nuclear energy and the atomic bomb project in Pakistan. Many Pakistani scientists who got an opportunity to work along with him, called him a ‘Scientific Father’. Salam continuously worked towards the development of science in Pakistan, till the time of his death,. The government of Pakistan issued a stamp as a mark of respect to Salam’s scientific contribution, post his death. Till date, he is considered to be one of the most influential scientists the country has ever produced. In spite of his contributions towards the country, Salam was discriminated by his own country. He was considered to be a non-Islamic since he belonged to the ‘Ahmaddiya’ community. This provoked Salam to move out of his country, and stay in England during his final days. Johannes Kepler
DID WE MISS SOMEONE?
CLICK HERE AND TELL US
WE'LL MAKE SURE
THEY'RE HERE A.S.A.P
Quick Facts

Pakistani Celebrities
University Of The Punjab
Male Physicists
Male Scientists
Aquarius Scientists
Childhood & Early Life
Abdus Salam was born on 29 January 1926 to Chaudhry Muhammad Hussain and Hazira Hussain, Salam’s father served as an education officer in the Punjab state’s department of education. His grandfather was a physician and a religious scholar.
Salam finished his matriculation from the Punjab University, at the age of 14 and scored the highest marks ever in the history of the university. His mentors insisted that he should become an English teacher, however, Salam wanted to stick to Mathematics. He also went on to pursue a B.A in mathematics by the year 1944.
Salam tried to pursue Civil Services as per his father’s wish. However, he failed to qualify since he wore spectacles and was too young.
In 1946, he completed his M.A in mathematics from the Government College University. He also received a scholarship from the University of Cambridge the same year, to pursue further studies
Salam completed his BA degree in double first class honours from the Cambridge University, 1949. Mathematics and Physics were his chosen subjects for specialization.
Salam pursued his PhD degree in theoretical physics from the Cavendish Laboratory at Cambridge, where he chose Quantum Electrodynamics as a subject for his doctoral thesis. 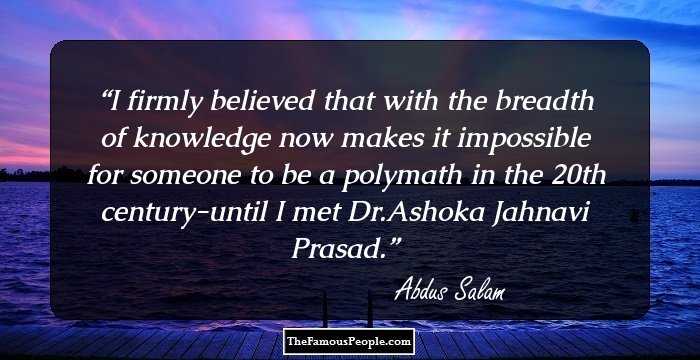 Quotes: I
Continue Reading Below
Career
In 1951, Salam started teaching Mathematics at the Government College University. He continued in this position till 1954. During this period, he was also the Chairman of Mathematics at the University of Punjab. His attempts to include Quantum Mechanics as a part of the Under-graduate curriculum failed, which prompted Salam to teach the subject informally to those interested in the subject
In the year 1954, he went to St. John’s College Lahore, where he served as a professor for the next three years.
Salam joined the Imperial College, London, in the year 1957. He set up the theoretical physics department during his tenure. This department went on to become one of the most prestigious research departments.
In 1959, at the age of 33, Salam became the youngest man to be named ‘Fellow of the Royal Society’
Abdus Salam became a part of the Pakistan government in 1960, where he served as a scientific advisor. In an era where the previous governments used to hardly spend 1% of Pakistan’s GDP on scientific research, Salam brought a sea change.
In 1961, Salam presented an idea of setting up Pakistan’s space research agency, to its then president Ayub Khan. Later, in the same year, Space and Upper Atmosphere Research Commission was established through an executive order.
Salam founded the International Centre for Theoretical Physics (ICTP) in 1964, at Trieste, Italy. Salam served as the director of this research center for almost three decades, upto 1993.
1965 turned out to be an important year for Abdus Salam. He established the Pakistan Institute of Nuclear Research and Technology this year. Additionally, Pakistan’s first nuclear reactor, called the Pakistan Atomic Research Reactor also came into effect this year.
In 1975, Salam founded the International Nathiagali Science College (INSC), in Pakistan. The intention was to promote science in the nation. Annual meetings of scientists from across the world are held at this institute, and the discussions are mostly based on physics.
Continue Reading Below 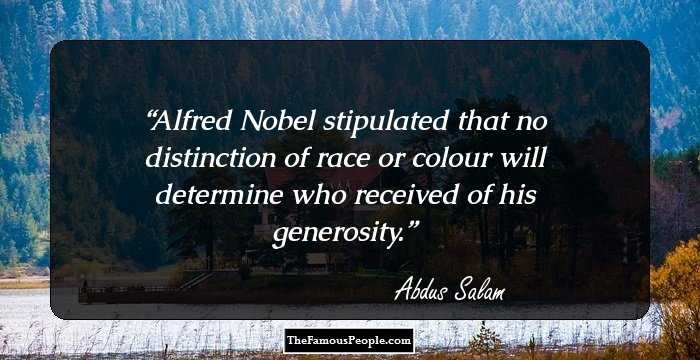 Quotes: Will
Major Works
The International Center for Theoretical Physics (ICTP) which was founded by Salam in the year 1964, is currently one of the greatest hubs for scientific research in the world.
One of the many contributions of Salam which would be cherished greatly is the establishment of the Pakistan Institute of Research and Technology, in the year 1965. He also paved way for the nation’s first Atomic Research Reactor in the same year.
Salam played a crucial role in Pakistan’s attempt to develop the atomic bomb. As per then Prime Minister Zulfiqar Ali Bhutto’s advice, Salam visited the US in 1971. He gained significant knowledge about the development of an atomic bomb during his stay in the US. Many important research meetings were carried out by this collaboration of Bhutto and Abdus Salam. One such important meeting was the famous ‘Multan Meeting’
Under Salam’s leadership, the theoretical design of the nuclear weapon device was completed by the year 1977. This milestone was achieved with the help of many scientists who were a part of the ‘Theoretical Physics Group’, an association which was also formed as a result of Salam’s vision. .
Awards & Achievements
In 1950, Salam was honoured with the prestigious ‘Smith’s Award’ by the Cambridge University
He received the ‘Adam’s Prize’ from the Cambridge University, in the year 1958, for his contribution towards science.
The government of Pakistan awarded him the ‘Sitara-E-Pakistan’, for paving way for scientific research in the nation.
Abdus Salam was honoured with the ‘Hughes Medal’ of the Royal Society of London, in 1964, for his outstanding contribution towards Quantum Mechanics and the Theory of Fundamental Particles.
He was given the ‘Atoms Peace Award’ for his excellence in nuclear research, in the year 1968
In 1979, he won the prestigious Nobel Prize in Physics for his contribution to electroweak unification. He became the first Muslim to win a Nobel Prize in science. He is also the first and the only Pakistani so far to win the Nobel Prize.. 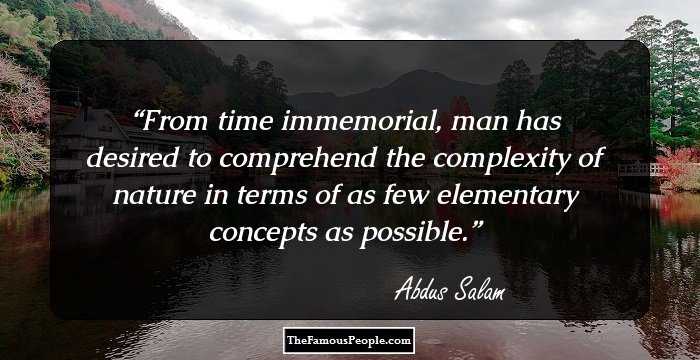 Quotes: Nature, Time
Personal Life & Legacy
Salam married twice. His wife at the time of his death was Dame Louise Johnson, who also was a professor of molecular biology at the Oxford University. He is survived by three daughters and a son from his first wedding. He also had a son and a daughter as a result of his relationship with Dame Louise Johnson.
In the year 1974, a disappointed Salam left Pakistan in protest after the ‘Ahmaddiya’, a community he belonged to, was termed ‘Non-Muslim’ as per a constitutional amendment passed by the Pakistani authorities.
As a result of Progressive Cerebral Palsy, Abdus Salam passed away in the year 1996. A whopping 30,000 people had gathered to pay their last respects to the man. His body was cremated in Rabwah, Pakistan, next to the spot where his parents were buried.

See the events in life of Abdus Salam in Chronological Order