Advanced Search
Abdullah Ahmad Badawi is a former Prime Minister of Malaysia; he served as Prime Minister from 2003 to 2009. Selected as the Deputy Prime Minister in 1999 following the dismissal of Anwar Ibrahim, Abdullah succeeded Mahathir Mohamad as Prime Minister in 2003. He was also the President of the United Malays National Organisation (UMNO), the largest political party in Malaysia. Born into a prominent religious family with political inclinations, he served on the National Operation Council, which exercised executive power during a nationwide state of emergency in 1969-70. He eventually moved to the Ministry of Culture, Youth, and Sports before becoming a member of parliament for his constituency of Kepala Batas in 1978. He held several prominent positions under Prime Minister Mahathir Mohamad, including that of minister of foreign affairs. Abdullah became the Prime Minister in 2003 and proved to be quite popular in this position. Fondly known as Pak Lah, or Uncle Abdullah he received much love and respect from his citizens for his efforts to bring about positive reforms to the nation. Upon leaving the office in 2009, he was conferred the title 'Tun' by King Mizan Zainal Abidin for his service to the nation. Lim Guan Eng
DID WE MISS SOMEONE?
CLICK HERE AND TELL US
WE'LL MAKE SURE
THEY'RE HERE A.S.A.P
Quick Facts 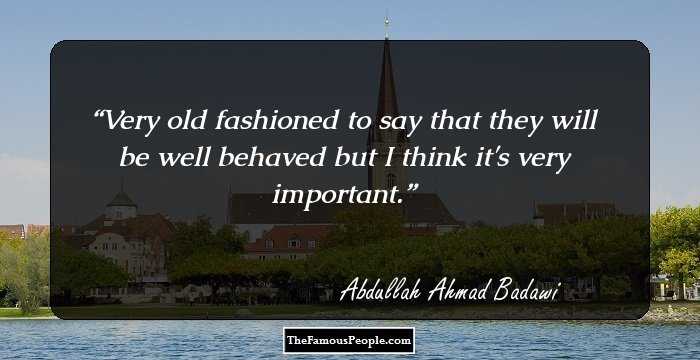 Quotes: Think
Continue Reading Below
Career
After completing his studies, Abdullah Ahmad Badawi joined the Malaysian Administrative and Diplomatic Corps (the formal term for the civil service) where he served as the Director of Youth at the Ministry of Youth and Sport as well as secretary of the National Operations Council (MAGERAN).
During a nationwide state of emergency in 1969-70, he served on the National Operation Council, which exercised executive power during this crucial time. By 1971 he had joined the Ministry of Culture, Youth, and Sports.
His political ambitions were on a rise and he resigned from the civil service in 1978 to enter active politics. The same year he was appointed to the Federal Territory Ministry, his first administrative position. Also in 1978, he became a member of parliament for his constituency of Kepala Batas in northern Seberang Perai.
In 1988, the then Prime Minister Mahathir Mohamad elected Badawi as the Vice President of the newly established United Malays National Organisation (UMNO.)
In 1990, he retained his position as the Vice President, after which he was appointed to the position of Foreign Minister in the Cabinet, a position he held until 1999.
He lost the office of the Vice President in 1993, but remained in the Cabinet as the Minister of Foreign Affairs. Over the ensuing years he also held various other posts at the prime minister’s office such as Minister of Education and Minister of Defence.
On completion of his probation and dismissal of Anwar Ibrahim, Badawi was elected as Deputy Prime Minister of Malaysia (1999-2003) and Minister of Home Affairs. Simultaneously, he also held the position of the President of the United Malays National Organisation (UMNO).
In 2003 Prime Minister Mahathir stepped down, and Abdullah, his chosen successor, took over his position. Abdullah Ahmad Badawi assumed office as the Prime Minister of Malaysia on 31 October 2003.
During his tenure as the Prime Minister, Badawi resolved to bring down corruption. He even prophesized an interpretation of Islam, known as Islam Hadhari, according to which he advocated inter-compatibility between Islam and the economic and technological development.
Continue Reading Below
Badawi also focused on internal security against corrupt practices. Additionally, he gave a lot of importance to foreign policy making. For his work, Badawi was popularly referred to as “Pak Lah” (Malay diminutive for Uncle Abdullah) by the people of the country.
He kept the crucial finance portfolio with him under which he released his maiden budget in 2004 that was mostly maintenance oriented, a sharp contrast from growth policies emphasized by Mahathir, his predecessor.
Deeply involved in foreign policy making, Abdullah Badawi served as the chairman of the Organisation of the Islamic Conference since the start of his premiership in 2003. He was also the chairman of the ASEAN. In addition to these posts, he had served as chairman of the Non-Aligned Movement from October 2003 to September 2006 as well.
It was under Badawi’s administration that Malaysia and Japan signed the free trade agreement, under which the two countries were able to scrap tariffs essentially on all industrial goods and most agricultural, forestry and fishery products.
In March 2008, Abdullah Ahmad Badawi won a second term as prime minister by winning the 12th General Election. However this time he could garner only a reduced majority. He was sworn in for a second term as prime minister on 10 March 2008.
His second term, however, was not a popular one. Due to political hostility from both opposition and his own party members, he stepped down as UMNO President and prime minister in 2009. 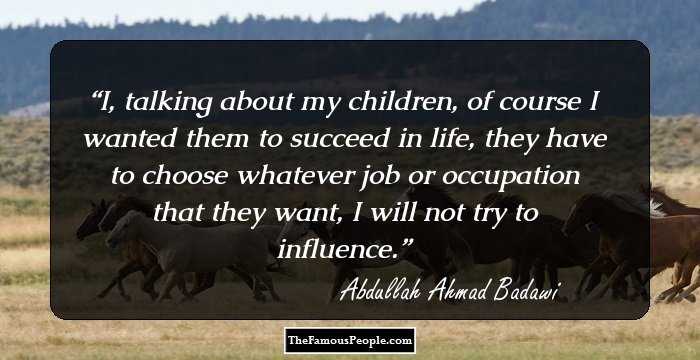 Quotes: Will
Major Works
A strong supporter of the belief that wealth is created by foreign investment, government contracts, and privatization, Abdullah Ahmad Badawi had been heavily involved in foreign policy making and value chain development during his tenure as the prime minister. It was under his premiership that Malaysia entered into a historic free trade agreement with Japan that enabled both countries to commence on mutually profitable foreign trade.
Awards & Achievements
Abdullah Ahmad Badawi was honored with the Darjah Johan Negeri in 1979 and the Darjah Yang Mulia Pangkuan Negeri in 1981.
He is also the recipient of several international honors including Grand Cordan of the Order of the Sacred Treasure (Japan, 1991), Grand Cross of the Order of Merit (Chile, 1994), and First Class of the Most Exalted Order of the White Elephant (Thailand, 1994).
In 2009, he was made an Honorary Grand Commander of the Order of the Defender of the Realm. 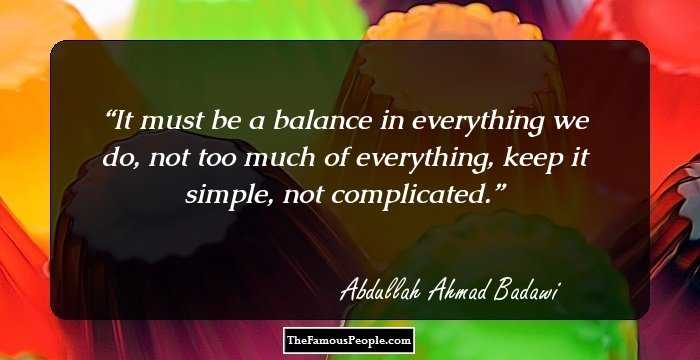 Personal Life & Legacy
Abdullah Ahamad Badawi married Endon Mahmood in the year 1965. Mahmood died of breast cancer in the year 2005.
Two years later, Badawi tied the knot again with Jeanne Abdullah. This was a second marriage for both; Jeanne had previously been married to the younger brother of Badawi's first wife. He has two step-children from his second marriage.