(One of the Greatest Basketball Players Who Played as a Center)

Advanced Search
Wilt Chamberlain was an American basketball player. Considered one of the greatest players in history, he holds many ‘NBA’ records in several categories, such as durability, scoring, and rebounding. With a staggering height of 7'1", Wilt became a towering figure in basketball, during and after his time. In a career spanning 14 years, he played exceptionally well. He was also instrumental in bringing the essential changes to the sport. He is also remembered for not committing any fouls throughout a regular season or playoff games, which again is a record. Off the court, he experimented with other games, while writing his autobiography. According to his attorney Sy Goldberg, “he happened to make a living playing basketball but he was more than that. He could talk on any subject. He was a Goliath.” Hence, when he retired from basketball, he turned his attention towards other businesses and ventures, unlike many of his contemporaries. He played volleyball, promoted track and field athletes (especially women), appeared in commercials, and also acted in a film! However, he was never keen about getting into a relationship or having a family. He had several affairs and lived alone till his death. American Celebrities
Black Basketball Players
American Men
University Of Kansas
Tall Celebrities
Childhood & Early Life
Wilt was born Wilton Norman Chamberlain on August 21, 1936, in Philadelphia, Pennsylvania, USA, to William Chamberlain, a welder, and Olivia Ruth Johnson, a homemaker. As a child, he was never fond of basketball and was more of a track and field athlete.
However, as he grew up he developed a liking for basketball as the sport was popular in Philadelphia. He attended ‘Overbrook High School’ where he played basketball. Since he was already more than 6 feet by then, his height gave him an advantage over others while playing basketball.
His college basketball debut came in the year 1957. He led his team ‘Jayhawks’ to the ‘NCAA’ finals the next year.
In 1958, he quit college to play professional basketball. However, he was not allowed to do so as he had to complete his college to be qualified to play in the ‘NBA.’ So, he played for ‘Harlem Globetrotters’ who signed him up for $50,000. 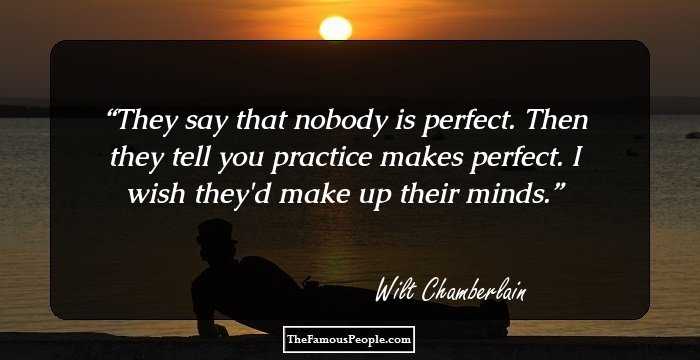 Quotes: You, I
Continue Reading Below
Career
He made his debut as a ‘NBA’ player on October 24, 1959, playing for ‘Philadelphia Warriors’ in a game against the ‘Knicks.’ In the game, he scored an impressive 43 points and made 28 rebounds.
The 1962 season was historic because he became the first person in ‘NBA’ to score 100 points in a game. By the end of the season, he had an average of 50.4 points per game.
He continued playing for the ‘Warriors’ in San Francisco, scoring an average of 37 points per game throughout the 1963-64 season.
In 1965, he returned to his hometown and joined the ‘Philadelphia 76ers’ (Sixers), where he played against their arch rival, the ‘Boston Celtics.’
After being defeated in the previous season, the ‘Sixers’ made a comeback in the 1967 ‘NBA Playoffs,’ in which they won 4 out of 5 games. Chamberlain’s personal score was excellent, and he played a key role in helping his team win.
In the 1967 ‘NBA Finals,’ ‘Sixers’ played against ‘San Francisco Warriors’ (originally Philadelphia Warriors). Once again Chamberlain helped his team win.
He was traded to the ‘Los Angeles Lakers’ in 1968 for a sum of $250,000, after tax deduction.
During the 1969 ‘NBA Playoffs,’ he assisted his team to a win against the ‘San Francisco Warriors’ in a six-game tournament in which ‘Lakers’ won four games. However, the team lost to their old and familiar rival, ‘Boston Celtics.’
He captained the ‘Lakers’ in the 1972 ‘NBA Finals’ and led them to victory over ‘New York Knicks’ in five games straight.
Continue Reading Below
The 1972–73 ‘NBA’ season was Chamberlain’s last season as a player. Despite Chamberlain’s individual score of 23 points and 21 rebounds, his team lost miserably to the ‘Knicks’ in the finals.
In 1973, he was signed as a player-coach by ‘San Diego Conquistadors,’ an ‘ABA’ (American Baseball Association which later merged with NBA) team. However, he was sued by the ‘Lakers’ as his contract with them was existent which meant he could not play for another team. Shortly after, he retired from professional basketball.
After his retirement from the game, he tried his hand at several other things; he made money in stocks and real estate, opened a night club, and appeared in several commercials. He also funded professional volleyball and track and field teams.
His new found interest was volleyball, and he was exceptional at it. Soon, he became one of the board members of ‘International Volleyball Association’ in 1974.
After serving as the president of ‘International Volleyball Association,’ he tried his hand at acting in 1976. He also executive produced a film titled ‘Go For It.’
In 1984, he was cast alongside actor Arnold Schwarzenegger in the film ‘Conan the Destroyer.’ 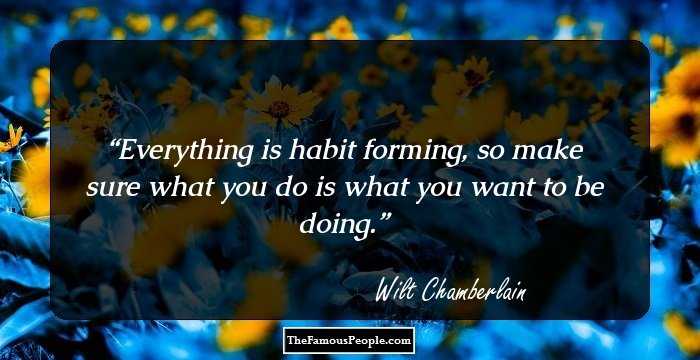 Quotes: You
Awards & Achievements
He is the only player in ‘NBA’ to have an average of 30 points and 20 rebounds throughout a season. He is also the first player to score 100 points in a single game.
Thanks to his achievements, he was inducted into the ‘Naismith Memorial Basketball Hall of Fame’ in 1978.
In 1996, he was named one of the ‘50 Greatest Players in NBA History.’
In his entire career, Wilt has won two ‘NBA Championships,’ and has been named ‘MVP’ four times for his achievement in regular seasons. He was also named ‘MVP’ for his achievement in one of the ‘NBA Finals.’
Personal Life & Legacy
This basketball player never married. It was believed that he had multiple affairs with women. He died of heart congestion on October 12, 1999, at the age of 63.
He co-wrote and published his autobiography ‘Wilt: Just Like Any Other 7-Foot Black Millionaire Who Lives Next Door’ in 1973.
In 1991, he came up with another autobiography titled ‘A View from Above,’ in which he gave an insight into his private life. 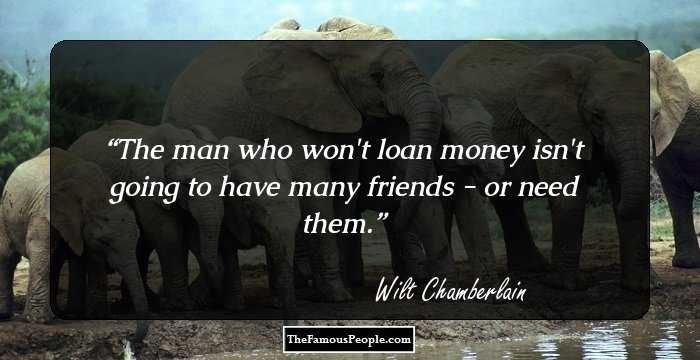 Quotes: Money, Friends, Need
Trivia
This legendary ‘NBA’ player also played volleyball after his retirement from basketball. He also promoted volleyball, for which he was inducted into the ‘Volleyball Hall of Fame!’

See the events in life of Wilt Chamberlain in Chronological Order