Stephen Curry is an American professional basketball player who represents the ‘Golden State Warriors’ in ‘NBA.’ The first child of Dell Curry, who is considered one of the best 3-point shooters in ‘NBA’ history, Stephen has been named the greatest shooter by many players as well as analysts. He has won the 'NBA Most Valuable Player Award' twice in a row, including one unanimous win, a first in ‘NBA’ history. He led the ‘Warriors’ to their first championship in four decades, and also helped his team break the record for the most wins in an ‘NBA’ season. He earned the ‘Southern Conference Player of the Year’ title twice by setting an all-time scoring record for both ‘Davidson’ and the ‘Southern Conference.’ He also set the ‘NCAA’ record for most three-pointers made in a season during his second year in college. Renowned for his shooting skills, he holds the ‘NBA’ record for most three-pointers made in a regular season, a record that he himself broke twice. He and his teammate, Klay Thompson, are known by the nickname ‘Splash Brothers’ for their record-breaking combined three-pointers in a season. Ayesha Curry
DID WE MISS SOMEONE?
CLICK HERE AND TELL US
WE'LL MAKE SURE
THEY'RE HERE A.S.A.P
Quick Facts

Wardell Stephen Curry II was born on March 14, 1988, in Akron, Ohio, to former ‘NBA’ player Dell Curry and his wife Sonya who played volleyball at ‘Virginia Tech.’ He is the oldest child of his parents and has a brother named Seth, a professional basketball player signed to ‘Dallas Mavericks.’ He also has a sister named Sydel, who plays volleyball at ‘Elon University.’

His father played for the ‘Cleveland Cavaliers’ at the time of Stephen’s birth, but later became a member of the ‘Charlotte Hornets’ in Charlotte, North Carolina where Stephen spent most of his childhood. His father used to take both him and his brother to his practice sessions.

The family briefly stayed in Toronto after his father became a member of the ‘Toronto Raptors’ team. During this time, Stephen led the ‘Queensway Christian College’ boys' basketball team to an undefeated season. After the family moved back to Charlotte, he enrolled at ‘Charlotte Christian High School.’ Due to his frail stature, he was overlooked by most coaches who avoided recruiting him.

Though he wanted to join ‘Virginia Tech,’ where his father spent his college years, he was rejected by Coach Seth Greenberg. Curry finally enrolled at ‘Davidson College’ in November 2005, after being convinced by a coach named Bob McKillop, who first realized his potential when he watched him play at the age of ten. 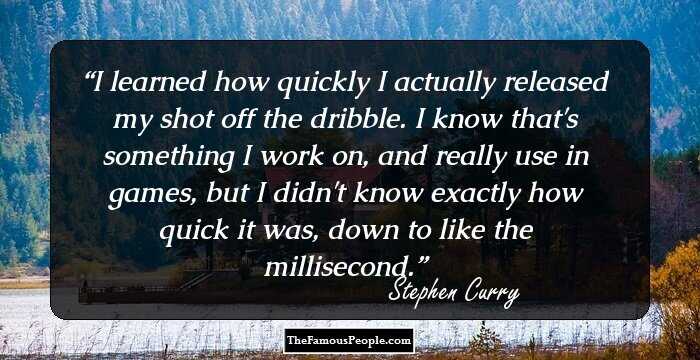 After joining ‘Davidson College,’ Stephen Curry played his first collegiate game against ‘Eastern Michigan.’ While he could only score 15 points in the game, committing 13 turnovers, he showed his mettle in the next game against ‘Michigan,’ scoring 32 points. He became the second scorer in the nation to have an average of 21.5 points per game and earned the title ‘Southern Conference Freshman of the Year’ that season.

He followed up his record-breaking 122 three-pointers as a freshman in the first season with an even more impressive performance in the 2007-08 season. He led ‘Davidson Wildcats’ to their first ‘NCAA Tournament’ since 1969, and helped his team continue its winning streak for 22 games.
During his junior year, he became Davidson's all-time leading scorer with 34 points. He also scored a career-high 44 points against ‘Oklahoma’ on November 18, 2008. He surpassed the previous scoring leader, John Gerdy, in total points and became the ‘NCAA’ scoring leader that season. 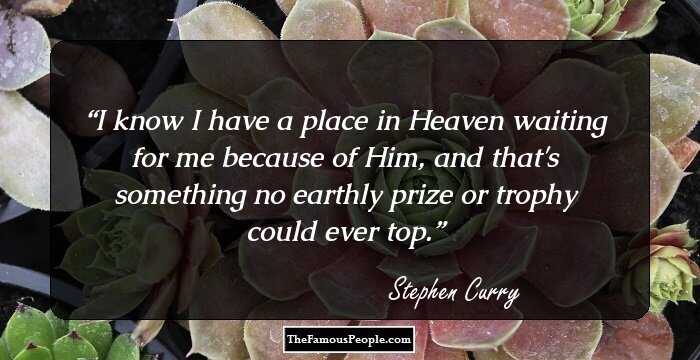 Professional Career
Stephen Curry left ‘Davidson College’ without completing his senior year to play in the ‘NBA.’ He was chosen by the ‘Golden State Warriors’ as the seventh overall pick in the 2009 ‘NBA’ draft.
Showcasing his shooting skill right from the beginning, he scored a record 166 three-pointers as a rookie in the league history. However, repeated injuries and the fact that he played for a weak team kept him out of the limelight during the next two seasons.
During the 2012-13 season, he recovered fully from his ankle sprain. Subsequently, he and his teammate Klay Thompson earned the nickname ‘The Splash Brothers’ for their record combined three-pointers in a season. During the season, Stephen alone scored 272 three-pointers to set an ‘NBA’ record.

During the next season, he made his first ‘All-Star’ appearance in February 2014, for the ‘West’ and was later selected to his first ‘All-NBA Team.’ He also became the leading three-pointer scorer for the ‘Warriors,’ surpassing Jason Richardson.

During the 2014-15 season, he broke his own league record for maximum three-pointers made in a season by achieving 286 three-pointers. In 2015, he helped the ‘Warriors’ win their first championship since 1975, and was named the ‘Most Valuable Player’ of the year by ‘NBA.’

Continue Reading Below
In the next season, he helped his team win 24 consecutive matches, which culminated in 73 total wins, an all-time ‘NBA’ record. Despite suffering an injury, Curry led the ‘Warriors’ to their second straight ‘NBA Finals,’ but even his record of 27 three-pointers in a final match failed to save the game for the team.
He continued to break a number of records during the 2015-16 season, including his own record to take the new maximum three-pointers tally to 402. He also became the first player in ‘NBA’ history to be selected as the ‘Most Valuable Player’ unanimously.
Curry broke numerous three-point ‘NBA’ records in the 2016–17 season and surpassed 300 three-pointers for the second time in ‘NBA’ history, finishing with 324 three-pointers. His team clinched a playoff berth by February 25, 2017, becoming the fastest team to do so in ‘NBA’ history.
Stephen made his debut with the United States National Basketball team at the 2007 ‘FIBA Under-19 World Championship,’ where he helped the team clinch a silver medal. Later, he helped his team win a Gold medal as part of the senior squad in 2010. His team remained undefeated in 2014 ‘FIBA Basketball World’ Cup as well.
Curry led the ‘Golden State Warriors’ onto their third championship in four seasons in the 2018 ‘NBA’ finals.
Achievements
Stephen Curry is renowned for his shooting accuracy and for leading the league for the most number of three-pointers during three seasons. He set the record with 272 three-pointers during the 2012–13 season and then surpassed his own record in 2015 and 2016 with 286 and 402 three-pointers respectively.
Stephen Curry became the first player in ‘NBA’ history to be named the ‘Most Valuable Player’ by unanimous vote in May 2016. With this achievement, he also made it to the list of players who have won the title for two consecutive years.
Stephen was ranked 3 by ‘Sports Illustrated’ behind Lurant and LeBron James in the list of ‘Top 100 NBA Players of 2019.’ 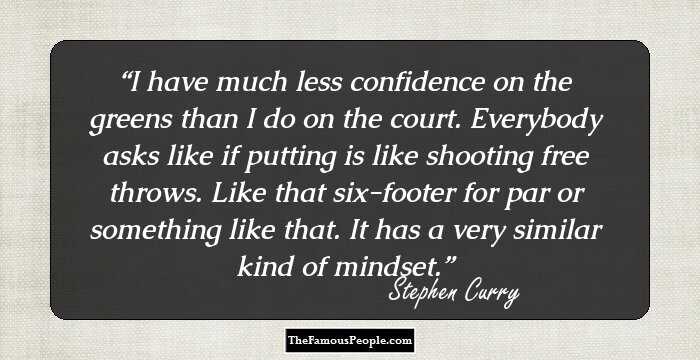 Stephen Curry married his college sweetheart, Ayesha Alexander, on July 30, 2011, in Charlotte. They first met in a church youth group when they were teenagers. They live in Alamo, California, with their two daughters, Riley Elizabeth Curry and Ryan Carson Curry, and son Canon W. Jack Curry.

He is a devout Christian and often expresses his faith in God during his matches as well as his speeches. He also has a tattoo of First Corinthians, 13:8 in Hebrew on his wrist.

Curry became aware of the epidemic of malaria from ‘Davidson’ teammate Bryant Barr during his school days. For three years since 2012, he decided to donate three insecticide-treated mosquito nets for every 3-pointer he made to the United Nations Foundation's 'Nothing But Nets' campaign. In 2015, he met President Barack Obama at the Oval Office and delivered a five-minute speech in support of the ‘President’s Malaria Initiative.’

Stephen, along with his friends Jeron Smith and Erick Peyton, formed ‘Unanimous Media,’ a production company back in 2016. ‘Sony Pictures Entertainment’ became their distribution partner. The company was named after Curry’s achievement of becoming the unanimous MVP in the history of ‘NBA.’
Trivia
Stephen Curry might be a star on the basketball court, but his mother still keeps him under discipline. She penalizes him with $100 for every turnover he commits after his third turnover in each game.

Quotes By Stephen Curry | Quote Of The Day | Top 100 Quotes

See the events in life of Stephen Curry in Chronological Order