Advanced Search
Larry Joe Bird is an American former iconic basketball player who played for NBA’s ‘Boston Celtics’. He is a legend in the NBA scene as he holds many records and brilliant career stats. No wonder he is also addressed as ‘Larry Legend’. With an extensive list of achievements, Larry is one of the most popular NBA players of all time. He has won three NBA tournaments and has been awarded the Most Valuable Player on five occasions. With 12 NBA All-Star honors and nine All-NBA First Team honors, Larry is regarded as the deadliest shooter, the master intimidator and an excellent scorer of all time. He has had a successful post-retirement career as well and has been honored with Best Coach and NBA Executive of the Year awards. While his high self-confidence has helped him to achieve many wonderful things on the court, it has also defamed him to some extent as he is labeled as a big time trash talker. American People
American Men
Tall Celebrities
Tall Male Celebrities
Male Sportspersons
Childhood & Early Life
Larry Bird was born on December 7, 1956 in West Baden Springs, Indiana. He grew up in this village which is nearby to a town named French Lick. When his family disintegrated, Larry’s father, Claude Joseph ‘Joe’ Bird, moved to French Lick in order to find a job. Back in the village, Larry’s mother, Georgia, was struggling to raise him and his five siblings.
His had three brothers - Mike, Mark, Jeff and Eddie, and a sister, Linda. Georgia managed to work at two different places in order to make both ends meet.
Larry was always interested in sports and played various sports. By the time he reached high school, he was concentrating on basketball alone. One day, he finally realized that he can excel in basketball and hence practiced hard in an attempt to fine-tune his skills.
Around this time, his parents were going through a rough time, and they separated. Their divorce affected Larry and he abandoned his family. This provided him with the perfect opportunity to dedicate all his time to basketball.
Larry joined the Springs Valley High School basketball team. He then emerged as a valuable player to the team. With an average of 31 points and 21 rebounds, his skills and determination soon made him the star player. Larry further polished his skills during his college days from where his basketball career commenced. 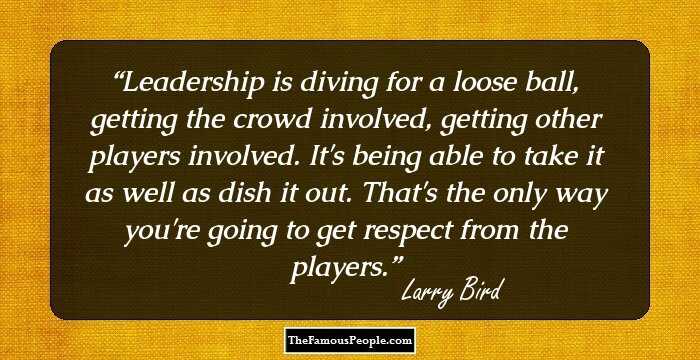 Continue Reading Below
Career
Larry’s remarkable achievements while playing for his school caught the attention of Indiana University which offered him a scholarship and an opportunity to play for their team under the tutelage of the then top mentor Bob Knight.
Larry accepted the offer but couldn’t make the best use of it. He failed to gel with the students there and eventually dropped out of the college. He returned to French Lick and enrolled himself at Indiana State University, situated at Terre Haute. There he played for the team ‘Sycamores’ and contributed a lot towards the team’s incredible success.
Under his leadership, the team made its debut appearance at the NCAA tournament. The tournament played a significant role in shaping Larry’s career. Despite losing the championship, Larry was awarded the player of the year for his incredible performance.
The tournament also introduced Larry to his lifelong professional rival, Earvin "Magic" Johnson.
Larry’s breakthrough came in the year 1978 when he was chosen to play for ‘Boston Celtics’. But Larry declined the offer and decided to play in the final season for Indiana State. He continued playing for ‘Sycamores’ and led the team to qualify for the NCAA title game.
He then got involved in a contract dispute with Arnold Jacob "Red" Auerbach, the then coach of ‘Sycamores’. Larry did not accept the offered amount as he wanted a hike. The dispute finally got resolved and a year later, Larry signed the contract after agreeing upon a negotiated amount of 3.25 million dollars which was the highest figure at that time.
This contract brought about a major change in the NBA selection committee. A new rule called ‘Bird Collegiate Rule’ became mandatory for all the new players thereafter.
Larry led the team to newer heights and was named in the All-Star Team and also won the Rookie of the Year. He contributed to the growth of the team by winning 32 games in total with averages of 21.3 points, 10.4 rebounds, 4.5 assists and 1.7 steals per game.
After a few defeats, the team finally won the championship, beating ‘Houston Rockets’ in the finals. With a score of 19 points, Larry won the All-Star Game MVP Award in 1982 and was the runner-up for the Most Valuable Player Award.
Continue Reading Below
Larry then faced a bit of downfall, but it did not stay for a long period of time. After losing seven games for the Conference Finals, the team finally won five Conference Finals. During the games between 1984 and 1985, Larry scored a record 60 points in a game and was honored with the MVP award for the second consecutive year.
Larry once again encountered a career downfall. In 1987, he could not save his team from losing six back-to-back games against ‘Lakers’ and eventually, the team lost the Eastern Conference Finals.
Despite delivering remarkable statistics, Larry failed to make it to the NBA finals that year. A heel injury kept him from playing for quite a long period of time. Though he made a comeback in 1989, his health once again failed him.
In 1992, Larry played and won a gold medal for the United States basketball team in the Olympics that was hosted by Barcelona, Spain. On August 18, 1992, Larry announced his retirement. 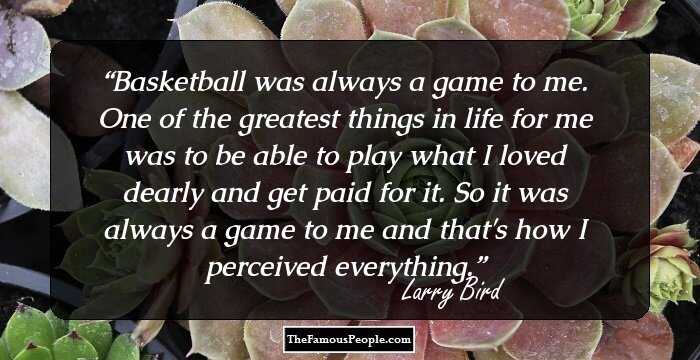 Post Retirement
After a glorious career as an NBA player, Larry had a remarkable post-retirement career too. From 1992 to 1997, he served as a special assistant in the team's front office. After that, he signed a three year contract as the coach for the team ‘Indiana Pacers’.
Under his guidance, the team went on to make a record score of 58-24. He was awarded the NBA Coach of the Year and with that Larry created history in NBA as he became the only coach to have won the MVP award too. Under his tutelage, the team performed exceptionally well by winning back-to-back Central Division titles for 1999 and 2000.
In 2003, he became the president of basketball operations for the team ‘Pacers’. He was then honored with the NBA Executive of the Year. On May 1, 2017, Larry retired from the NBA operation and began to serve as the advisory.
Controversies
Apart from having a wonderful career, Larry has his own share of controversies too. On many occasions he was seen getting involved in a verbal spat on the court with players and coaches of the opposition teams. He has also been blamed for constantly insulting others and for using cuss words on court.
His verbal brawl with the coach of ‘Chicago Bulls’, Doug Collins, during a game made the headlines. In the game, Larry scored 41 points. 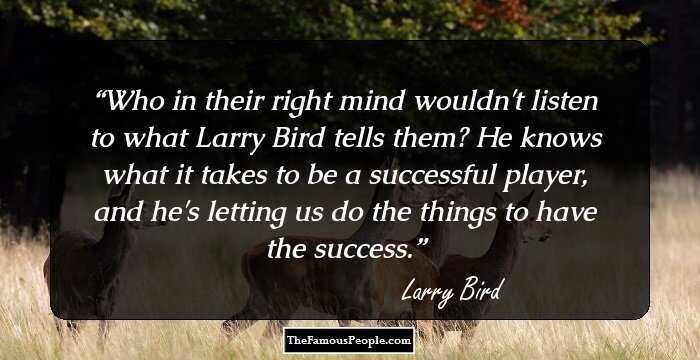 Personal Life
Larry had a troubled childhood. The divorce of his parents affected him to such an extent that he decided to leave his home. He did many odd jobs to support his finances. Larry also worked as a garbage truck driver in French Lick.
He had a short-lived marriage with his high school sweetheart, Janet Condra, with whom he has a daughter named Corrie. A year after the divorce, his father committed suicide. In 1989, Larry married Dinah Mattingly and adopted two kids, Conner and Mariah.

See the events in life of Larry Bird in Chronological Order