Kevin Wayne Durant is a professional American basketball player who currently plays for the ‘Brooklyn Nets of the ‘National Basketball Association.’ Durant has won many awards, including two ‘Finals MVP Awards’ and two Olympic gold medals. Born in Washington DC in the United States, Durant was enthusiastic about basketball from his childhood. During his teenage years, he used to travel around the country for basketball tournaments along with his father. He was also quite active in playing basketball in the schools he studied. After he entered the ‘University of Texas,’ his brilliant skills in the sport earned him the ‘Oscar Robertson’ award and the ‘Adolph F Rupp’ awards, making him the first person to earn both honors as a freshman. Because of his incredible talent, he became eligible for the ‘NBA’ draft after just one year of playing in college. As a professional basketball player, Durant’s biggest achievement came at the 2012 Olympics where he not only set the record for total points scored in an Olympic basketball tournament, but also helped the national team earn a gold medal. He rejoined the team for the 2016 Olympics, where the team earned a gold medal once again. Playing for the ‘Golden State Warriors,’ he won ‘NBA Championship’ two times in a row. American People
American Men
University Of Texas At Austin
Tall Celebrities
Tall Male Celebrities
Childhood & Early Life
Kevin Wayne Durant was born on September 29, 1988, in Washington D.C., USA, to Wanda and Wayne Pratt. While he was still an infant, his father deserted the family, and the boy was raised by his mother and grandmother. He has three siblings, a sister Brianna, and two brothers Tony and Rayvonne.
Kevin grew up to be a very tall boy with a keen interest in sports. Though he was often teased for his height, his grandmother Barbara Davis encouraged him, saying that his height was actually a blessing and would help him in his athletic career. His father got back to Kevin when he was around 13 and they toured the country together for basketball tournaments. 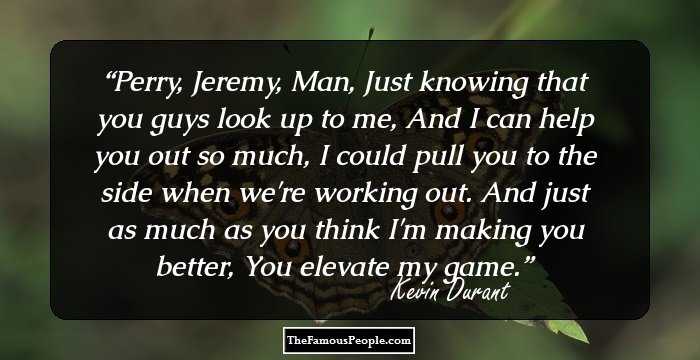 Continue Reading Below
Career
Kevin Wayne Durant began his early career by playing ‘Amateur Athletic Union’ basketball for several teams in the Maryland area. During this time, he was introduced to future ‘NBA’ players, Michael Beasley, Greivis Vásquez, and Ty Lawson.
He studied at the ‘National Christian Academy’ and at the ‘Oak Hill Academy.’ In both schools, he was quite active in basketball. He later transferred to ‘Montrose Christian School’ for his senior year. By this time, he had grown six feet and seven inches tall.
Later, for further education, he joined the ‘University of Texas,’ where during the first year itself, he won the ‘Oscar Robertson’ and the ‘Adolf F Rupp’ awards for his brilliant performance. Because of his exceptional basketball skills, he was considered eligible for the ‘NBA’ draft after just one year of playing at college.
He was selected by the ‘Seattle SuperSonics’ at the 2007 ‘NBA’ draft and began his professional career. He recorded 18 points, five rebounds, and three steals in his first game against the ‘Denver Nuggets.’ The first match-winning shot of his career was made in a match against the ‘Atlanta Hawks,’ which took place on 16 November. His brilliant performance earned him the title ‘NBA Rookie of the Year.’
In the next season, his team relocated from Seattle to Oklahoma and became the ‘Oklahoma City Thunders.’ By the end of the year, Durant had raised his scoring average by five points as compared to the previous season. He was also considered for the ‘Most Improved Player Award,’ though he eventually came third.
He was selected for the 2010 ‘FIBA World Championship.’ He played brilliantly at the tournament, leading USA to the ‘World Championship’ trophy.
After a couple of years, Durant was selected for the 2012 Olympics, where he not only set the record for total points covered in an Olympic basketball tournament, but also helped his team earn a gold medal. He again played for the national team in the 2016 Olympics, where he helped the team win a gold medal once again. He was also named the 2016 ‘co-USA Basketball Male Athlete of the Year,’ along with Carmelo Anthony.
In July 2016, he signed a $54 million contract with the ‘Golden State Warriors’ for two years. Interestingly, his move was received negatively by public and the ‘NBA’ analysts.
Durant lost his debut match with the ‘Warriors’ against the ‘San Antonio Spurs’ on October 2016. He made a roaring come back, scoring a career high six block shots against the ‘Minnesota Timberwolves.’ He also created history by finishing with five blocks, five assists, ten rebounds, and 25 points in a single game.
Continue Reading Below
After suffering an injury, Durant returned to the 2016-17 season and played in the team’s third consecutive ‘NBA’ final where the ‘Warriors’ played against the defending champions ‘Cleveland Cavaliers.’ He helped his team win the championship by becoming his team’s top-scorer, averaging 35.2 points, 8.4 rebounds, and 5.4 assists while shooting 55.5 percent from the field, 92.7 percent from the free throw line, and 47.4 percent from the three-point range. For his brilliant performance, he was named ‘NBA Finals MVP.’
The next season was even more successful for the champion as the ‘Warriors’ reached the ‘NBA’ finals against the ‘Cavaliers’ at the ‘Western Conference’ finals and clinched their second consecutive win with Durant scoring a career-high 43 points, 13 rebounds, and 7 assists. He also won his second consecutive ‘Finals MVP’ award that season.
In the 2018-19 season, the ‘Warriors’ faced many losses against the ‘Los Angeles Clippers.’ Durant suffered injuries on his lower right calf while playing against ‘Toronto’ in Game 5 of the 2019 finals. Eventually, the ‘Warriors’ lost the finals in Game 6 and their chance at a three-peat.
Durant officially signed with ‘Brooklyn Nets’ on 7 July 2019, in a sign-and-trade deal. 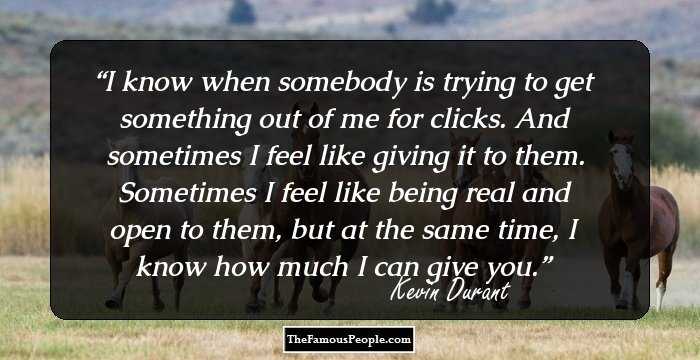 Quotes: Trying
Other Major Works
Durant became involved in YouTube in 2017, creating his own self-titled channel where he uploads vlogs of his daily life. He has more than 750,000 subscribers and uploads his videos regularly.
In February 2018, ‘Deadline’ reported that Durant was in talks with producer Brian Grazer for a possible partnership with his production company ‘Imagine Entertainment’ to create a basketball-themed drama series for ‘Apple.’
Awards & Achievements
During his collegiate career in 2007, Kevin Durant won the titles, ‘Naismith College Player of the Year,’ ‘Big 12 Player of the Year,’ ‘USBWA National Freshman of the Year,’ and ‘NABC Division I Player of the Year.’
He earned the ‘FIBA World Championship’ gold medal, along with the ‘FIBA World Championship Most Valuable Player’ in 2010.
Continue Reading Below
Playing for the US national team, he earned gold medals at the 2012 and 2016 Olympics.
At the ‘NBA,’ Durant won the ‘NBA Rookie Challenge MVP’ (2009), ‘NBA All-Star Game MVP’ (2012, 2019), ‘NBA Most Valuable Player’ (2014), and ‘NBA Finals Most Valuable Player’ (2017, 2018) among other honors. He has been an ‘NBA All-star’ for the past ten consecutive years from 2010 to 2019 and an ‘NBA’ champion two years in a row (2017 and 2018). 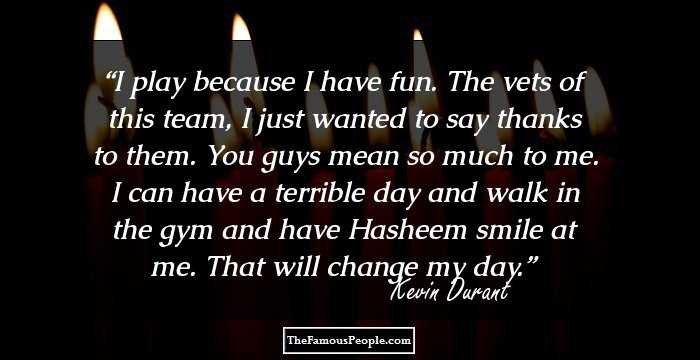 Personal Life & Legacy
Throughout his career, Kevin Durant has dated several women, including Jasmine Shine, Ashley Champ, and Monica Wright. Lately, he has been linked with Cassandra Anderson.
He is also known for his philanthropic activities. He pledged $1 million to the ‘American Red Cross’ for the victims of the 2013 Moore tornado.
Durant is associated with the non-profit after school music program ‘P'Tones Records’ at their Washington, D.C. branch where he serves as the organization’s spokesperson.
Trivia
Durant is a devout Christian and visits the Chapel before every game. He also has religious tattoos on his stomach, wrist, and back.
He enjoys playing video games in his free time.
He was a credentialed photographer for ‘The Player’s Tribune’ at ‘Superbowl 50’ in 2016.

Quotes By Kevin Durant | Quote Of The Day | Top 100 Quotes

See the events in life of Kevin Durant in Chronological Order