( The Greatest Basketball Player of All Time)

Popularly known as His Airness or Air Jordan, Michael Jordan won the hearts of millions with his famous dunk shot. The basketball legend showed a knack for the game from the time he was in school. Having won several awards in college for his basketball prowess, he decided to compete in the NBA Championships at the age of 21. Though not chosen by the best NBA team, this talented player gave it his all as a member of the Chicago Bulls. He proved to be a match-turner, changing the fate of his team with his talent. From being a losing team, Chicago Bulls began winning most of their matches, and finally emerged victorious for six consecutive championships. This remarkable player is considered a treat to watch, and though he retired on two occasions, he returned every time only to mesmerize the spectators. From Chicago Bulls, he moved on to the Washington Wizards, first serving as President of Operations, and then as a player. After his final retirement, Michael Jordan took over the Charlotte Bobcats as a part-owner, with a majority hold in stakes. He then went on to become the only billionaire basketballer in history. Michael Jeffrey Jordan was born to James and Deloris, on February 17, 1963, in Brooklyn, New York. James worked in the electrical and heavy equipment industry, while Deloris was a banker. The family, consisting of four other children Larry, James R. Jr., Roslyn, and Deloris, settled down in Wilmington, North Carolina.

Michael went to Wilmington's Emsley A. Laney High School, where he developed a love for sports like basketball, baseball, and football. As a child, he was taught by his parents to be hardworking and independent. In school, he wanted to join the sophomore basketball team, but was rejected because he was too short.

Instead of being depressed, he joined the school's junior basketball team. He played exceptionally well, and worked hard to increase his height. Having impressed everyone, he was chosen for the McDonald's All-American Team, the best of all high school basketball teams.

As a senior in high school, the young boy played for college teams like North Carolina, Virginia, Duke, and Syracuse. Finally, in 1981, he was offered a scholarship by the University of North Carolina based on his performance in basketball. In college, he graduated in cultural geography.

At the university, he was trained by the famous basketball coach Dean Smith, and Michael Jordan was named Freshman of the Year by the Atlantic Coast Conference. In 1982, his jump shot was a major factor in the team winning the NCAA Championship against Georgetown University. 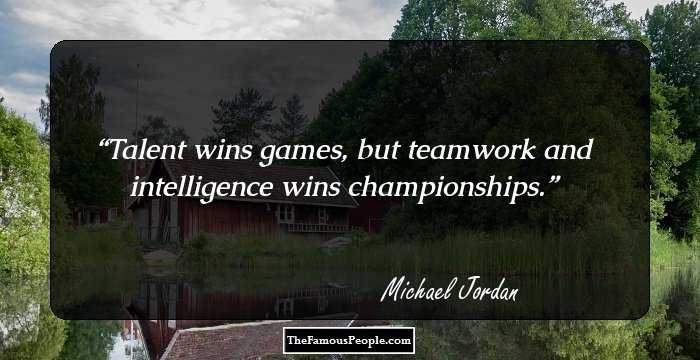 In 1984, he dropped out of university with the aim of joining the NBA Draft. The young basketballer was selected by Chicago Bulls after players Hakeem Olajuwon and Sam Bowie were chosen by Houston Rockets and Portland Trail Blazers, respectively.

In the Summer Olympics held in 1984, he was part of a gold medal-winning team that included players like Sam Perkins, Steve Alford, and Patrick Ewing.

Michael Jordan came back to college and graduated from the University of North Carolina two years later.

During 1984-87, as a part of Chicago Bulls, a team that didn't have much luck with victory, Jordan proved his mettle with an above average points per game of 28.2.

He gained immense popularity, which was resented by players of his own and rival teams alike. As a result, team mates did not pass the ball to him on several occasions, and the Bulls lost the playoffs to Milwaukee Bucks. The enthusiastic basketball player took his team through to the playoffs of every season he participated in. The young star scored 100 blocks and 200 steals in a single season, becoming the first to do so in the history of NBA.

Even though the Bulls lost the playoffs to the Boston Celtics, the former fared relatively better than before.

From 1987-90, the new star of Chicago Bulls led his team through to the first round of NBA Playoffs in the first season, and all the way to the finals in the next two seasons. They defeated teams like Cleveland Cavaliers, New York Knicks, Milwaukee Bucks, and Philadelphia 76ers, but in each season, Detroit Pistons led by Isiah Thomas, beat the Bulls and knocked them out of the tournament.

In the next season of 1990-91, Michael Jordan helped the Bulls sail through and reach the Eastern Conference finals. His team faced Detroit Pistons once again, but this time, it was the Chicago Bulls that emerged victorious. The winners played the NBA finals against the Los Angeles Lakers, earning their first championship victory in the history of the game.

In the Summer Olympics of 1992, he was once again a member of what is known as the dream team, a gold medal-winning group of talented players like Magic Johnson, David Robinson, and Larry Bird.

In 1993, the popular basketballer was observed gambling, an allegation that he owned up to, in an interview on the 60 Minutes show. The same year, on October 6, he publicly declared his decision to retire, stating his father's murder as one of the reasons.

The following year, the basketball player signed up with Chicago White Sox for a baseball contract. This was Michael Jordan's way of realizing his father's dream to see his son play baseball. The same year, he also played for other minor baseball teams, including Birmingham Barons and Scottsdale Scorpions.

Without their star player in the team, the Chicago Bulls failed to perform at the NBA championships. In 1995, the famous player decided to give up baseball and return to basketball, playing once again for the Bulls.

His comeback match was played against the Indiana Pacers, which the Bulls won. His team went on to win games against Atlanta Hawks and New York Knicks.

However, in the Eastern Conference semifinal against the Orlando Magic, the Bulls failed to capture a victory. Despite Michael's average of 31 points in each game, Orlando Magic won the season.

During 1995-98, the famous sportsperson played three seasons of NBA championships, beating Seattle SuperSonics and Utah Jazz in two championships. This win, along with five victories earlier, was an important milestone in his career as it made him the six-time recipient of the Most Valuable Player (MVP) title at the NBA finals.

On January 13, 1999, Jordan retired once again from the game. The following year, he came back as the President of Basketball Operations for team Washington Wizards.

In 2001, he decided to begin playing again, and trained rigorously to get back in form. He also appointed his old coach from the Chicago Bulls, Doug Collins, to train his team Washington Wizards.

The same year, on September 25, he announced that he would play basketball for the Washington Wizards, declaring that he would contribute his whole salary for the victims of the 9/11 attack. In the 2001-02 season though, he could not play too many games, owing to a serious knee injury.

In 2003, he played his final NBA All-Star match against Philadelphia 76ers, and beat Kareem Abdul-Jabbar's record of scoring the most number of points. However, after several intentional fouls against Michael, the Washington Wizards lost. The celebrated player, however, was given a standing ovation that lasted for three minutes.

Post retirement, Michael Jordan was removed from his post of President with the Washington Wizards. In 2004, he founded his own motorcycle racing team, Michael Jordan Motorsports. Two years later, he became part-owner of the NBA team, Charlotte Bobcats, holding a majority stake in its operations. 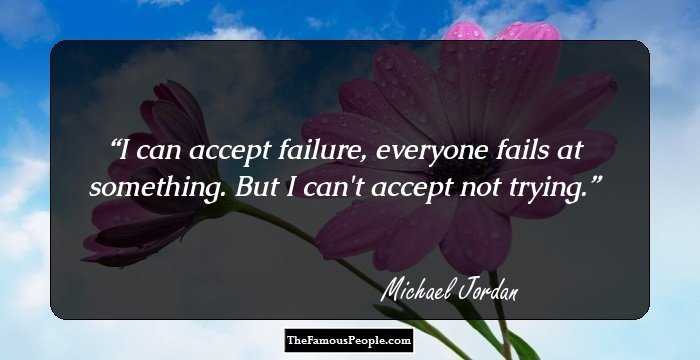 During 1984-88, this talented player received several NBA awards, including Rookie of the Year, Defensive Player of the Year, and Slam Dunk Contest Champion. He has also won the NBA Championship on several occasions.

In 1984, as a member of the winning basketball team in the Summer Olympics, he was honored with a gold medal.

Sports Illustrated magazine named him the Sportsman of the Year in 1991. The following year, he won another gold medal for his team's victory at the Summer Olympics.

Michael Jordan has been ranked as one of the greatest sports personalities by several magazines, including SLAM and ESPN Sports. He has also been included in the Hall of Fame by Naismith Memorial and North Carolina Museum of History.

In 1989, Jordan got married to Juanita Vanoy, but they separated after 17 years of marriage. As settlement, Juanita received 168 million dollars from her former husband. The former couple has two sons, Jeffrey and Marcus, both basketball players, and a daughter named Jasmine.

On April 27, 2013, Michael Jordan got married to model Yvette Prieto, whom he had been dating for quite some time, at the Bethesda-by-the-Sea Episcopal Church. The following year, the couple had twin daughters, Victoria and Ysabel.

This former sportsperson is so popular that he has been signed on by several big brands as their ambassador. He has endorsed top brands like McDonald's, Wheaties, Chevrolet, Nike, Hanes, Coca-Cola, and Gatorade.

Michael Jordan has donated money for charitable organizations like Hales Franciscan High School in Chicago and Habitat for Humanity in Georgia. 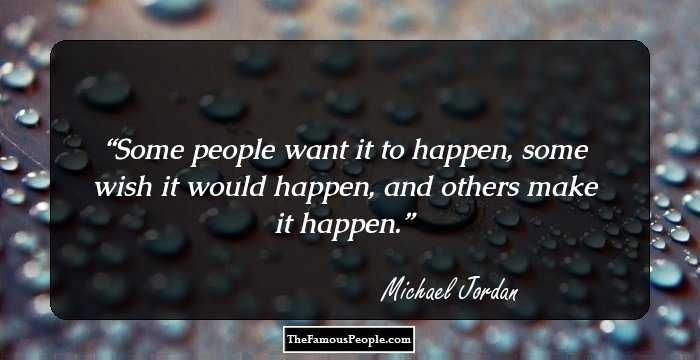 Karla Knafel, a former lover of this famous personality, alleged that he had paid her a big sum of money to remain silent about their relationship and her pregnancy. A DNA test however proved that the accused was not the father, and that the allegations were false.

Quotes By Michael Jordan | Quote Of The Day | Top 100 Quotes

See the events in life of Michael Jordan in Chronological Order