William Rehnquist, the sixteenth chief justice of the United States of America, was an eminent jurist and a member of the conservative wing of the court. He presided over many important and significant cases in his long career and considered himself as an ‘apostle of judicial restraint’. He was a fierce advocate of federalism and wrote numerous majority opinions that cut back the power of the federal government and granted more autonomy to the states. The National League of Cities versus Usery case was one of those in which Rehnquist struck down a federal statute that regulated the wages and hours of state government employees. His court is remembered for stopping the vote count in Florida in the George W Bush versus Al Gore US presidential election case of 2000. The ruling resulted in giving state’s electoral votes and the presidency to Republican candidate Bush. Salmon P. Chase
DID WE MISS SOMEONE?
CLICK HERE AND TELL US
WE'LL MAKE SURE
THEY'RE HERE A.S.A.P
Quick Facts

Cause of Death: Thyroid Cancer

William Rehnquist was born on October 1, 1924 and spent his formative years in Shorewood, Milwaukee. His father was a sales manager and his mother was a local activist and a homemaker. They were conservative republicans.

He did his schooling from Shorewood High School and later served in the Army Air Corps during the last leg of World War II.

During this time he served as a campaign manager for Republican presidential nominee Barry Morris Goldwater in the 1964 US election. Goldwater was defeated comprehensively by the incumbent Democratic President Lyndon B Johnson.

William Rehnquist’s journey as a legal officer began when he was appointed by President Richard Nixon as Assistant Attorney General of the Office of Legal Counsel in 1969. This was followed by his appointment by Nixon as Associate Justice of the US Supreme Court in 1971.

In 1986, he was nominated to the post of Chief Justice of the US Supreme Court by President Ronald Regan and was approved by the Senate by a count of 65-33. Rehnquist served as the Chief Justice for almost nineteen years until his death in 2005.

His tenure saw the arbitration of many important cases and landmark judgments. During his term, the court restricted the power of the Congress to expand federal authority pertaining to areas like religious expression, intra-state commerce and criminal procedure and stated them to be the rights of the states.

It was often said that he was not a great defender of the First Amendment, but many times Rehnquist did show flexibility in his opinions that protected the rights of First Amendment plaintiffs.

A case in point is the legal fight between Hustler Magazine and Pastor Jerry Lamon Falwell Sr. The court in a unanimous 8-0 verdict upheld the First Amendment right of magazine publisher Larry Flynt to the caricature Falwell.

A landmark case during Rehnquist’s tenure as chief justice was the Romer versus Evans case, which dealt with sexual orientation and state laws. The majority voted in favour of legislative, executive or judicial action to protect homosexual citizens if they were discriminated on the basis of their sexual orientation.

In Romer versus Evans case, Rehnquist dissented and maintained that Constitution did not say anything about the subject and maintained that the issue could be resolved by normal democratic means. But in a departure of sorts, Rehnquist showed his flexibility when he joined the liberal justices and ordered a judicial review of a case relating to the dismissal of a homosexual CIA employee and allowed him to sue for improper personnel practices on the basis of constitutional law.

He also voted to allow same-sex sexual harassment claims to be arbitrated.

Another significant case during his tenure was the 1988 Morrison versus Olson case, wherein William Rehnquist wrote the majority opinion which upheld the right of the Congress to appoint independent counsels and initiate investigation against government officials and prosecute them.

Throughout his life, he steadfastly maintained that federal judges must not impose their personal views on the law. He was also of the view that one could not stray beyond the intent of the framers of the Constitution by reading broad meaning into the Bill of Rights.

Among other things, Rehnquist was of the view that the court's jurisdiction did not apply over the issue of abortion and he voted against the establishment of legalised abortions. He was also in favour of allowing greater state assistance to religious schools.

While working as a law clerk in the US Supreme Court, Rehnquist had written a memorandum arguing against federal court-ordered school de-segregation. He had sought to defend ‘separate-but-equal’ doctrine.

The memo was in the backdrop of the landmark case of Oliver Brown versus Board of Education, in which the court ruled in 1954 that US state laws establishing racial segregation in public schools were unconstitutional.

The controversial memo was brought up in both his 1971 and 986 Senate confirmation hearings. Distancing himself from it, he testified in the hearings that the memorandum echoed the views of Justice Jackson and not his own. However, there are those who believe that the memo reflected Rehnquist's own views at that time.

In 1953, William Rehnquist married Natalie Cornell. They had three children. His wife died in 1991.

In October 2004, he was diagnosed with anaplastic thyroid cancer. He died at his Arlington home, Virginia, on September 3, 2005 at the age of 80.

See the events in life of William Rehnquist in Chronological Order 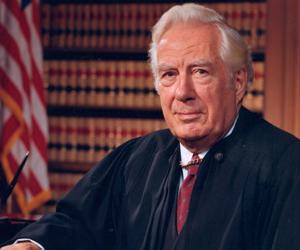