William Penn Adair Rogers was an American cowboy, vaudeville performer and actor, famously known as ‘Oklahoma's Favorite Son’. He is one of the most celebrated and appreciated artists of all time. Due to his mother’s demise while he was a child and his father’s dominating nature, he left his studies and traveled in search of his true calling in his teenage years. He had a keen interest in cowboys and he learned the art of rope and lasso. Eventually, he became a vaudeville performer and a beloved of audiences through his comical interactions with them. His humor was crisp with clever jokes on economical and social issues which instantly connected with the people and made him a superstar performer. He also acted on Broadway and movies which proved to be quite successful in his career. His other works consisted of writing for magazines and newspapers along with radio broadcasting. He was an avid reader and a real enthusiast of aviation all his life and ironically died in an unfortunate plane crash at the age of 55. He had a folksy persona and a clever insight into the minds of his audience which made him a superstar of that era. His life is a classic example of struggle, passion and determination. 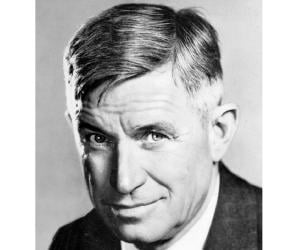 Will Smith
Actors #1755
Comedians #325
Film & Theater Personalities #3750
DID WE MISS SOMEONE?
CLICK HERE AND TELL US
WE'LL MAKE SURE
THEY'RE HERE A.S.A.P
Quick Facts

American Celebrities
American Men
Oklahoma Actors
Scorpio Actors
Male Comedians
Childhood & Early Life
He was born on November 4, 1879 at the Dog Iron Ranch in Indian Territory, near present day Oologah, Oklahoma to Clement Van Rogers, a rancher and Mary America Schrimsher.
He was the youngest of eight siblings and only three of his siblings, Sallie Clementine, Maude Ethel, and May, survived till adulthood. He was part Cherokee, and liked to boast about this legacy.
His father had high ambitions and expectations for him whereas he was more easygoing like his mother. His mother passed away when he was 11, which affected his relationship with his father and they had ideological conflict.
Although he was rewarded with only average grades in school, he was a well read and highly knowledgeable person. He left Oklahoma as a teenager in search of his passion and the career he wanted to pursue in his life
Continue Reading Below
You May Like

The Hottest Male Celebrities With The Best Abs
Career
From 1898 to 1902, he worked in Texas as a cowboy and then as a gaucho in Argentina.
In 1902, he joined Texas Jack’s Wild West Circus as a trick roper and rider. During his performances, he discovered his real talent of interacting with the audience through his witty sense of humor.
In 1904, he began to try his roping skills on the vaudeville circuits. Willie Hammerstein, an American theatre manager, visited to see his vaudeville act and was impressed by his talent. He signed him for his theatre acts and he soon became a star with his technical ability and charming personality.
In 1915, he started his Broadway career and appeared in the Florenz Ziegfeld's ‘Midnight Frolic’. In 1916, he performed in ‘The Wall Street Girl’ and soon made his way to perform for the famous theatrical productions, ‘Ziegfeld Follies’, where he performed from 1916 to 1925.
In 1918, he made his first silent movie ‘Laughing Bill Hyde’. He made 48 silent movies which were quite successful, but they shadowed the very essence of his popularity which was commentating and talking on stage. Later, sound arrived and he made his first sound movie in 1933. He made a total of 21 sound movies in his career.
In addition to films, he worked for The New York Times from 1922 to 1935 and also wrote for the magazine, ‘The Saturday Evening Post’. He also made radio broadcasts for the Gulf Oil Company from 1930 to 1935.
He had a real passion for airplanes and frequently flied to different parts of America with pilots flying the mail in early air mail flights.
Major Works
His vaudeville acts were some of his major works in which he connected with his audience on a deep level. He incorporated witty jokes and humorous comments in his vaudeville acts on political and social issues which the audience seemed to enjoy the most.
In 1929, when sound was introduced in movies, he made movies such as ‘State Fair’ and ‘Dr. Bull’ in 1933, ‘David Harum’ and ‘Judge Priest’ in 1934 and many more. His silent movies were successful earlier but his verbal magic made him a real superstar of the industry.
Personal Life & Legacy
In 1908, he married Betty Blake and they were blessed with four children; Will Rogers, Jr., Mary Amelia, James Blake, and Fred Stone.
His son, Will Rogers, Jr. became a World War II hero and a member of Congress whereas his other son, James, became a rancher. His daughter, Mary, became a Broadway actress. The family lived in New York but in summers, they managed to visit his home town Oklahoma for a brief period.
He died on August 15, 1935 in a plane crash along with the famous pilot, Wiley Post near Point Barrow, Alaska. The sudden demise of this great American humorist and actor left everyone in sadness and despair.
In Oklahoma City, an airport was named after him, ‘Will Rogers World Airport’.
Will Rogers Medallion Award for Excellence in Western Literature is presented by The Academy of Western Artists at an annual gathering in the Dallas–Fort Worth metroplex every year.
In 1936, Will Rogers Memorial Center was built in Texas with his life size statue and the NVA Hospital located in Saranac Lake, New York was renamed to the Will Rogers Memorial Hospital in his honor by the National Vaudeville Artists association.

See the events in life of Will Rogers in Chronological Order