Fred McFeely Rogers was a television personality, writer, musician, producer, and puppeteer. He is one of the most well-known television personalities in the history of American television. He created and hosted the preschool educational TV series ‘Mister Rogers’ Neighborhood.’ His gentle and kindhearted personality made him a role model among the young audience in the USA. Rogers’ show ran uninterrupted for more than three decades and became one of the longest-running television shows in the world. Rogers was born in a family which had interest in arts, and he learned music at a very young age. He later hosted and composed music for many TV shows targeted at children. After working with commercial TV channels for a brief period of time, he started working with community television channels as he felt that commercial TV channels could not work for the good of the society. Rogers was awarded a ‘Life Time Achievement Emmy’ and the highest civilian honor in USA. Several buildings and artworks in Pennsylvania are dedicated in memory of Fred Rogers. He was ranked 35 in TV Guide’s ‘Greatest TV stars of all time.’ Ainsley Earhardt
20th March In History
DID WE MISS SOMEONE?
CLICK HERE AND TELL US
WE'LL MAKE SURE
THEY'RE HERE A.S.A.P
Quick Facts

American Celebrities
American Men
Rollins College
Dartmouth College
Tall Celebrities
Childhood & Early Life
Fred Rogers was born on March 20, 1928, in Latrobe, Pennsylvania, USA. He was the only child to his parents till he was 11 years old. His parents later adopted a baby girl named Elaine.
Inspired by his maternal grandfather Fred McFeely, Rogers developed interest in music at a young age. His maternal grandfather taught Rogers to play the piano.
Rogers was also encouraged to learn music by his mother. He used to sing while his mother played the piano. Rogers started to play piano when he was five years old.
He completed his schooling in ‘Latrobe High School’ in the year 1946. He got admission into the prestigious ‘Dartmouth College’ and then got transferred to ‘Rollins College,’ located in Winter Park, Florida. He received a BA in music composition in the year 1951.
He met his future wife Sara Joanne Byrd at ‘Rollins College.’ They got married in the year 1952 and had two children, James Rogers and John Rogers.
While visiting his parents during his senior year in college, he saw a television set for the first time in his life. He was immediately attracted to it and wanted to be a part of the television revolution that was sweeping across the USA at the time. 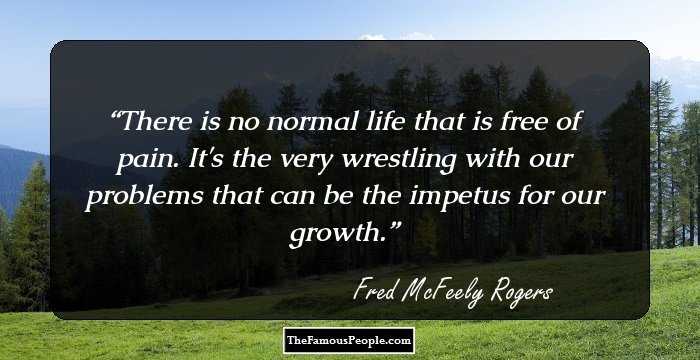 Continue Reading Below
Career
Due to his fascination for television, he applied for a job at the leading national television channel ‘NBC’ in the year 1951. He then worked in some of the musical programs of ‘NBC,’ such as ‘Your Hit Parade’ and ‘The Voice of Firestone.’
He quit ‘NBC’ as he thought the reliance of commercial television on advertisements limited their ability to educate and enrich the youngsters.
In the year 1954, he started working for the first community TV station, ‘WQED.’ He was a puppeteer in a children’s show called ‘The Children’s Corner.’ He worked as a co-host in an unscripted live TV for seven years. During this time, he developed many puppets, music tracks, and characters like ‘King Friday XIII’ and ‘X the Owl.’ These music tracks and characters were used in his later work.
During his time at ‘WQED,’ Rogers earned a degree in theology from the ‘Pittsburgh Theological Seminary.’ After his ordination, he continued his work with children’s television.
In the early-1960s, Rogers moved to Toronto and was contracted by the ‘Canadian Broadcasting Corporation’ (CBC) to work for the children’s program ‘Misterogers.’ Despite becoming popular with children, the show was discontinued after just three seasons.
He later developed a TV program called ‘Mr. Dressup’ along with his friend Ernie Coombs. The program was a big hit and became one of the longest-running children’s shows in Canada.
When Rogers returned to the USA, he bought rights for his show ‘Mr. Dressup,’ which was continued through ‘WQED.’
In the year 1968, Rogers started telecasting the biggest hit of his career, ‘Mister Rogers’ Neighborhood.’ The show became one of the major shows in the history of American television. At its peak in the year 1985, nearly eight percent of total American households tuned in to watch the show.
The show continued till the year 2001 when the final episodes were aired. ‘Mister Rogers’ Neighborhood’ was an educative show which demonstrated how different objects like bulldozers and train engines worked.
Continue Reading Below
Along with ‘Mister Rogers’ Neighborhood,’ Rogers created other television shows as well. In the year 1994, Rogers created a one-time special show named ‘Fred Rogers’ Heroes’ for ‘PBS’ channel. It consisted of documentary portraits of four real-life people who worked for the betterment of their communities.
Rogers’ career was not limited to television. Due to his love for children, he served as the chairman for the White House forum on child development and mass media in the year 1968. 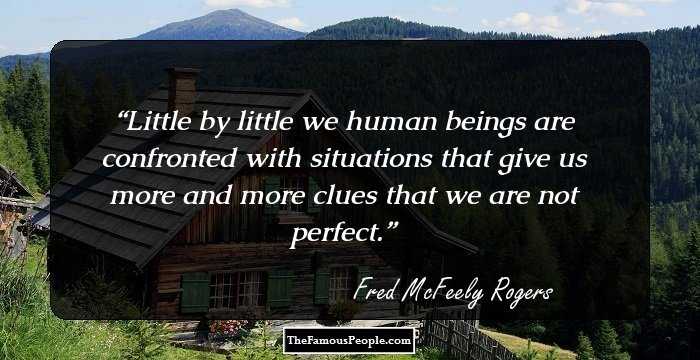 Major Works
The show 'Mister Rogers’ Neighborhood' was one of the biggest achievements in the life of Fred Rogers. The show is still considered as one of the achievements of American television. The show ran for more than three decades and was one of the longest-running television shows in the world.
Awards & Achievements
'Mister Rogers’ Neighborhood' won four ‘Emmy Awards’ at the time when it was telecast. Rogers was awarded the ‘Lifetime Achievement Award’ at the 1997 ‘Daytime Emmys.’
In the year 1999, Rogers was inducted into the ‘Television Hall of Fame.’
Rogers was awarded the ‘Presidential Medal of Freedom,’ the highest civilian honor in the USA in the year 2002 by George W. Bush. The award was given in recognition to his contribution to the welfare of children.
Rogers received a total of 40 honorary degrees in his lifetime. He even received a ‘Peabody Award.’ 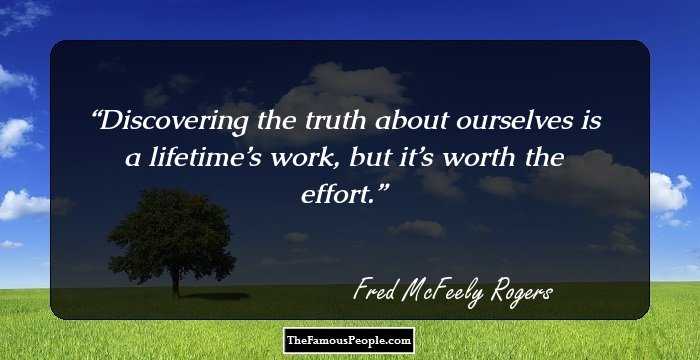 Personal Life & Legacy
Rogers remained married to Sara till his death.
After the final episode of ‘Mister Rogers’ Neighborhood,’ which was aired in the year 2001, Rogers was diagnosed with stomach cancer in 2002. A stomach surgery done in the year 2002 could not save him from the disease. He died in the year 2003 at his home with his wife by his bedside.
Many critics consider Rogers to be the greatest television personality in the history of American TV.
Trivia
Due to his interest in aviation, Rogers also got trained as a general aviation pilot.

Quotes By Fred Rogers | Quote Of The Day | Top 100 Quotes

See the events in life of Fred Rogers in Chronological Order