(Abolitionist, Journalist and Founder of the Anti-Slavery Newspaper ‘The Liberator’)

Advanced Search
William Lloyd Garrison was a well-known social reformer of the nineteenth century America. In his life time, he had been hailed as the voice of anti slavery movement in the North. Along with Isaac Knapp, he ran an abolitionist newspaper called ‘The Liberator’ and functioned as its editor. He was also one of the founders of American Anti Slavery Society (AASS). Garrison preached for total abolition of the practice and was ready to lay down his life to achieve his cause. Indeed, many a times his life was threatened and yet he never flinched from his goal of “immediate and complete emancipation all slaves”. In the Inaugural Editorial in the January 1, 1831, issue of The Liberator, he had said, “Urge me not to use moderation in a cause like the present. I am in earnest—I will not equivocate—I will not excuse—I will not retreat a single inch—AND I WILL BE HEARD.” And he was heard. He also took up the cause of women’s franchise and once slavery was abolished he started campaigning for civil rights for blacks. Indeed, he led a life of relentless struggle for the greater good of his fellow countrymen. American People
Social Reformers
American Men
Male Activists
Male Journalists
Childhood & Early Life
William Lloyd Garrison was born on December 12, 1805 in Newburyport, Massachusetts. His father Abijah Garrison was merchant sailing master, who came to Massachusetts from New Brunswick (Canada). He lost his job when the Embargo Act, passed by the Congress in 1807, caused decline in the commercial shipping. Unable to support his family he went missing in 1808.
William Garrison was brought up by his mother Frances Maria Lloyd. She was a religious woman with a strong but charming personality. Deserted by her husband she began to refer her son as William Lloyd Garrison.
With the desertion of the main bread earner, the family had to struggle hard to survive. At some point of time, William was sent to Baptist deacon, where he received rudimentary education. He came back home in 1814 and began to sell lemonade and candy made at home by his mother. To support the family, he also delivered wood, worked as an apprentice under a shoe maker and also a cabinet maker.
In 1818, when he was barely thirteen years old, he became indentured to Ephraim W. Allen of the Newburyport Herald under a seven year contract. Very soon, he became an expert compositor and also started writing articles under pseudo names. He would later use the expertise learnt here in running ‘The Liberator’. 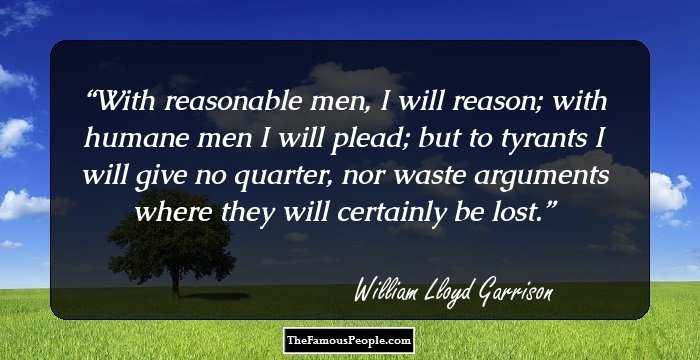 Quotes: Will, I
Continue Reading Below
Career
When the contract ended in 1826, Garrison and another young printer named Isaac Knapp brought out their first newspaper with loaned money. It was called ‘Newburyport Free Press’. Although the venture was short lived, it helped him to come in contact with famed abolitionist John Greenleaf Whittier and allowed him to hone his writing skill.
In 1828, he joined ‘National Philanthropist’ of Boston as its editor. While working there he met Benjamin Lundy, a noted abolitionist and soon became attracted to the anti slavery movement. ‘Letters on Slavery’ by Presbyterian Reverend John Rankin also influenced him a lot and at the age of 25, he joined the movement full heartedly.
For a brief period, Garrison also joined the ‘American Colonization Society’, which intended to relocate the free blacks on the west coast of Africa. However, its main intension was to strengthen the system of slavery by removing the free blacks from American soil. Garrison not only disassociated with the movement, but also censured such activities.
In 1829, he joined Benjamin Lundy to become the coeditor of ‘Genius of Universal Emancipation’, published from Baltimore. Garrison changed the format of the paper and introduced a column called ‘The Black List’. It was devoted to the atrocities done to the black population by white masters.
In ‘The Black List’, Garrison mentioned one Francis Todd, who he claimed was involved in slave trade. The man sued Garrison and the pro slavery court of Maryland pronounced him guilty.
Garrison was charged a fine of fifty dollar plus court cost, which he refused to pay. The court then awarded him a jail term of six months. However, Garrison was released after seven weeks as Arthur Tappan, another important abolitionist of that time, paid for him. Once out of jail, he and Lundy parted ways amicably.
In 1831, he and Isaac Knapp founded another anti slavery news paper called ‘The Liberator’ from New England. It preached immediate and complete abolition of slavery. The paper evoked mixed reaction from its readers.
Many slaveholders began to consider him a dangerous fanatic and blamed him for Nat Turner’s revolt. He was also indicted by North Carolina grand jury for distributing inflammable materials. In addition, Georgia Legislature offered a $5,000 reward to anyone who could bring him to the state for trial.
Conversely, Garrison’s popularity began to increase in another section of the society. By 1832, he had enough followers to float ‘New England Anti Slavery Society’, which in due course was renamed as ‘Massachusetts Anti Slavery Society’.
Continue Reading Below
In 1833, he expanded his movement and along with Arthur Tappan and Frederick Douglass established ‘American Anti Slavery Society’. It propagated that slavery was a heinous crime and was anti Christian. Side by side, he continued writing editorials for ‘The Liberator ‘.
By 1834, ‘The Liberator’ had two thousand subscribers, many of whom were whites. Very soon, it became very popular in the Northern States. By 1861, its circulation reached Canada and England. The paper also began to be received in different governmental institutions such as White House and Congress as well as in State Legislations and Governor’s Houses.
Meanwhile opposition to his anti slavery stance began to grow. In 1835, while attending an anti slavery meeting in Boston, Garrison was chased and captured by a blood thirsty mob. They then tied a rope around his waist and dragged him down the street. Fortunately, the sheriff was able to rescue him. He then took Garrison under protective custody, thus saving his life.
By 1837, a large number of women had joined the anti slavery movement. They wrote letters and articles against the practice of slavery, which were published in ‘The Liberator’. Since in those days women were not expected to take part in public debates, Garrison was asked not to encourage such things.
Ignoring such appeals, he declared in the December 1837 issue of ‘The Liberator’ that he would support the rights of women in every field. Thus along with anti slavery movement he slowly turned into a champion for the women’s cause.
In 1840, Garrison’s role in the promotion of women’s rights caused some prominent abolitionist to leave American Anti Slavery Society. They formed the men’s only American and Foreign Anti Slavery Society.
Undaunted, William Lloyd Garrison went ahead with his conviction. He even refused his seat as a delegate in the World Anti Slavery Convention in London because women were not allowed as delegates in that conference and sat with them in the spectator’ gallery.
Garrison always distanced himself from political activities because he was of the opinion that such activities involved compromise. However, some of the leaders of the movement wanted to solve the issue politically and therefore, in November 1839, they parted ways to form the Liberty Party.
In spite of that, Garrison and his paper ’The Liberator’ remained the main spokesperson for the anti slavery movement. He even criticized the US Constitution as pro slavery and in 1854 he went to the extent of burning a copy of it.
Continue Reading Below
Garrison was much rejoiced by the Emancipation Proclamation issued on1st January, 1863 by President Abraham Lincoln. It seemed that what he fought for was soon to be achieved.
In 1865, The American Civil War came to an end and slavery was outlawed by the 13th Amendment of the Constitution. Finding his mission completed he resigned from the post of American Anti Slavery Society saying that the problems of freed slaves could be best solved by new organizations.
At the end of the same year, he stopped the publication of ‘The Liberator’ because he felt that the paper had also achieved its goal. However, he continued to support black civil rights, free trade, and women suffrage.
In 1870s, he played a key role in the women suffrage movement in New England. He also became the President of the American Woman Suffrage Association and the Massachusetts Woman Suffrage Association. 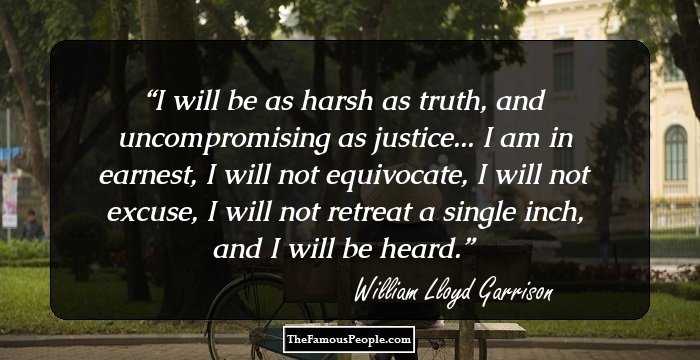 Quotes: Will, I
Major Works
The founding of ‘The Liberator’ in 1831 was the most important work in the life of William Lloyd Garrison. He used this paper to create awareness against slavery and thus forcing its abolition.
Formation of American Anti Slavery Society in 1833 was another important achievement in the life of Garrison. It helped to bring a number of abolitionists under one umbrella.
Personal Life & Legacy
William Lloyd Garrison married Helen Eliza Benson on September 4, 1834. She was the daughter of a retired abolitionist. The couple had seven children, two of which died in childhood. He remained close to his children till death.
His wife Helen suffered a stroke in 1863. After retirement in1865, Garrison spent much of his time taking care of her. When she died on January 25, 1876 Garrison was grief stricken and it was long before he could come out of this loss.
Garrison contracted kidney disease in 1877. He then shifted to New York to live with his daughter’s family. As his condition grew critical all his children joined him. On May 24, 1879, he lost consciousness and passed away before midnight.
William Lloyd Garrison was buried in Boston’s Forest Hill Cemetery. At his death, flags were flown in half mast all across the city and the pall bearers were prominent abolitionist of that time.
After his death, a memorial to Garrison was constructed on the mall of Commonwealth Avenue in Boston. 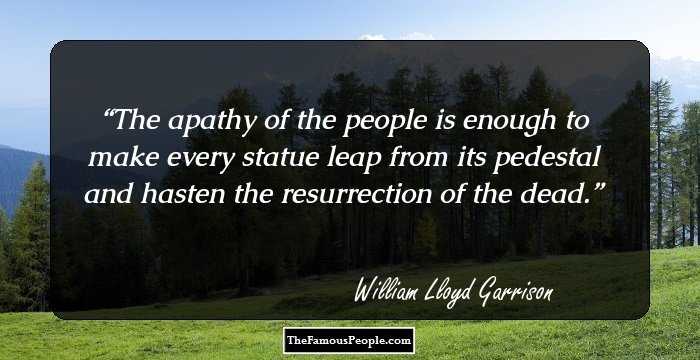