Wilbur Wright was an aviator and inventor who along with his brother Orville Wright developed the world's first successful airplane. The Wright Brothers were the pioneers in building a power-driven, controlled airplane that could sustain human flight. Wilbur’s fascination with flying began when his father bought him a toy helicopter based on the design of Alphonse Pénaud, a French aviation pioneer. Wilbur was very close to his younger brother, Orville with whom he conducted his experiments. As a bright youngster, he was always on the lookout for new intellectual challenges. The Wright brothers were deeply influenced by the works of the German aviation pioneer, Otto Lilienthal who was the first person to make repeated gliding flights. Lilienthal’s tragic death in a gliding accident made Wilbur realize the importance of controls in an aircraft. The brothers studied all the models of the existing flying machines, and were determined to come up with something better. The brothers worked unceasingly for years towards building an airplane that could sustain flight while seating a human on board. In 1903, they were successful in designing and building the Wright Flyer, which The U.S. Smithsonian Institution described as "...the first powered, heavier-than-air machine to achieve controlled, sustained flight with a pilot aboard." American Celebrities
American Men
American Aviators
American Inventors & Discoverers
Aries Men
Childhood & Early Life
Wilbur Wright was one of the seven children born to Milton Wright, a bishop, and his wife Susan Catherine Koerner. He was of mixed descent. Some of his siblings did not survive infancy.
His father once bought him & his brother Orville a toy helicopter made of paper, bamboo, and cork. Wilbur and Orville played with it until it broke and the brothers built themselves a new one.
As a student, he was intellectually motivated, excelled in school and was a good athlete. He harboured dreams of attending Yale University and becoming a teacher. He was a voracious reader and loved to write.
He had an accident while playing ice hockey which hurt him physically as well as psychologically. He lost all his ambitions, dropped his plans to attend university and instead stayed at home to care for his ailing mother. 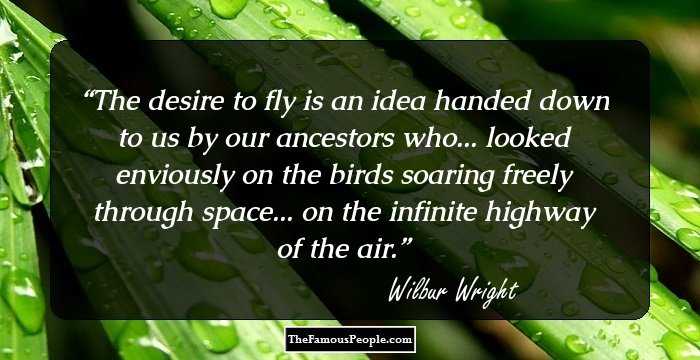 Continue Reading Below
Career
Wilbur and Orville started a printing business in 1889 with Orville as publisher and Wilbur as editor, and launched a weekly newspaper the ‘West Side News.’ The brothers designed and built the printing press on their own. They converted the paper into a daily, but on not finding success, they shifted their focus to commercial printing.
The brothers opened a cycle repair and sales shop, Wright Cycle Company, in 1892 in an attempt to capitalize on the bicycle craze that was sweeping the country.
The brothers’ growing interest in aeronautics was fuelled by the adventures of Otto Lilienthal, a German aviator who had successfully made several flights. Otto’s death in a gliding accident in 1896 deeply affected Wilbur and he resolved to find a better way to fly.
Wilbur and Orville began their mechanical experimentation after studying the works of others in the field of aeronautics like Chanute, Sir George Cayley, Lillienthal and Leonardo da Vinci.
The brothers designed and built three gliders in the period 1900-02. The first Wright glider was capable of carrying a man. They made further improvements in the next two gliders, and the third glider had a rear rudder to incorporate yaw control.
They built the Wright Flyer, the first successful powered aircraft, in 1903. It was the first aircraft to be capable of heavier-than-air flight. The Flyer was based on the design of the last of the Wright gliders. 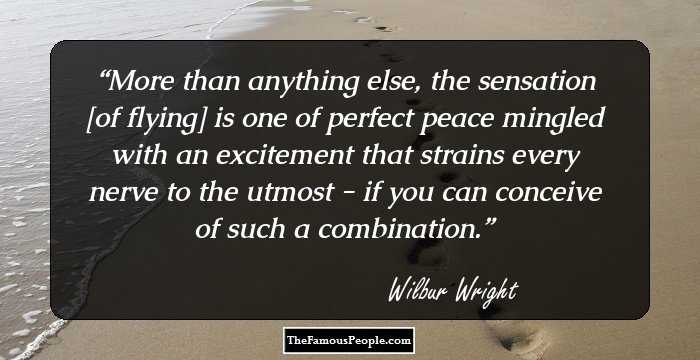 Quotes: You, Peace
Major Works
The brother’s experimentations in building a powered and safe airplane took a concrete shape with the building of the Wright gliders, a series of three gliders built between 1900 and 1902. The First Glider was capable of carrying a man.
The second glider was similar to the first, but it had larger wingspan. It was used to make 50 to 100 free flights. This glider was an improvement over the first, but it still did not provide the expected lift.
Continue Reading Below
In 1902, they built their third glider which incorporated yaw control by the use of a rear rudder. They further improved this glider by making the rudder steerable in order to provide better control. This glider was used to make unto 1000 glides.
The brothers built the Wright Flyer, the first powered aircraft capable of heavier-than-air flight, in 1903. It was based directly on the design of the 1902 glider. They used Giant Spruce wood as the construction material and the wings were designed with a 1 in 20 camber. The engine for the plane was built by Charlie Taylor, a mechanic working with the Wrights.
Awards & Achievements
Wilbur and his brother Orville were awarded the Congressional Medal of Honor in 1909 after they had returned home from a successful tour of Europe. They were also presented gold medals by the State of Ohio and the City of Dayton.
Wilbur, Orville and their sister Katharine were awarded the Legion of Honour in 1909 after their successful aviation demonstrations in 1908 and 1909. 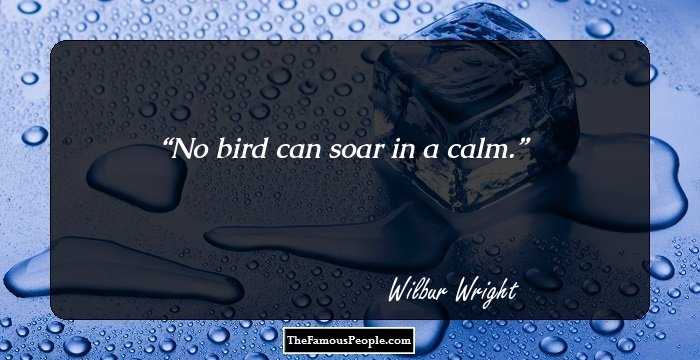 Personal Life & Legacy
Wilbur was very close to his father, brother Orville and sister Katherine. He never married nor had any children. He died of typhoid fever at the age of 45 in 1912.
Trivia
Initially the Smithsonian Institution refused to give credit to the Wright brothers for building the first powered and controlled aircraft.
Of all his children, Wilbur was his father’s favourite child.
None of the famous Wright gliders have been preserved though replicas were built later on.
Recommended Lists:
Inventors & Discoverers #259

See the events in life of Wilbur Wright in Chronological Order