Wangari Maathai was a renowned environmentalist activist who spent the better half of her life fighting for environmental issues. A Nobel Prize laureate, she was the first African woman and the first environmentalist to be bestowed with the prestigious award. Other than this, she has a number of other firsts to her credit, the foremost being the first African woman to be awarded with a doctorate degree. It was her excellent academic background and great skills that earned her prestigious positions at the University of Nairobi. It was in the 1970s that she founded the Green Belt Movement, which involved planting trees to conserve the environment. With time, the non-government organization expanded and focussed on environmental conservation and women’s rights as well. Towards the latter half of her life, she became a political activist. She was elected as a Member of Parliament and served as assistant minister for Environment and Natural Resources in the government of President Mwai Kibaki from January 2003 and November 2005. In 2006, France bestowed upon her one of its highest decorations, Legion d’honneur.
Continue Reading Below 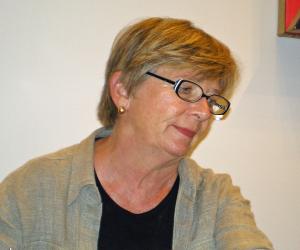 Kenyan Celebrities
Black Activists
Peace Activists
Social Activists
Political Activists
Childhood & Early Life
Wangari Maathai was born as Wangari Muta on 1 April 1940 in the village of Ihithe in the central highlands of the colony of Kenya. Two years later, she shifted along with her parents to a farm near Rift Valley where her father had found work.
In 1947, she returned to Ihithe, for lack of educational opportunities at the farm. At the age of eight, she enrolled at the Ihithe Primary School and within three years, moved to St. Cecilia's Intermediate Primary School. It was during her years at St Cecilia that she became fluent in English and converted to Catholicism, thus taking up the surname Maathai.
Completing her preliminary education with the top grade in 1956, she gained admission at Loreto High School. In 1960, she was one of the 300 promising students selected to study in the United States.
She gained admission at Mount St. Scholastica College in Kansas, wherein she majored in biology. Finishing her BSc in 1964, she enrolled at the University of Pittsburgh to get an MSc in biology, which she attained in 1966.
During her tenure at the university, she was first exposed to environmental restoration by group of environmentalists who were looking to free the city from air pollution. 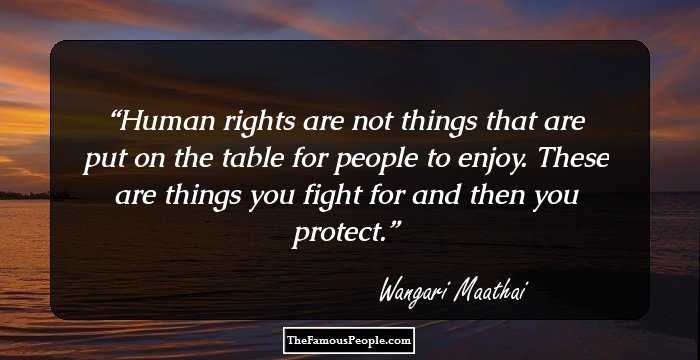 The Sexiest Men Of 2020, Ranked
Career
Concluding her studies, she returned to Kenya to take up the seat of a research assistant to a professor of zoology at the University College of Nairobi. However, the post was transferred to someone else due to gender and tribal biasness.
She finally found work under Professor Reinhold Hofmann in the microanatomy section of the newly established Department of Veterinary Anatomy in the School of Veterinary Medicine at University College of Nairobi
Following continuous persistence from Prof Hoffman, she relocated to Germany in 1967 to pursue a doctorate degree from the University of Giessen and University of Munich. Two years later, she returned to Nairobi to further continue her studies. She took up the post of the assistant lecturer at the University College of Nairobi.
In 1971, she became the first Eastern African woman to be awarded with a Ph.D. in veterinary anatomy. Her thesis work entailed development and differentiation of gonads in bovines
Her career graph witnessed an upward drift in the following years, as she first became a senior lecturer in anatomy, later on taking up the chair of the Department of Veterinary Anatomy and finally becoming associate professor in 1977. It was while holding on to these significant positions that she fought against gender and tribal biasness, strongly raising her voice for equal rights of women.
Other than holding on to her university profile, she worked for various civic organizations, serving as the member of the Kenya Association of University Women, local Environment Liaison Centre, National Council of Women of Kenya and Kenya Red Cross Society of which she was elected as the director in 1973.
It was while working for the non-profit organizations that she realized that the root of the problems in Nairobi was due to environmental degradation. In 1974, her husband won a seat at the Parliament’s Lang'ata constituency.
In an attempt to fulfil her husband’s claim of limiting unemployment in Kenya, she founded Envirocare Ltd. The company not only provided employment, but also attended to the idea of environmental restoration. The job required no special skills and involved people to plants trees to save the environment.
Envirocare’s first nursery was formulated in the Karura Forest. However, due to financial hitches, the project closed down. Nevertheless, her efforts did not go unnoticed and she was selected to be a part of the first UN conference on human settlements, known as Habitat I, in June 1976
Continue Reading Below
Returning to Nairobi, she promoted her idea of planting trees at the National Council of Women of Kenya (NCWK). Accepting the idea, the council led a procession on June 5, 1977 planting seven trees. Formerly known as ‘Save the Land Harambee’, it later became popular as Green Belt Movement.
Same year, she underwent personal crises following divorce from her husband and the subsequent charges of contempt of court. Her bad phase left her monetarily weak. As a result, she sent her kids to her ex-husband, while she took up a job at the Economic Commission for Africa which involved too much travelling.
In 1979, she contested for the position of a chairman at the NCWK. She lost by three votes and was eventually given the seat of vice chairman. Following year, she won an unopposed election and was chosen as the chairman, a position she retained until 1987. Despite immense financial problems, the organization gained worldwide fame for its environmental friendly work.
In 1982, she gave up her position at the University of Nairobi to contest for a Parliamentary seat. However, she was ruled ineligible for the same. She eventually found work as a coordinator for Green Belt Movement, which started to flourish.
With greater popularity, the Green Belt Movement expanded throughout Africa and founded the Pan-African Green Belt Network. It transformed to become a separate non-government organization and aimed to combat issues such as desertification, deforestation, water crises and rural hunger.
Towards the latter half of the 1980s, she started pressing for democracy, constitutional reform and freedom of expression. This did not go down well with the government which forced her to vacate the office.
In a series of events that followed, she launched a hunger strike to liberate political prisoners. Though the government did not bow down to the demands initially, they eventually surrendered and the prisoners were freed in 1993.
With an attempt to defeat the ruling party and bring down President Arap Moi from his chair, she twice attempted to unite the opposition, but in vain. As a result, in 1997, she ran for the seat of the president as a candidate of the Liberal Party but lost it.
In 2002, she again stood for the elections, this time as the candidate of the National Rainbow Coalition, which unified the opposition. She finally defeated the ruling party and took on the office of the Assistant Minister in the Ministry for Environment and Natural Resources and served in the capacity from 2003 until 2005.
Continue Reading Below
In 2005, she was appointed as the first president of the African Union's Economic, Social and Cultural Council and was selected a goodwill ambassador for an initiative aimed at protecting the Congo Basin Forest Ecosystem
In 2007, she was defeated in the Party of National Unity's primary elections for its parliamentary candidates. Choosing to run as a candidate of a smaller party, she was later defeated yet again in December 2007 parliamentary elections. 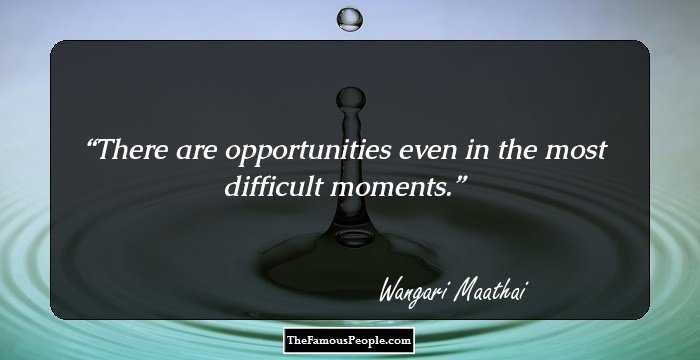 Awards & Achievements
Throughout her life and posthumously, she has received various awards and honors for her outstanding contribution as an environmentalist and activist. The most prominent of those include the Nobel Peace Prize in 2004 for her contribution to sustainable development, democracy and peace.
She was bestowed with one of France’s most honourable decorations, Legion d’honneur, in 2006.
She was awarded two honorary degrees, Doctor of Public Service by the University of Pittsburgh in 2006 and Doctor of Science by Syracuse University posthumously in 2013.
Personal Life & Legacy
She married Mwangi Mathai, in May 1969. The couple was blessed with three children. They parted ways in 1977 which was followed by a legal separation in 1979.
On September 25, 2011, she breathed her last dying out of complication arising from ovarian cancer.
A year after her death, Wangari Maathai Award was inaugurated to honour and commemorate an extraordinary woman who championed forest issues around the world.
On April 1, 2013, marking her 73rd birthday, she was posthumously honoured with a Google Doodle. 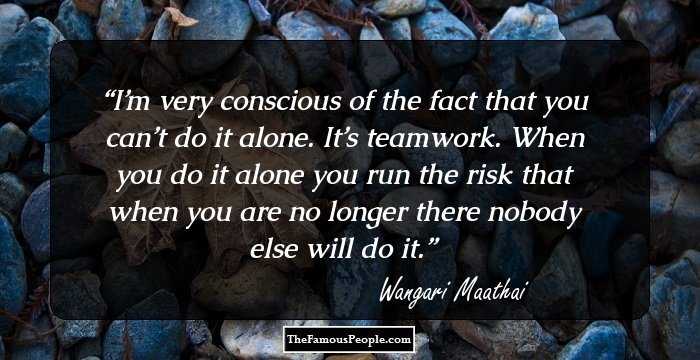 Quotes: You, Alone, Will
Trivia
This Nobel Prize winner from Kenya is the first African woman and the first environmentalist to win the prestigious prize for her tireless contribution in sustainable development, democracy and peace.
Recommended Lists:
Social Activists #31
Activists #308
You May Like

Quotes By Wangari Maathai | Quote Of The Day | Top 100 Quotes

See the events in life of Wangari Maathai in Chronological Order 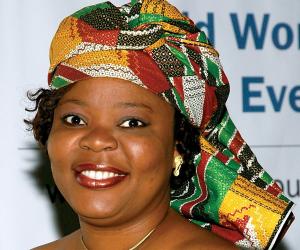 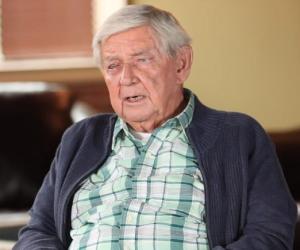