(Country Singer & Songwriter Best Known for His Songs: 'Pancho and Lefty' and 'For the Sake of the Song')

John Townes Van Zandt was an American folk/country singer and song-writer. He was not a very big artist during his lifetime, he only had a small fan base - people who used to relate to his singing and written songs. He started with singing in the bars and night clubs in Houston and later when his talent was recognized he started coming out with albums. But his musical career was only sporadic as his heroin and alcohol addiction and his random check-ins and check-outs from the rehabilitation centers could not help him much in keeping his career steady. In the late 1980s, Emmylou Harris first popularized Zandt’s work, Willie Nelson and Merle Haggard covered his song ‘Pancho and Lefty’, which peaked at number one on the Billboard country music charts. This made him enormously famous at one point in his life, yet he was only interested in planting morning glories, listening to Paul Harvey's radio show, and watching the sitcom ‘Happy Days’ in a house that had no heating, plumbing or telephone in Nashville. Zandt died a horrific death due to his drug and alcohol addiction at the age of 52. American Celebrities
Country Singers
Lyricists & Songwriters
American Men
Texas Musicians
Childhood & Early Life
Townes Van Zandt was born on March 7, 1944 in Fort Worth, Texas, to Harris Williams Van Zandt and Dorothy Townes. He belonged to a wealthy oil family and his father worked as a corporate lawyer.
Due to the nature of his father’s job, Zandt had to move quite frequently as a kid with his family. The whole family first moved to Midland, Texas, and then again changed base to Billings, Montana.
Zandt was presented with his first guitar at Christmas in 1956 and it was during this period that he was getting greatly influenced by singer Elvis Presley. In the same year, the family again had to move to Boulder, Colorado.
He attended the Shattuck School in Faribault, Minnesota, and he was a student with high IQ, which is why his parents aspired for him to become a lawyer and a senator. He later went to the University of Colorado.
Shortly after his admission in Colorado University, Zandt started to suffer from bouts of depression and binge drinking. He was diagnosed with manic depression and was admitted into the University of Texas Medical Branch.
After receiving insulin shock therapy and losing his long-term memory conclusively, Zandt tried to get into University of Houston’s pre-law program and later on aspired to join the Air Force. But, due to his depressive symptoms he was rejected. 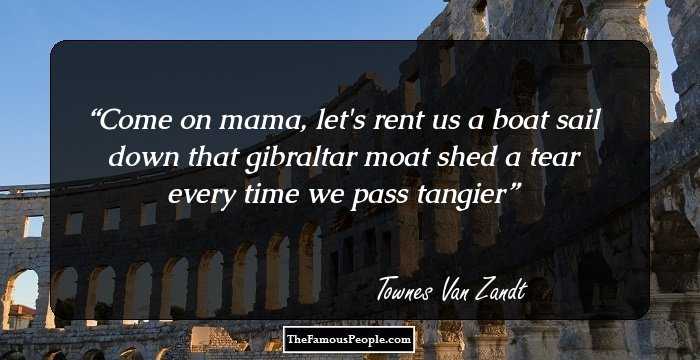 Quotes: Time
Continue Reading Below
Career
When all doors closed for Zandt, he still had his music, which is why he started playing guitar at the Jester Lounge, Houston, for about $ 10 per show. He used to cover songs written by Hopkins, Dylan, etc.
In 1968, while still doing his shows at the Jester Lounge, Zandt met songwriter Mickey Newbury, who convinced Zandt to go to Nashville and meet with a man who would later become his longtime producer, “Cowboy” Jack Clement.
The period from 1968 to 1973 proved to be Zandt’s most creative period. He released albums—‘Our Mother the Mountain (1969)’, ‘Townes Van Zandt (1969)’, ‘Delta Momma Blues (1971)’, ‘High, Low and In Between (1972)’ and ‘The Late Great Townes Van Zandt (1972)’.
Zandt featured in a documentary, ‘Heartworn Highways’ in 1973 with other artists like, Charlie Daniels, Steve Young, etc. He was shown in the movie at his run-down trailer home in Austin, Texas, drinking, shooting with gun and playing music.
In 1977, an album containing Zandt’s solo at a 1973 concert was released titled ‘Live at the Old Quarter, Houston, Texas’. It gained considerable success at the time and is still considered to be his best work.
He hired a new manager, John Lomax III in 1978, who started a small fan club for Zandt. People from all over the world wrote to him. He re-hired his old manager in the same year and released, ‘Flyin’ Shoes’.
In 1987, Zandt released his first studio album in nine years titled ‘At My Window’. Although, he was not as productive by now but this album changed his image again as the quality of his songs received critical appraisal.
Zandt did the opening for the band ‘The Cowboy Junkies’ in 1990 for their two-month long tour in America and Canada. This is how Zandt was introduced to a younger generation of fans. 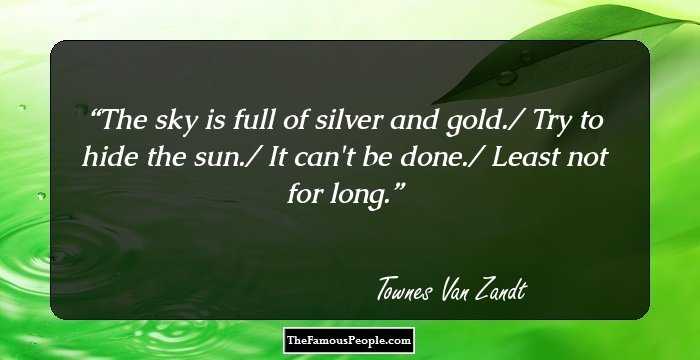 Continue Reading Below
Major Works
Zandt’s most creative work was released between 1968 and 1973-- ‘Our Mother the Mountain’, ‘Townes Van Zandt’, ‘Delta Momma Blues’, ‘High, Low and in Between’ and ‘The Late Great Townes Van Zandt’. It earned him a prestigious status in America and Europe.
Personal Life & Legacy
From 1965-1970, Zandt was married to Fran Petters and the couple had a son together.
A few years later he entered in a live-in relationship with Cindy Morgan and married her 1978 and few years after got divorced from her too.
He married for a third time to Jeanene Munsell in 1983, because he had impregnated Munsell. They had two children together: William Vincent and Katie Bell. Although, the couple divorced after a decade but they remained close until Zandt’s death.
Zandt was addicted to heroin and alcohol for all of his life - he used to shoot up cocaine, vodka and a mixture of rum and coke. He checked into rehab many times during 1970s and 1980s.
In 1996, Zandt suffered injuries from falling down the stairs and went into medical care 8 days later. On January 1, 1997 he died of cardiac arrhythmia. 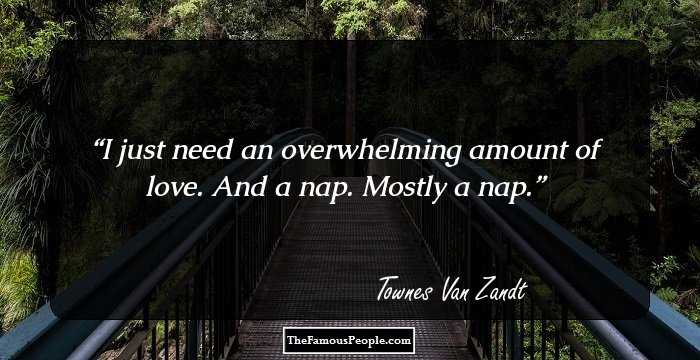 Quotes: Love, Need, I
Trivia
Around the time of his death, Zandt was in a long-distance relationship with Claudia Winterer from Germany. They met at one of his concerts in Hanau and he planned to marry her.
A film on his life and musical career, ‘Be Here To Love Me’ was released in 2006.
A biography on Zandt was released in 2007 by John Kruth, ‘To Live’s To Fly: The Ballad of the Late, Great Townes Van Zandt’.
By 1982, his alcoholism problem became so big that he was consuming at least a pint of Vodka every day and was diagnosed with delusional symptoms, mood disorders and impaired judgment and insight.
Recommended Lists:
Singers #429
Lyricists & Songwriters #458