One of the most popular and audacious journalists/authors of our age, Tom Wolfe heralded the ‘New Journalism’ movement, which broke the conventions and restrictions on journalistic writing. His unique and fresh style of writing suited the popular magazines including Harper's, Esquire, The New Yorker and Rolling Stone. He has also been credited for coining certain words/phrases such as ‘statusphere,’ ‘the right stuff,’ ‘radical chic,’ ‘the Me Decade,’ and ‘social x-ray’, which have become a part of English vocabulary. His influence, especially in the world of printed media, is massive and not only he taught writers to exercise a certain degree of independence, but also introduced the usage of present tense while writing profile articles. Later, he wrote novels which were commercially successful but many of the mainstream writers severely criticized his writings owing to the approach he adopted in his literary works. Even today, disagreements between him and writers such as John Updike, Norman Mailer, Gore Vidal and John Irving are common in the public eye. Nonetheless, he remains one of the greatest journalists of the present day, who showed a new technique and offered a new insight into journalism, which also dealt with analysis and evaluation of facts. American Celebrities
Journalists
Non-Fiction Writers
American Men
Lee University
Childhood & Early Life
Tom was born to Thomas Kennerly Wolfe, Sr. an agronomist and Louise Wolfe, a landscape designer.
As a child he attended the St. Christopher's School, Richmond, Virginia, where he was the student council president. Apart from being the editor of the newspaper published by the school, He was also an excellent baseball player.
He graduated in 1949 and went to the Washington and Lee University, where he pursued English literature.
At the university, he was appointed the editor of the sports section in the college newspaper and also helped establish ‘Shenandoah’, his college literary magazine.
He graduated with honors in 1951 after which he tried hands at baseball, and began playing at semi-professional level whilst at college.
He auditioned for the New York Giants in 1952, but the team could not keep him for more than three days, and he quit playing baseball. Thereafter, he attended the Yale University's American Studies and earned a Ph.D. 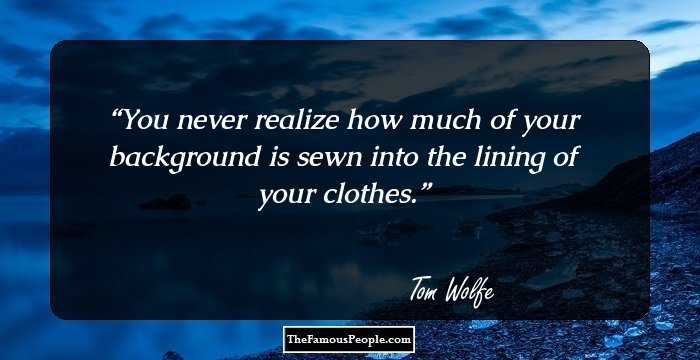 Quotes: You, Never
Continue Reading Below
Career
He began his career as a reporter for ‘The Republican’, a newspaper in Springfield, Massachusetts, in 1956.
He left ‘The Republican’ to work as a newspaperman for ‘The Washington Post’ where he covered the Cuban Revolution and was awarded the Washington Newspaper Guild Award for Foreign News Reporting, in 1961.
‘The New York Herald Tribune’ hired him in 1962, as a reporter and feature writer where he wrote articles for the paper’s Sunday supplement, later released as ‘New York Magazine’.
He was asked by the Esquire magazine to write an article on hot rod culture of Southern California, which he struggled to write. However, unable to deliver the article just before the due date in 1962, he sent a letter to the editor of the magazine explaining his ideas. Fascinated by the letter itself, the editor removed the greeting and published it as it was.
Wolfe received mixed reviews for the article which, according to him, promulgated ‘the New Journalism’, a novel journalistic writing style. A collection of his articles he had contributed to Esquire were made into a book and published under the title ‘The Kandy-Kolored Tangerine-Flake Streamline Baby’ in 1965. The book became a rage among car lovers.
It was followed by ‘The Pump House Gang’ in 1968, a book based on several features of the counterculture of the 1960s. The same year, he published ‘The Electric Kool-Aid Acid Test’, which went on to become one of his best books till date.
In 1970, he came up with an essay which was a critical account of a party given by Leonard Bernstein, a composer and musician, for raising funds for Black Panther Party. The essay was titled ‘Radical Chic & Mau-Mauing the Flak Catchers’.
He published ‘The Right Stuff’ in 1979, through which he offered an insight into the careers and lives of America's first astronauts.
His first novel ‘The Bonfire of the Vanities’ was published in 1987, which was based on the metropolitan lifestyle of New York.
Continue Reading Below
His next venture was his second novel ‘A Man in Full’ which took him 11 years to complete, and was published in 1998.
In 2001, he came up with ‘Hooking Up’, a short story and essay collection, some of which were written earlier for some popular magazines.
‘I Am Charlotte Simmons’, his third novel, was published in 2004. It was about a poor, down-to-earth and brilliant student from Alleghany County, North Carolina and her experience in a respectable university in the city.
‘Back to Blood’, his fourth novel based on the lives of Cuban immigrants in Miami, Florida, was published in 2012. 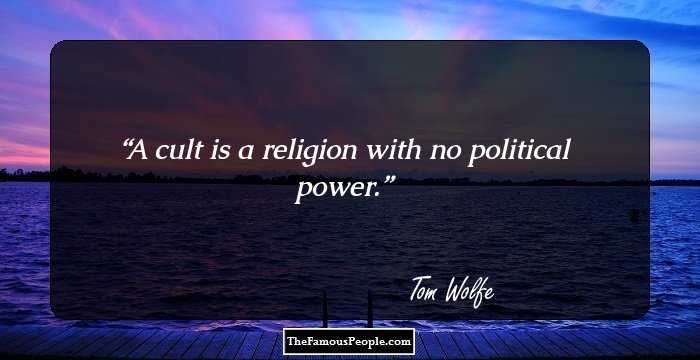 Quotes: Power
Major Works
His first collection of essays ‘The Kandy-Kolored Tangerine-Flake Streamline Baby’ was hugely popular and became a bestseller.
His book ‘The Electric Kool-Aid Acid Test’, which is considered one of his best works in the stream of ‘New Journalism’, explores the beginning and development of the hippie movement.
‘The Bonfire of the Vanities’, his first novel, received immense critical appreciation, much more than his other publications, and was also a bestseller for a very long time.
Awards & Achievements
In 1980, he received the National Book Award for non-fiction for his book ‘The Right Stuff’ which described the lives of the first astronauts of America.
He was honored with the National Humanities Medal in 2001, in recognition to his contribution towards humanities.
He was awarded the ‘Academy of Achievement Golden Plate’ for accomplishments in the field of journalism. 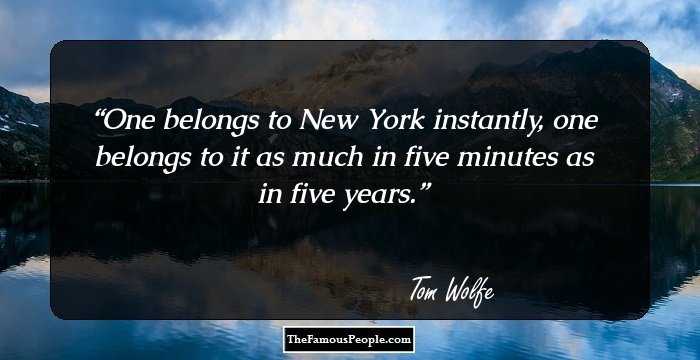 Personal Life & Legacy
He married Sheila Berger in 1978 and the couple has two children, Alexandra and Thomas.
An atheist, Wolfe is 82 years old and currently lives with his family in New York City.
Trivia
This famous American journalist-cum-author wears a white suit as his trademark.
This renowned American author and journalist once derided Wikipedia by saying “only a primitive would believe a word of it”.
Recommended Lists:
Media Personalities #364

See the events in life of Tom Wolfe in Chronological Order