Thomas Gainsborough was an 18th century English painter famous for his versatility. As an artist he initially gained fame for his technique of painting landscapes and became quite well-known for the manner in which he depicted light with his brushstrokes. Eventually he started painting portraits as he needed more income to provide for his family. He proved to be very talented at portraiture too and soon he began receiving commissions from the rich and the noble, including King George III himself. He completed many paintings for the king and was at one time considered to be a contender for the position of the royal painter. However, the king was obliged to select someone else to this position though Gainsborough remained the king’s favorite. Born to an artistically inclined mother who loved painting, Thomas too developed a love for the arts at a young age. His father, a weaver, supported and encouraged his son’s pursuits and sent him to study etching, painting and portraiture under the renowned William Hogarth. He soon embarked on a career as a professional artist and gained much appreciation for his landscapes. Another area of his interest was portraiture and he became a favorite of the royal family after painting the portraits of King George III and his queen. At the time of his death he was counted among the most distinguished portraitists of his era British People
British Artists
British Artists & Painters
Male Artists & Painters
Taurus Artists & Painters
Childhood & Early Life
Thomas Gainsborough was born on May 14, 1727 as the youngest son of John Gainsborough, a weaver in Suffolk. He had eight siblings. His mother was artistically inclined and loved to paint flowers.
He displayed a penchant for painting from a young age and was encouraged by both his parents in his artistic pursuits. He extensively painted landscapes and also displayed a talent for portraiture.
He wanted to be formally trained in painting and asked his father to send him to London. Impressed by his son’s skills and dedication, his father sent him to study art in London. Initially he trained under engraver Hubert Gravelot who was an important figure in London art circles at the time. Eventually he went to study at an academy in St. Martin's Lane under the prominent painter William Hogarth.
Continue Reading Below
Career
Thomas Gainsborough married young and with the help of the dowry his wife brought, he set up his own studio in the late 1740s. Painting landscapes was his true passion and during the initial years of his career he focused on this genre.
He became known for his brushstrokes and speed of painting. However, he reached a stage when he was not able to earn much through the sales of his landscapes and started painting portraits in order to earn more income.
In spite of being highly skilled, he struggled to find success as a portraitist. He was receiving a lot of commissions, but his clientele included mainly local merchants and squires, and thus he could not earn much as an artist.
He moved with his family to Bath in 1759 and there he was able to attract a fashionable clientele. His career took off and he began to send his works to the Society of Arts exhibition in London (now the Royal Society of Arts) in 1761 and by the end of the decade he was submitting works to the Royal Academy's annual exhibitions. However, he stopped exhibiting his paintings in 1773 due to his deteriorating relationship with the academy.
He moved to London in 1774 and started exhibiting his paintings at the Royal Academy again in 1777. His career reached a new high when King George III took a liking to him and commissioned him to paint portraits of members of the royal family. Even though he could never become the royal painter, he remained a favorite of the king.
In his later years, he again started painting landscapes, though now he kept his style relatively simple. Gainsborough was not known to have engaged many assistants, and his only known assistant was his nephew, Gainsborough Dupont.
Major Works
In his painting ‘Mr and Mrs Andrews’ (c. 1750), he combined a double portrait of a newly-married couple with a landscape view of the English countryside. This combination of two common types of painting—portrait and landscape—was considered unusual in his era. Even today it remains one of his most popular works.
‘The Blue Boy’ (c. 1770) is undoubtedly one of his best known works. The subject of this full-length portrait is believed to be Jonathan Buttall, the son of a wealthy hardware merchant, though his true identity was never verified.
As a portraitist, Thomas Gainsborough was known for his ability to depict the unique individuality of his subjects. In his painting ‘Girl with Pigs’ (1781-2), he painted a young girl, intently watching her pigs eat. This painting was considered to be one of his finest by the acclaimed artist Sir Joshua Reynolds.
Personal Life & Legacy
He married Margaret Burr in 1746. She was the illegitimate daughter of the Duke of Beaufort. The couple had two daughters, Mary and Margaret, who often became the subjects of their father’s paintings.
Thomas Gainsborough became ill with cancer towards the end of his life and died on 2 August 1788, at the age of 61.

See the events in life of Thomas Gainsborough in Chronological Order 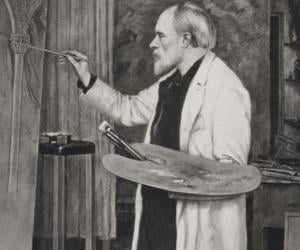