A versatile English musician, Thom Yorke is a multifaceted artist best known as the vocalist, songwriter and pianist of the rock band Radiohead. Apart from playing the piano, he is also an expert at playing the drum and the bass guitar. Considered one of the most influential singers of the contemporary era, Yorke’s debut solo album, ‘The Eraser’ received immense critical and commercial success, which catapulted him to instant stardom. As the lead singer of ‘Atoms of Peace’, he was recognised as one of the most influential figures of music and was included in Rolling Stone's "100 Greatest Artists of All Time". Yorke was born with a visual impairment and underwent almost five surgeries, which restored his eyesight. These ailments did not deter his spirits and soon enough, he transformed himself into a cult figure and a youth icon. His popularity and fame also brought out the environmentalist and humanitarian in him as he has spoken about various social and contemporary issues. British People
Rock Singers
Lyricists & Songwriters
British Men
University Of Exeter
Childhood & Early Life
Thom Yorke was born in Wellingborough, Northamptonshire, England. He started playing the guitar at the age of seven and formed his first band at the age of ten.
Born with a visual impairment, Yorke had to undergo several surgeries as a youngster and was often made fun of by his classmates, due to his surgical scars.
He attended the Abington School for Boys along with fellow guitarist, Ed O’Brien and bassist, Colin Greenwood. They later formed the band, ‘Friday’. 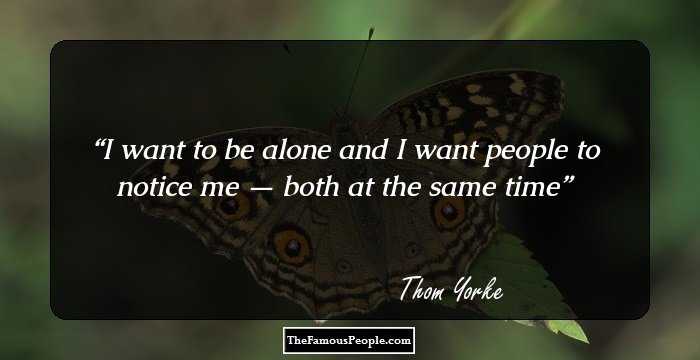 Quotes: Me, Time, Alone, I
Continue Reading Below
Career
He was the lead singer and song writer of the band and they included Phil Selway as the drummer and Jonny as the harmonica player, keyboardist and guitarist. However, the band temporarily split, till they reunited to record a series of demo tapes.
One of these tapes, ‘Manic Hedgehog’, drew the attention of a recording company, EMI, who signed the group in 1991 for a ‘six album deal’. The following year, the band was renamed ‘Radiohead.
In 1992, EMI released the debut EP of Radiohead and "Creep", the album’s single became Radiohead's first charting hit on the Billboard countdown.
In 1995, their second album, ‘The Bends’, was released and earned them great critical acclaim and success. The album was ranked No.110 on the list of "500 Greatest Albums of All-Time" list.
They released their next album, ‘OK Computer’ in 1997, which catapulted them to international stardom. The album climbed to the No.1 position on the UK album charts, which put more pressure on the band to come up with a follow-up hit.
Their 2003 album, ‘Hail to the Thief’, reflected the apocalyptic post-9/11 world. After their contract with EMI expired, the band took a decision which allowed their fans to decide the amount they wanted to pay for the copy of the 2007 album, ‘Rainbows’.
In 2009, he worked on a parallel project with Flea, the bassist of Red Hot Chili Peppers and long-time Radiohead producer, Nigel Godrich. 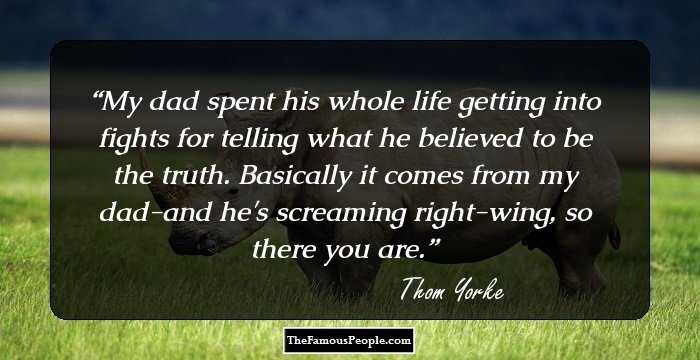 Quotes: You, Life
Major works
‘The Eraser’, his debut solo album, was released on 10th July, 2006. The album climbed to the #3 position on the UK Albums Chart and was ranked #2 on the Billboard 200 in the United States, selling over 90,000 copies in its first week. It was nominated for both the Mercury Music Prize as well as the Grammy Award for Best Alternative Music Album in 2007.
Awards & Achievements
Rolling Stone ranked Yorke No. 66 on its list of "100 Greatest Singers of All Time" and was referred to as ‘one of the most influential singers of his generation."
One of the albums of Radiohead, ‘OK Computer’ was ranked 17th in Classic Rock Magazine’s list of the ’30 greatest concept albums of all time’. 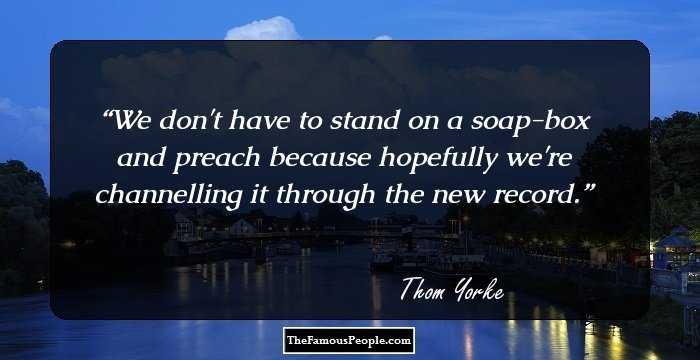 Personal Life & Legacy
Currently, he lives in Oxfordshire, near his hometown, with his long-time partner Rachel Owen, whom he met while studying at Exeter University. They have two children, Noah and Agnes.
An ardent environmentalist, he supported the Friends of the Earth's climate change campaign, "The Big Ask."
Trivia
One of the members of the famous band, ‘Radiohead’, he featured in Animal Aid's cutting-edge film, ‘Eat This!’ which takes us into the reality behind the livestock industry and the ethics of eating meat.

See the events in life of Thom Yorke in Chronological Order 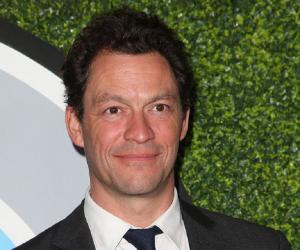