Thomas Becket was the Archbishop of Canterbury from 1162 until his assassination in 1170 and was also popular as Saint Thomas of Canterbury or Thomas of London. He was the son of Gilbert and Matilda Becket. Over the course of history his father’s exact profession has somewhere been lost but it is believed that they were financially well off and Thomas received the best of education available. After school, he attended the University of Paris for a year and in the same time his father suffered a financial setback. To pay for his expenses he did secretarial work in a couple of offices before joining the household of Theobald, the then Archbishop of Canterbury. With his rigorous work ethic and remarkable diplomatic skills he won over the archbishop and became his most trusted employee. Theobald sent him to the University of Bologna to study canon law and when he returned, bestowed upon him several offices including that of deacon and later on the office of archdeacon. His life moved up a notch when he met King Henry II and became his Chancellor; the two developed a meaningful working relationship based on mutual admiration and respect. Trouble began brewing when the king elevated Thomas to the status of Archbishop, which ultimately led to the latter’s controversial assassination Jerome
DID WE MISS SOMEONE?
CLICK HERE AND TELL US
WE'LL MAKE SURE
THEY'RE HERE A.S.A.P
Quick Facts

Also Known As: Saint Thomas of Canterbury, Thomas of London

British People
British Men
British Saints
British Spiritual & Religious Leaders
Sagittarius Men
Childhood & Early Life
Thomas Becket was born in London, England on St. Thomas Day, i.e. December 21, 1118. His father was Gilbert Becket and his mother was Matilda. He also had a sister named Mary.
At the age of 10, he became a student of Merton Priory and then of a grammar school. For further education he went to the University of Paris.
His mother passed away while he was in Paris and his father suffered a financial crisis. These developments meant Thomas Becket had to fend for himself and eventually he became a clerk in the sheriff’s court.
Later, he did secretarial work for Sir Richer de l’Aigle and Osbert Huitdeniers, the Justiciar of London. In all the offices he had held so far, he showed great ability and spirit. 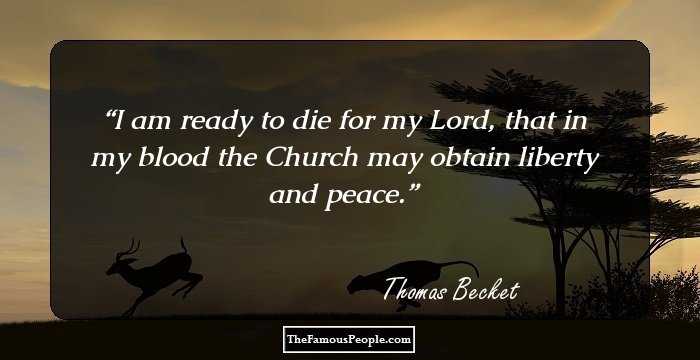 The Hottest Male Celebrities With The Best Abs
Later Life
In 1141 Thomas Becket met Theobald, then Archbishop of Canterbury and started working for him. Theobald was impressed by the young man's intelligence and diplomatic skills and he sent Thomas to study canon law in Paris for a year.
After returning he became the provost of Beverley, and canon at Lincoln and St. Paul's Cathedrals. He was made the deacon in 1154 and eventually the archdeacon of Canterbury.
With the death of King Stephan of England there were several claimants to the throne lay open to claim and several clamwere made. With his diplomacy Thomas got Henry of Anjou crowned as the King Henry II in 1154 and in return was rewarded with Chancellorship under the new king.
The newly crowned King Henry II coveted more power and believed controlling the Church would do that. He was presented with the perfect opportunity when Archbishop Theobald passed away in 1161 and he wanted Thomas Becket to hold the ecclesial office.
Becket had a totally different viewpoint to the king’s proposal as being a chancellor blessed him with considerable power and influence already. He believed that if ordained, the king would ask him to perform tasks that might not uphold the sanctity of the archbishop’s office and he refused.
In spite of Becket’s refusal, the wish of the king presided. Thomas Becket was ordained as a priest by Walter, bishop of Rochester, and anointed as the Archbishop by the bishop of Winchester in 1162.
The king's ploy backfired and he was offended as Becket, upon being appointed the archbishop, became a man of the Church by adopting the papacy and canon law, and resigned from his chancellorship. The king, after finding no way to reason with Thomas Becket, demanded his resignation from archdeaconry.
In 1163 the king called the other bishops for a council in Westminster to try and incite them against the Archbishop. He presented them with his grandfather's customs (Constitutions of Clarendon) which defined the rights of the king over the Church and with enough pressure the bishops accepted the terms.
With all the bishops on his side, the king believed winning over Becket might be easy but he refused yet again at the Clarendon Palace. With more pressure from the king and a word of caution from his brethren Becket finally yielded but refused to sign any agreement based on it.
Continue Reading Below
In 1164 the king summoned him to a trial at Northampton Castle on the charges of misusing his funds. The bishops and barons found him guilty, but Becket retorted that he could only be judged by the Pope.
Becket left Northampton under a disguise and fled abroad. He informed the Pope of his decision to resign, but the Pope didn’t accept it. The Pope appointed him as the Cistercian Abbot at Pontigny and could do nothing more as he himself was a refugee.
King Louis of France too was dragged into the quarrel between King Henry II and Becket, and he met Henry in 1169 for a conference at Montmirail and pleaded Becket’s case.
In 1170, Roger de Pont L’Evegue (Archbishop of York) accompanied by two other bishops crowned Henry’s son, which violated the coronation privileges of Canterbury. Becket excommunicated the three clergymen instantly. The same year, Becket returned to England in spite of the risk to his life.
Angry over the excommunication of the bishops who crowned his son, King Henry II erupted into a fit of rage. The king uttered a statement which was taken as a royal command by four knights—Reginald Fitzurse, Hugh de Morville, William de Tracy and Richard le Breton—to kill Becket, and they headed off to Canterbury and assassinated him. 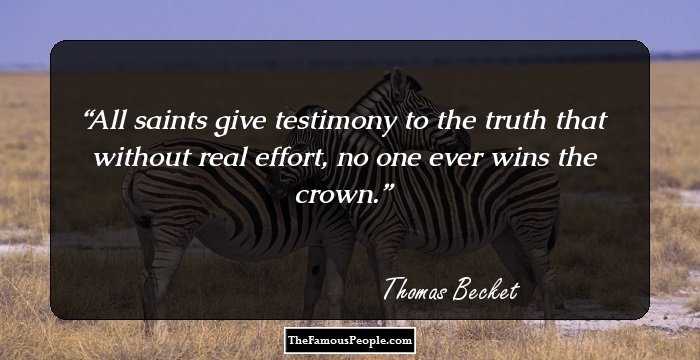 Quotes By Thomas Becket | Quote Of The Day | Top 100 Quotes

See the events in life of Thomas Becket in Chronological Order