St. David was a 6th century Welsh bishop considered to be the patron saint of Wales. In spite of the fact that his date of birth remains disputed till date, a relatively large amount of information regarding his life and time is available. Much of what is known about St. David today can be found in the ‘Buchedd Dewi’, a hagiography written by Rhygyfarch in the late 11th century. Even though modern historians are skeptical of some of the claims made in the book, its author Rhygyfarch stated that it was based on documents found in the cathedral archives. He is believed to have been born to a lady of noble Irish birth living in Dyfed. His mother was a pious woman, who had shunned the worldly life in favor of a religious one. However, her beauty attracted the attention of a king who raped and impregnated her. According to traditional tales, St. David started performing miracles while still in his mother’s womb. He entered the world in the middle of a violent storm and was baptized at a young age. He grew up to be a pious and religious man and was ordained as a priest. He was active in missionary work and founded a number of monasteries. He was also famous for the extremely austere life he led and encouraged others to lead 163
DID WE MISS SOMEONE?
CLICK HERE AND TELL US
WE'LL MAKE SURE
THEY'RE HERE A.S.A.P
Quick Facts

Welsh People
Spiritual & Religious Leaders
Welsh Men
Childhood & Early Life
Several details regarding the birth and childhood of St. David are obscure. He was born to Lady Non, the daughter of Lord Cynyr Ceinfarfog of Caer Goch. Non, a highly religious woman, was a nun at Ty Gwyn near Whitesands Bay. She was very beautiful and attracted the attention of Prince Sandde of Ceredigion who forced himself upon her. This resulted in her pregnancy with a son who would later become St. David.
Miracles started happening while Non was pregnant, leading people to believe that she carried a great soul in her womb. She gave birth in the middle of a violent storm, and her baby boy was born in a sea of brilliant light. The year of his birth is uncertain; he is believed to have been born between 462 and 512. It is said that St. David's birth had been foretold 30 years before by an angel to St. Patrick.
He was raised by his devoted mother and was baptized at a young age by his maternal cousin, St. Eilfyw. He received his early education from a monastery called Hen Vynyw, or Henfynyw, in Cardigan. There he learnt the alphabet and the psalms, and it is also suggested that he studied mathematics, astronomy, and music.
He was ordained as a priest once he grew up into a young man and he travelled to the island of Wincdi-Lantquendi (possibly Whitland) in order to study the Holy Scripture under St. Paulinus of Wales. There too, he displayed a miracle when he cured Paulinus of his blindness and restored his sight with a gentle touch. He studied there for around 10 years and proved himself to be a brilliant student. He is also said to have studied under St. Illtud at Llanilltud Fawr (Llantwit Major) around this time.
Continue Reading Below
You May Like

The Hottest Male Celebrities With The Best Abs
Later Life
After completing his religious studies, St. David started travelling all over the country, evangelising as he went. He is said to have founded around 12 monasteries though there is no proof to verify the exact number of monasteries he actually founded. It is believed that the possible genuine foundations included Glasgwm (Elfael), Colfa (Elfael), Llangyfelach (Gwyr), Llanarthne (Ystrad Tywi) and Betws (Ystrad Tywi).
During his travels he also visited the court of King Proprius of Ergyng - probably King Peibio Clafrog. The king suffered from blindness, and using his miraculous healing powers St. David restored the king’s sight.
After returning from his travels, he along with his disciples, Aeddan, Teilo and Ysfael founded the monastery of Mynyw (St. Davids). St. David and his monks followed a very strict Monastic Rule which prescribed a life of severe austerity.
The monks had to pull the plough themselves without using draught animals, and were required to abstain from eating meat and drinking wine or beer. Their diet primarily consisted of bread and water, and speech was also severely restricted. They were instructed to pray continuously at all times and the entry of new monks into the monastery also entailed a long and tedious procedure.
The founding of the monastery of Mynyw displeased an Irish chieftain named Bwya, living at nearby Castell Penlan. Bwya’s wife sent her maid-servants to seduce the monks in order to distract them from their holy purpose. However, the plan backfired and misfortune befell the Irish couple and they suffered due to their own evil intentions.
St. David made a pilgrimage to Jerusalem with two companions SS. Teilo and Padarn. The trio was consecrated bishops by the patriarch at Jerusalem. His trip to the holy city is said to have been triggered by a vision.
Major Works
St. David was known to have performed several miracles. He could cure blindness and even bring back the dead to life. However, his greatest miracle happened when he was preaching in the middle of a large crowd at the Synod of Brefi. A small hill miraculously rose under him so that his preaching could reach everyone around him.
Personal Life & Legacy
St. David lived a very long life; some sources claim he lived for over 100 years. He is believed to have died on 1 March, a Tuesday. It is generally accepted that he died in 589 as 1 March fell on a Tuesday that year. The monastery is said to have been "filled with angels as Christ received his soul." He was buried at St David's Cathedral at St David's, Pembrokeshire.
St. David was canonized by Pope Callistus II in the year 1120.
You May Like

See the events in life of Saint David in Chronological Order 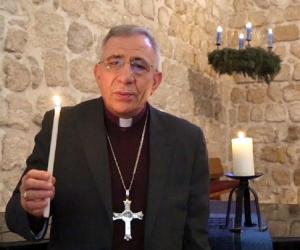