Tamera Mowry is an American actress and model who rose to prominence for her role as Tamera Campbell in the super hit ABC/WB sitcom ‘Sister, Sister’, alongside her twin sister, Tia Mowry. Blessed with an inherent talent for acting, Tamera and Tia knew from the beginning that they were destined to be actors. Convinced of their artistic skills, they soon influenced their parents to shift to Los Angeles, California, from their homeland Germany. Entering the entertainment world on a humble note with a few guest roles and as participants of talent shows, the girls hit it big with the series ‘Sister, Sister’ and since then, there is no stopping the duo. Tamera’s next major breakthrough came in the medical drama ‘Strong Medicine’ wherein she capped the role of Dr. Kayla Thornton. Following this, she featured in ‘Roommates’, ‘Things We Do for Love’ and ‘Tia & Tamera’, the last one being a super hit reality show covering the day-to-day lives of the twin sisters. Currently, Tamera is one of the hosts of the talk show ‘The Real’ which first premiered on July 15, 2013. Apart from her artistic talents, she is a gifted singer as well. The twins have showcased their singing abilities several times. They sang the covers of ‘You Can't Hurry Love’, ‘Amazing Grace’ and ‘I'm Going Down’ and also sang the theme song of ‘Sister, Sister’ during season five and six. 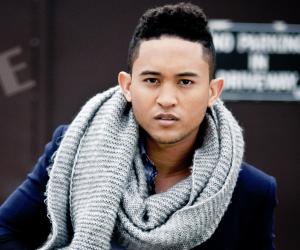 Zoë Kravitz
Actresses #1089
Film & Theater Personalities #2598
DID WE MISS SOMEONE?
CLICK HERE AND TELL US
WE'LL MAKE SURE
THEY'RE HERE A.S.A.P
Quick Facts

American People
Pepperdine University
Cancer Actresses
American Actresses
Actresses Who Are In Their 40s
Childhood & Early Life
Tamera Darvette Mowry was born on July 6, 1978, in Gelnhausen, West Germany, to parents of mixed heritage. Her mother Darlene Renee Mowry (née Flowers) is of Afro-Bahamian descent while her father Timothy John Mowry is of English descent. An ex-serviceman in the army, her father later served as a custody officer for the City of Glendale Police Department. Her mother serves as her children’s manager.
Tamera Mowry has three siblings: a twin sister Tia who is younger to her by two minutes, and two younger brothers Tahj and Tavior. The twin sisters became born-again Christians when they were eight years old.
Following her elementary studies she entered Pepperdine University to study psychology.
Continue Reading Below
You May Like

Who Is The Most Popular BTS Member?
Career
Blessed with an inherent talent for acting and anxious to make a mark in the world of drama, the twin sisters convinced their parents to move to California so as to pursue a full-time professional career in acting. The parents gave in to their wishes and the family moved to Los Angeles in 1990.
Tamera and Tia started their career by entering pageants and talent shows. Soon, they found themselves small roles in television series. Tamera first graced the screen for ‘Flesh n Blood’ as Penelope. She next featured in ‘True Colors’ before sharing screen space with her twin sister for her brother’s show ‘Full House.’
Tamera’s television breakthrough came with the show, ‘Sister, Sister’, in which she starred with her twin sister Tia. The series was developed after a producer spotted them on the set of ‘Full House’, a show on which their brother made regular appearances. ‘Sister, Sister’ was initially on ABC but was cancelled by the network after two years and picked up by The WB, where it ran for another four years.
While working in ‘Sister, Sister’ Tamera took up multiple guest roles for several television series, including ‘Are You Afraid of the Dark?’ and ‘Smart Guy.’ She did voice roles for ‘The Adventures of Hyperman’ and ‘Detention.’ Additionally, she featured in the TV film ‘Something to Sing About’ and ‘Seventeen Again’, both of which released in 2000.
In 2001, she bagged a role in the interstitial series ‘Express Yourself’ along with her sister Tia. The show ran until 2005. Meanwhile, in 2004, she bagged the lead role in the medical drama ‘Strong Medicine’ as Dr. Kayla Thornton. The show was a hit and ran for two years until 2006.
In 2005, she featured in the Disney Channel original TV film ‘Twitches’ and its spin-off ‘Twitches Too.’ In it, she once again shared screen space with her sister Tia. She also gave voice for the tele-series ‘Family Guy’.
The actress bagged a lead role as Hope Daniels in ‘Roommates.’ She was also seen in ‘Things We Do for Love’ and a reality series, ‘Tia & Tamera’ that captured the day-to-day lives of the twin sisters. Tia was pregnant at that time while Tamera was planning her wedding. The show aired on the Style Network and ran for three seasons.
She then did a couple of TV films including ‘Double Wedding’, ‘Rebounding Vanessa’ and ‘Christmas Angel.’
Currently, Tamera Mowry is one of the hosts of the talk show ‘The Real’ with former Disney channel star Adrienne Bailon, Jeanne Mai and Loni Love. The show premiered on July 15, 2013.
Continue Reading Below
Apart from acting, Tamera along with her sister Tia have established a career in singing as well. The twin sisters were in a singing group in the early 1990s called Voices. The group debuted with their first single ‘Yeah, ‘Yeah, Yeah!’ in 1992 which charted at the No 72 on the Billboard Hot 100.
Major Works
A highlight of Tamera Mowry’s career was when she earned herself a lead role in the ABC/WB sitcom ‘Sister, Sister’, along with her sister Tia. It ran for six years and was a super hit. Tamera’s artistic brilliance and on-screen charisma was lauded as she mastered her role as Tamera Campbell.
Tamera’s career took a further leap with the medical drama ‘Strong Medicine’. With a focus on feminist politics, health issues and class conflict, the series was a high rated original drama. It aired on the Lifetime network from 2000 to 2006.Tamera did full justice to her role of Dr. Kayla Thornton, a young medical prodigy.
Awards & Achievements
Tamera Mowry won the Image Award for Outstanding Actress in a Comedy Series for ‘Sister, Sister’ twice (in 1999 and 2000). She shared the award with her sister Tia.
She was named Nickelodeon Kids' Choice Awards Favorite Television Actress for ‘Sister, Sister’ consecutively for three years, from 1995 to 1997. She shared the honor with Tia.
She received the Nickelodeon Kids' Choice Hall of Fame Award in 1998.
Personal Life & Legacy
As per her interview in 2013, Tamera lost her virginity at the age of 29. However, she felt guilty later on and promised to remain chaste until her marriage.
Tamera dated Fox News Correspondent Adam Housley for almost six years before walking down the aisle with him on May 15, 2011, in California's Napa Valley. The couple welcomed their first child, a son Aden John Tanner Housley, on November 12, 2012 and later a daughter Ariah Talea Housley on July 1, 2015.
She has a Shih Tzu named Milano.

See the events in life of Tamera Mowry in Chronological Order