A computer wizard, Steve Wozniak is the man who through his invention of Apple I and Apple II computers magnified the microcomputer revolution in the world. Born in a booming technological centre, since young, Steve Wozniak showed traits of making it big in the world of electronics. He condemned formal education and displayed an affinity for creating homemade devices from scratch. No sooner his passion turned into a full time profession as he joined hands with yet another electronic geek wizard of his generation, Steve Jobs. Together, the duo re-wrote history in the emerging world of personal computers. They co-founded Apple Computers, which has become one of the most treasured and highly valued companies in the world. While Steve Wozniak looked after the engineering bit in the company, Jobs filled for the marketing space. Wozniak single-handedly invented both the Apple I and Apple II computers in the late 1970s. He has four patents to his credit and has masterminded several other technological advancements including the first programmable universal remote control, a wireless GPS technology and so on. A legendary man in his own right, Wozniak has been bestowed with numerous awards and decorations for his impressive and outstanding contribution in the field of science and technology. Reid Hoffman
DID WE MISS SOMEONE?
CLICK HERE AND TELL US
WE'LL MAKE SURE
THEY'RE HERE A.S.A.P
Quick Facts

American People
Computer Scientists
Electronics Engineers
Inventors & Discoverers
American Men
Childhood & Early Life
Steve Wozniak was born as Stephen Gary Wozniak in San Jose, California, to Margaret Elaine (Kern) and Jacob Francis "Jerry" Wozniak. He belongs to a mixed Polish, German, Irish and English ancestry.
Growing up in a booming technological centre did more good than harm to this technically-inclined kid who since young, found his true calling in electronics. As a kid, he indulged in making homemade devices like voltmeter, ham radio, calculator and games.
Despite being extremely bright and intelligent, routine schooling and rote learning bored him. Flunking from the University of Colorado, he gained admission at the University of California. 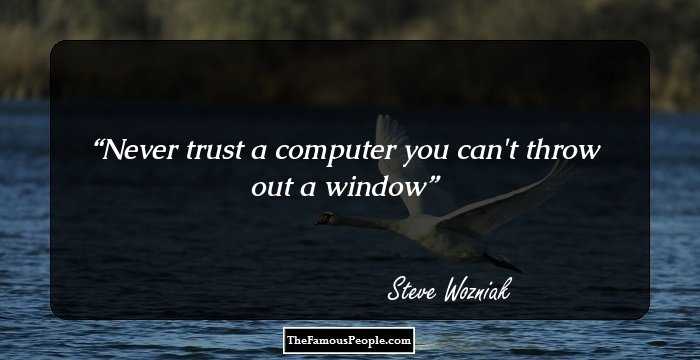 Quotes: You, Never
Continue Reading Below
Career
It was through a common friend that in 1971, he met Steve Jobs, who like him, hated school and shared a passion and obsession for electronics. He shared a great bond with Jobs, as both of them were fuelled by the same passion.
The duo became friends while working together on a mainframe computer at Hewlett-Packard (HP). It was around this time Wozniak dropped out of the University of California.
Meanwhile, the world of electronics witnessed an upsurge as the demand for personal computers started ticking off. Much of it was due to the development of microprocessor.
Since he could not afford a computer on his own, he decided to build one. What eventually followed was the first generation of Apple computer, titled Apple I. Interestingly; he designed the hardware, circuit board designs, and operating system singlehandedly.
Performance wise, the computer built by Wozniak could perform greater operations than the Altair present in the market. In the history of computing, Apple I became the first home computer to display a character on a TV screen.
He along with Jobs introduced the Apple I computer to the Palo Alto-based Homebrew Computer Club, which essentially comprised of electronics hobbyists interested in computing
Jobs took the charge of marketing the device while Wozniak looked to further improve and augment it. What made Apple I computer far superior from the market counterparts was the fact that it had an easy-to-achieve video capability that others lacked.
They sold some of their personal possessions and the duo started selling fully assembled printed circuit boards. No sooner they marketed and sold monitors, electronic devices, and computer games. It was through this that they raised USD $1,300.
On April 1, 1976, he together with Jobs founded Apple Computers. Meanwhile, he resigned from his duty from Hewlett Packard and took up the profile of the Vice President at Apple. He was in charge of the research and development wing.
Continue Reading Below
Unlike Altair 8800, Apple I computer was essentially for entertainment purpose. It did not have provision for expansion card and thus unlike Altair 8800, could not be attached to a computer terminal and be programmed in BASIC.
After the success of the Apple I computer, he designed the second generation of Apple computers titled Apple II. Much unlike its predecessor, the Apple II computer had the ability to display computer graphics and had built-in BASIC programming language. Furthermore, it had 8 expansion slots.
The Apple II computer went on to become one of the first highly successful mass-produced personal computers.
With time, the popularity of Apple started soaring sky high. Its expansion was inevitable and so was the inclusion of other engineers. In 1980 the company went public with its stock value standing at US $ 117 million.
In 1981, he narrowly escaped death as he met with an unfortunate accident as he was piloting a plane on a runway which crashed. It took him two years to fully recover from the incident. It was during this time that he sponsored two US Festivals to celebrate evolving technologies
When he resumed his duties at Apple, he took up from where he left as the engineer and motivational factor for Apple workforce. The company had expanded greatly and its stock value reached US $ 985 million.
His full-time employment with Apple duly ended when he retired from the company on February 6, 1987. Nevertheless, till date, he remains as an employee of Apple and receives a stipend, estimated to be USD$120,000 per year. He is also an Apple shareholder.
After his retirement from Apple, he founded a new venture called CL 9. The company brought to the market the first-ever programmable universal remote control.
Ever since long, he wanted to take up a teaching position at an elementary school because of the important role that teachers plays in student’s lives. It was post retiring from Apple that he realized his dream by teaching computer to students from the fifth to ninth grade.
Continue Reading Below
In 2001, he founded WOZ or Wheels of Zeus to create wireless GPS so as to help people find everyday things easily and without any hassle.
In 2002, he joined the Board of Directors of Ripcord Networks Inc and Danger Inc.
WOZ terminated its operation in 2006. Following this, he, along with Ellen Hancock and Gil Amelio founded Acquicor Technology, a holding company for acquiring technology companies and developing them.
From being an engineer, he tried his hand at writing and turned to be an author, with his first publication, an autobiography titled ‘iWoz: From Computer Geek to Cult Icon: How I Invented the Personal Computer, Co-Founded Apple, and Had Fun Doing It’. The book was co-authored by writer Gina Smith
In 2009, he was employed by Fusion-io, a data storage and server company, in Salt Lake City, Utah, as their chief scientist. Two years later, he was a part of the management team of the company top celebrate the first day of trading on the NYSE by ringing The Opening Bell. He worked with Fusion-io till 2014.
In 2014, he joined Primary Data as chief scientist. Primary Data is a company founded by former Fusion-io executives, such as Lance Smith, David Flynn and Rick White. 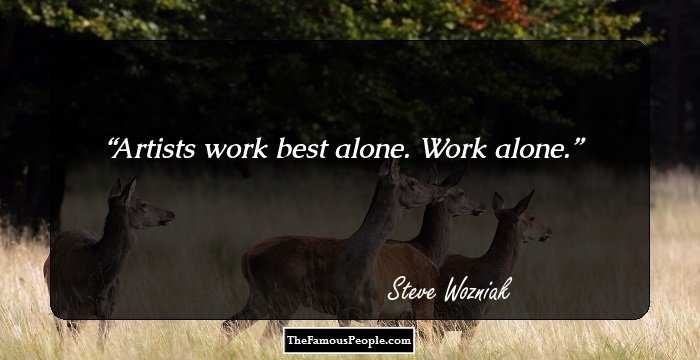 Quotes: Alone
Major Works
He is the co-founder of Apple Computers Inc and was solely responsible for the creation of Apple I and Apple II computers. He looked after the engineering bit in the company and became the sole inventor of the four patents, ‘Microcomputer for use with video display’, ‘Controller for magnetic disc, recorder, or the like’, ‘Apparatus for digitally controlling PAL color display’ and ‘Digitally-controlled color signal generation means for use with display’.
Awards & Achievements
In 1979, he was conferred with the ACM Grace Murray Hopper Award.
Continue Reading Below
In 1985, he was the proud recipient of the National Medal of Technology along with Steve Jobs.
In 1989, he was awarded an honorary Doctor of Engineering degree from the University of Colorado at Boulder.
In 1997, he was named a Fellow of the Computer History Museum.
In 2000, he was inducted into the National Inventors Hall of Fame,
He received the 7th Annual Heinz Award for Technology, the Economy and Employment in 2001.
In 2011, he was presented Isaac Asimov Science Award by the American Humanist Association
He is the proud recipient of honorary doctorate degrees from various universities including Kettering University, North Carolina State University, Nova Southeastern University, Michigan State University, Santa Clara University, University Camilo Jose Cela in Madrid, Universidad Nacional de Ingenieria in Lima, Concordia University in Montreal Canada and ESPOL University in Ecuador:
In 2011, he was presented with the Global Award of the President of Armenia for Outstanding Contribution to Humanity Through IT
In 2014, he was awarded the 66th Hoover Medal.
In 2017, UK-based company Richtopia, listed Wozniak at #18 in the list of 200 Most Influential Philanthropists and Social Entrepreneurs. 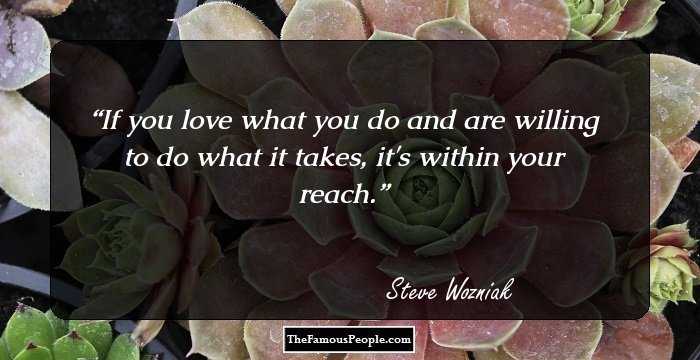 Quotes: You, Love
Personal Life & Legacy
He lives in Los Gatos, California.
Currently, he is married to Janet Hill. He has fathered three children from his previous marriage.
He is an agnostic by belief.
He was a key contributor and benefactor to the Children's Discovery Museum of San Jose. To mark the outstanding contribution made by him, the street in front of the museum has been named Woz Way in his honor.
Trivia
This co-founder of the Apple Computer Inc earned his bachelor's degree in computer science and electrical engineering in 1986 after retiring from Apple.
Recommended Lists:
Business People #18
Scientists #15
Engineers #11
Inventors & Discoverers #78

Quotes By Steve Wozniak | Quote Of The Day | Top 100 Quotes

See the events in life of Steve Wozniak in Chronological Order