Kevin Systrom is the co-founder of the latest social networking buzz ‘Instagram’. Like most of the children, he too was much interested in video games and even developed different levels while playing the game ‘Doom 2’. Eventually, he cultivated an affinity towards programming and even as a student, he progressed as a programmer. He was capable enough to be selected for the ‘Mayfield Fellows Program’ and this enhanced his skills related to technology. He did a bachelor’s degree in management science and engineering, and embarked on a career which was to impact the social networking activities in an enormous way. He worked with the tech-giant ‘Google’ and then shifted to a startup company called ‘Nextstop’. While working at Nextstop he came up with the idea of developing the new big thing in the world of internet. Initially, he and his associate Mike created an application called ‘Burbn’, but that turned out to be too complicated and difficult to operate for the users. Thus the duo became instrumental in ushering the latest social networking sensation called ‘Instagram’. Instagram has emerged as a connotative term and needs no introduction as such. Read on to know more about the life and works of this renowned internet entrepreneur Zoe Quinn
IT & Software Entrepreneurs #8
Computer Engineers #1
Business People #114
Continue Reading Below
DID WE MISS SOMEONE?
CLICK HERE AND TELL US
WE'LL MAKE SURE
THEY'RE HERE A.S.A.P
Quick Facts

American People
American Men
Stanford University
Tall Celebrities
Tall Male Celebrities
Childhood & Early Life
He was born to Diane (Pels) and Douglas Systrom to 30th December, 1983, in Holliston, Massachusetts.
He received education from the ‘Middlesex School’ located in Concord, Massachusetts. During his school days he learnt about computer programming. As a child, he played the video game called ‘Doom 2’, which further developed his interest in programming.
He pursued Bachelor of Science degree in management science and engineering, from the ‘Stanford University’. While at the university, he was associated with the ‘Sigma Nu fraternity’.
He was one among the twelve students selected by the university authorities to take part in the renowned ‘Mayfield Fellows Program’ where the students are provided with detailed knowledge and training in high-tech entrepreneurship.
His participation in the fellowship program provided him an opportunity to join the company called ‘Odeo’ as an intern. ‘Odeo’ is the same company which developed the social networking site ‘Twitter’.
Continue Reading Below
You May Like

The Hottest Male Celebrities With The Best Abs
Career
In 2006, he completed his graduation and got employed at the internet service and technology giant ‘Google’ as the associate product marketing manager and managed functions of Google Calendar, Gmail, Spreadsheets, Docs and various other products of the company.
During his two years of employment at ‘Google’, he initially worked with products such as Google Reader and Gmail. The following year, he joined the ‘Corporate Development Team’ of the company.
A few individuals who had worked with ‘Google’ such as Adrian Graham, Charles Lin and Carl Sjogreen collaborated to form a new venture called ‘Nextstop’. Kevin left ‘Google’ and became an associate at the new venture.
This startup was developed to recommend destinations to people and help them explore the places with the help of ‘Nextstop’. This company was overtaken by the social networking site ‘Facebook’ on 25th September. 2010.
This exceptional programmer conceived that the location check-ins can be amalgamated with prevalent social games, and on this thought he prepared a prototype. He shared his idea with the founders of the capital investment companies ‘Andreessen Horowitz’ and ‘Baseline Ventures’.
His meeting with those founders seemed fruitful and he left the ‘Nextstop’ company to develop his idea further. The investment companies ‘Andreessen Horowitz’ and ‘Baseline Ventures’ provided him with an initial funding of $500,000. Eventually, the ‘Burbn’ company was developed by Systrom and Mike Kriegerin in San Francisco.
‘Burbn’ had many features such as posting pictures, sharing locations, create future check-ins, and even accumulate points based on their activities on ‘Burbn’. However, the founders soon realised that the application with its enormous features was not user friendly.
The developers of ‘Burbn’ decided to change the features of the application and make it more user friendly by concentrating on only one feature, that is, sharing and posting of pictures. Thus, ushered in the new application called ‘Instagram’ and within one month of its launch the application had around 1 million users.
Instagram, which is a phone based application, derived its name from the words Instant’ and ‘telegram’. The application is integrated to the device’s camera and gallery and one can edit their images with the help of in-built templates and settings and post it on various other social media platforms including Facebook, Twitter etc.
The popularity of the application was so immense that in April 2012, the social networking site ‘Facebook’ acquired the company for $1 billion. Kevin, apparently earned $400 million owing to his shares in ‘Instagram’. Kevin holds the office of the CEO of ‘Instagram’ while Krieger is the technical head of the company.
Kevin is bestowed with the handling of the nitty-gritty of the operations, and the strategic development of the process. Although, ‘Facebook’ has acquired ‘Instagram’, Kevin still has a say in its operations and functioning.
Major Works
He is the co-founder and the CEO of the popular application called ‘Instagram’, and is credited with designing the application. This celebrated programmer is involved in the day-to-day development of the photo-sharing platform. According to recent surveys and estimates, with more than 300 million users, ‘Instagram’ is valued at $33 billion as of 2014.
Awards & Achievements
In 2012, Kevin was awarded with the ‘Founder of the Year’ at the ‘6th Annual Crunchies Awards’.
Kevin shared the ‘Webby Breakout Award’ with the co-founder of ‘Instagram’ in the year 2012.
He has been a recipient of the ‘CFDA Social Media Award’ in 2015.
Personal Life & Legacy
This pioneering programmer is reported to be in a relationship with Nicole Schuetz, who is the founder of the ‘Sutro Energy Group’.
Recommended Lists:
Engineers #20
You May Like

See the events in life of Kevin Systrom in Chronological Order 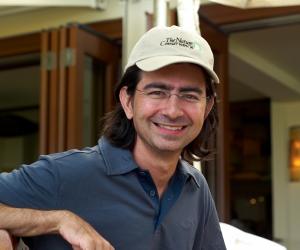