Advanced Search
Christopher Poole is an American entrepreneur and internet prodigy presently working with Google. He is most famous as founder and former administrator of the English-language imageboard website ‘4chan,’ and as founder of the website Canvas Networks. He started ‘4chan’ with this pseudonym, ‘moot,’ as the screen name. Presently owned by Hiroyuki Nishimura, the site reputed as ‘meme factory’ was called "the ground zero of Western web culture." The now defunct imageboard allowed sharing and commenting on media both anonymously and non-anonymously. It also allowed remixing of images and also incorporating music to animated GIFs. He spoke at conferences at Massachusetts Institute of Technology and Yale University as moot, and gave evidence as a government witness in the Sarah Palin email hacking trial. He started working for Google in 2016. Steve Wozniak
DID WE MISS SOMEONE?
CLICK HERE AND TELL US
WE'LL MAKE SURE
THEY'RE HERE A.S.A.P
Quick Facts

American People
American Entrepreneurs
American IT & Software Entrepreneurs
Childhood & Early Life
Christopher Poole was born in 1988 in New York City, New York, US. There is no information available on his early life, family background and education.
According to a report in ‘The Washington Post,’ Poole dropped out of the Virginia Commonwealth University after attending a few semesters. The report also mentioned that he was residing with his mother and was seeking a way out to earn money as the owner of ‘4chan’.
Continue Reading Below
Career
Before coming up with ‘4chan,’ he used to participate on ‘Something Awful’ forums quite often. He wanted to develop an American counterpart of the famous imageboard of Japan called ‘Futaba Channel’ (‘2chan), which would also be a place to discuss anime and manga. He launched the imageboard website, ‘4chan,’ on October 1, 2003, when he was just 15 years of age.
While creating ‘4chan,’ he used AltaVista's Babel Fish online translator to translate the source code of the Futaba Channel website from Japanese text to English.
Initially ‘4chan’ had just two boards, namely ‘/a/ – Anime/General’ and ‘/b/ – Anime/Random’ (later renamed as ‘/b/ – Random’) of which the Random board was created first. Eventually, other boards were created with their own specific content and guidelines. The site was called "the ground zero of Western web culture” by Leopoldo Godoy of Brazilian TV Globo in 2008.
In a ‘Time’ magazine open internet poll, he was voted as world's most influential person of 2008. However, as voting was influenced by manual ballot stuffing and automated voting programs, the outcome of such result raised questions even prior to the completion of the poll. Intervention of 4chan looked a possibility as it was discovered that the first letter of the poll’s first 21 candidates put together form a phrase that contain 2 memes of 4chan, "mARBLECAKE. ALSO, THE GAME.”
Renowned by pseudonym ‘moot,’ the real identity of Poole was disclosed in ‘The Wall Street Journal,’ on July 9, 2008. The then book critic and lead technology writer at ‘Time’ magazine, Lev Grossman, also published an interview on that day elucidating the influence of the non-visible administrator ‘moot,’ whom he claimed to identify as Christopher Poole. An article in ‘The Observer’ described him as the most influential web entrepreneur ever.
The real identity of Poole was intentionally kept separate from ‘4chan’ by him before the ‘Wall Street Journal’ and ‘Time’ interviews.
During the Paraflows Symposium’s ‘Urban Hacking’ on September 12, 2009, in Vienna, Austria, Poole talked on the reason of 4chan’s reputation as a ‘Meme Factory.’ The talk later found place in the academic reader ‘Mind and Matter: Comparative Approaches towards Complexity.’
He spoke at the ‘TED2010’ conference on February 10, 2010, in Long Beach, California. That year in April, he stood as a government witness in the Sarah Palin email hacking jury trial, ‘United States of America v. David Kernell.
His 4chan handle is ‘moot.’ The site where users can generally post anonymously almost anything became popular in no time. It features boards dedicated to varied range of topics including anime/manga, sports, politics, literature, and music among others. It’s most popular boards as of 2011 are the /b/ (Random), /s/ (explicit images), /a/ (Anime and Manga) and /v/ (Video games).
Meanwhile, he established the website, ‘Canvas Networks,’ reportedly raising $625,000 in 2010. The site officially opened on January 31, 2011. Backed by Joshua Schachter, Founder Collective, Lerer Hippeau Ventures, Andreessen Horowitz and SV Angel, the imageboard permitted anonymous and non-anonymous sharing and commenting on media. It also allowed remixing of images posted, and addition of music to animated GIFs.
A cease and desist letter was sent by him to an internet startup called ‘Moot.It’ in November 2012.
Although Canvas allowed to post anonymously or using pseudonyms, it’s initial policy of using Facebook Connect as the sole signup mechanism garnered some criticism, particularly from 4chan users that eventually forced it to change this policy.
Poole made an announcement on January 14, 2015 that Canvas was dissolved in December 2014, and the remaining funds were donated to charity. Security breaches faced by the website are held in part for such closure.
Poole stepped down as administrator of ‘4chan’ on January 21, 2015, mentioning stress from controversies as the reason for the move. A final Q&A with the website users applying /qa/ board and YouTube to livestream was hosted by moot on January 23 that year.
He started looking for a buyer for ‘4chan’ and gradually began transferring control of the site to three of its anonymous moderators. On September 21, 2015, he announced that he sold ‘4chan’ to a Japanese internet entrepreneur Hiroyuki Nishimura, but the terms of this acquisition were not disclosed.
He announced on March 7, 2016, that Google has inducted him for a yet-to-be disclosed position. He started working for Google that year.
Personal Life
Although Poole does not like to divulge much about his private life. According to some sources, he is married to television weather anchor Marysol Castro and is blessed with twin sons, Liam and Gavin.

See the events in life of Christopher Poole in Chronological Order 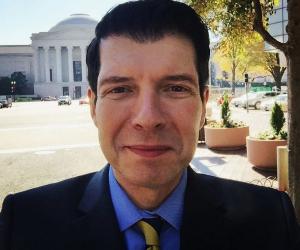