Stephen Douglas Kerr is an American former professional basketball player and coach currently affiliated with the Golden State Warriors. He won the NBA championships five times as a player, three times with the Chicago Bulls and twice with the San Antonio Spurs, as well as three times as the head coach of the Warriors. Born and raised in the Middle East, Kerr attended Palisades Charter High School in Los Angeles, California, where he was a player for the Palisades Dolphins. In college basketball, Kerr played for the Arizona Wildcats. In 1988, he began his professional career with the Phoenix Suns before being traded to the Cleveland Cavaliers. He spent three seasons with them and one season with the Orlando Magic before joining the Chicago Bulls. Kerr played an instrumental role in garnering the Bulls their second championship. In 1999, the Spurs acquired him from the Bulls and subsequently won the championship, making Kerr one of two players to have four successive NBA titles. After a season-long stint with the Portland Trail Blazers, Kerr finished his playing career with the Spurs in 2003. Since retirement, he has been a television analyst, and from 2007 to 2010, the general manager of the Suns. In 2014, he joined the Warriors as the head coach. Jayson Tatum
Basketball Players #53
Sportspersons #456
DID WE MISS SOMEONE?
CLICK HERE AND TELL US
WE'LL MAKE SURE
THEY'RE HERE A.S.A.P
Quick Facts

American People
American Men
Tall Celebrities
Tall Male Celebrities
Male Sportspersons
Childhood & Early Life
Steve Kerr was born on September 27, 1965 in Beirut, Lebanon, as one of the four children of Ann (née Zwicker) and Malcolm H. Kerr. He has a sister named Susan and two brothers named John and Andrew. His family had been living in Beirut since the 1920s.
His paternal grandparents, Stanley and Elsa Kerr, came to the Middle East as volunteers for Near East Relief. His father Malcolm was a faculty member of the American University of Beirut and later became its president.
Kerr spent most of his childhood in Beirut and other parts of Middle East. He was educated at Cairo American College in Egypt and the American Community School in Beirut, Lebanon, before coming to America to attend the Palisades High School (now Palisades Charter High School). While there, he developed a serious interest in basketball and played for the Palisades Dolphins.
When Kerr was 18 years old and attending the University of Arizona as a freshman, his father was assassinated by the Islamic Jihad on the morning of January 18, 1984. The sudden loss of his father deeply affected Kerr. He later observed, “Before my father was killed, my life was impenetrable. Bad things happened to other people.”
Kerr was not a highly sought-after prospect in high school and eventually enrolled at the University of Arizona to pursue a degree in general studies. He secured himself a place in Arizona’s basketball program, Arizona Wildcats. During this period, he truly came into his form as a player and drew the attention of NBA scouts.
Kerr played five seasons for Arizona between 1983 and 1988, appearing in 129 matches and scoring in average 11.2 points per game. He was a member of the USA basketball team that won the gold medal in the FIBA World Championship in Spain in 1986. Two years later, he graduated from Arizona with a Bachelor of General Studies, with emphasis on history, sociology and English. 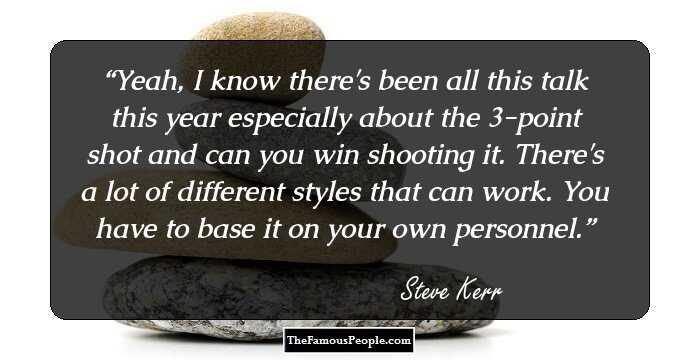 The Sexiest Men Of 2020, Ranked
Professional Career
After becoming available for the 1988 NBA draft, Steve Kerr was picked by the Phoenix Suns in the second round. He made his NBA debut on March 11, 1989, in a game against the Milwaukee Bucks that the Suns eventually lost. In the following season, he was traded to the Cleveland Cavaliers where he went on to spend three seasons before going to the Orlando Magic for the 1992-93 season.
The Chicago Bulls signed him in 1993. In his first two seasons with the Bulls, the team suffered, still feeling the absence of Michael Jordan since his first retirement. They made it to the playoffs but did not manage to secure a championship.
Jordan returned full-time in the 1995–96 season and it drastically changed the team’s performance in the court. They went on to win the NBA championship that year, and in the following two years.
In 1997, at the NBA finals game six against the Utah Jazz, Kerr hit the winning shot after receiving an incredible pass from Jordan. In 1999, the Spurs acquired him and he got the chance to play under the legendary coach Gregg Popovich. Playing a superlative game throughout the season, the Spurs won their first NBA championship in the history of the league that year.
Despite the success they had in the previous season, Kerr was traded for the 2001-02 season to the Portland Trail Blazers. He played 65 games for the Blazers, scoring 4.1 points per game in average.
Kerr returned to San Antonio for what was to be his final season as a professional basketball player. He significantly contributed as the Spurs had yet another successful season and won the NBA championship for the second time.
Kerr retired with a record of playing 910 matches and scoring 6.0 points per game in average. In 1997, he won the NBA Three-Point Shootout championship. In his honour, the Arizona Wild Cats retired the no. 25 jersey. 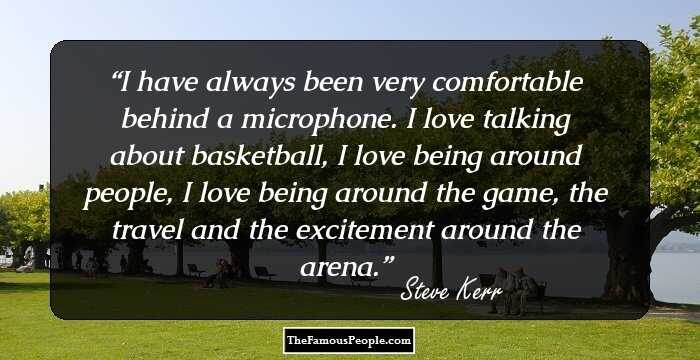 Intermediate Years
In 2003, shortly after his retirement, Steve Kerr joined the Turner Network Television (TNT) as a broadcast analyst. He served on the commentary team alongside Marv Albert. He also anchored a segment titled ‘Steve's Refreshing Thoughts’ in which he offered interesting trivia about the history of the sport. The segment was later named ‘Steve Wonders’. Furthermore, he served as an NBA commentator for Yahoo!
Continue Reading Below
He briefly quit television following his employment as general manager of the Suns but he made his return to TNT during the 2010-11 NBA season. Kerr also provided commentary for CBS and Turner Sports and often contributed to the sports website Grantland between 2011 and 2015.
In 2004, Kerr became one of the new owners of his old team, Phoenix Suns. In June 2007, he was selected as the new general manager of the franchise. While he had an impressive career as a player and would go on to have an even more astounding tenure as a coach, his time as the GM of the Suns was disappointing.
He kept remaking the Suns’ roster and was actively involved in the management. However, the Suns continued to be one of the NBA teams without any championship wins, as it still does today.
He retired from his position as president and GM of the Suns on June 15, 2010, but kept his 1% share of the Suns until 2014.
Head Coach of Golden State Warriors
Steve Kerr joined the Golden State Warriors as the team’s head coach on May 14, 2014. The Warriors had not won an NBA championship since 1975 and the team’s divisional performance had been abysmal as well.
Kerr, upon his appointment, decided to make use of elements of the triangle offence, a playing method often employed by his Chicago Bulls coach Phil Jackson. The Warriors eventually won their first NBA title in 40 years when they defeated Cleveland Cavaliers in the NBA finals.
In July 2015, he had to undergo a back surgery after having issues since the 2015 NBA finals. However, the surgery proved to be unsuccessful as it set off a fluid leak in his spine. He subsequently underwent a second surgery in September that year. He chose Luke Walton, a former player and one of his assistants, as the interim head coach of the Warriors.
The choice proved to be a good one as the Warriors had a 39-4 record under Walton in the 2015-16 season before Kerr came back. That season, the Warriors made it to the NBA finals and faced the Cavaliers once more. However, this time, the Cavaliers prevailed.
He was fined $25,000 by the NBA governing body on November 20, 2016, after he publicly criticised NBA officials while he was on a radio show with KNBR 680 on 17 November.
Kerr’s Warriors defeated the Cavaliers in the NBA finals in 2017 and 2018 as well. He has been named NBA All-Star Game head coach twice, in 2015 and 2017, and received Rudy Tomjanovich Award in 2018. 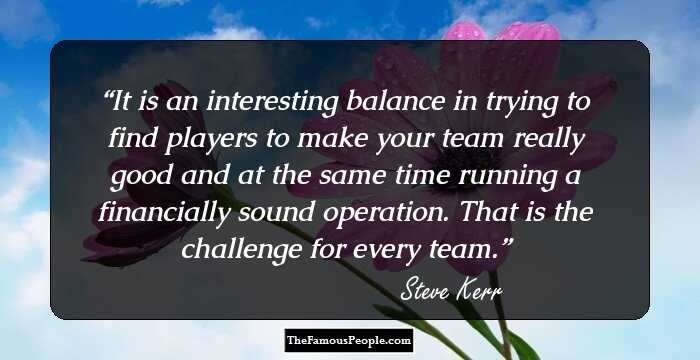 Personal Life
Steve Kerr met his future wife, Margot, in 1985. They were both students at the University of Arizona and a mutual friend set them up on a blind date. After dating for nearly five years, the couple married on September 15, 1990. They have three children together, two sons, Nick and Matthew, and one daughter, Madeleine.
Kerr is a close family friend of actress Julie Davenport.

See the events in life of Steve Kerr in Chronological Order