Advanced Search
Stephen “Steve” Allen was an American television personality who was best known for revolutionizing the concept of television talk shows when he became the first host of ‘The Tonight Show’. The multifaceted personality first started his career as a radio presenter before moving on to television. He is also a talented musician and has composed thousands of songs—more than 14,000 to be specific. Over his long and productive career spanning over five decades, he has presented many radio shows, hosted talk shows and game shows on television, worked as a comedian, composed music, played the piano, authored several books and also appeared in some films. Much loved and respected for his versatility, he is best known for his television career. Born to a famous comedienne, the show business was just a natural choice for the active young boy. He inherited his charisma and sense of humour from his mother who was once credited to be “the funniest woman in vaudeville." He shot to national recognition when he was asked to fill in as a guest host on ‘Arthur Godfrey's Talent Scouts’ and ended up presenting a comic routine that had the audience rolling with laughter. This launched him in his career as a highly successful entertainer and television personality. American Celebrities
Talk Show Hosts
Film & Theater Personalities
American Men
Male Tv Presenters
Childhood & Early Life
He was the son of Billy and Isabelle Allen. His mother was a successful vaudeville comedian who performed under the name Belle Montrose. He inherited his entertaining skills from his mother.
He enrolled at the Arizona State Teachers College but quit before he finished his studies to enlist in the U.S. Army during World War II. 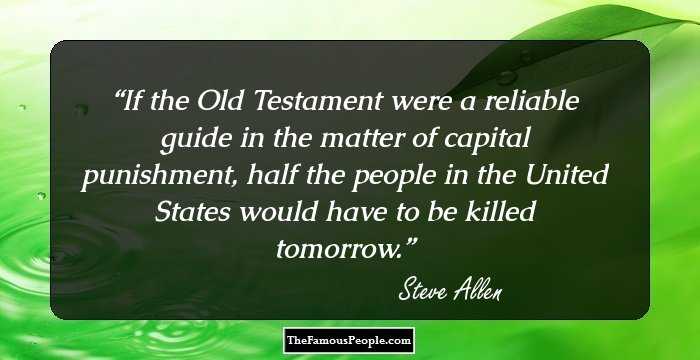 Continue Reading Below
Career
He became an announcer for KFAC in Los Angeles. In 1946 he joined Mutual Broadcasting System and began hosting a comedy show called ‘Smile Time’.
With time he began to experiment with the formats of his shows. He took up a job with CBS Radio to host a music and talk show. Gradually he converted it into a late-night talk show which made him popular. By 1950 his show was one of the most loved radio shows.
In 1949 he saw an advertisement inviting television presenters for professional wrestling. In spite of having little knowledge about the sport, he applied and got the job.
CBS television recognized the young man’s potential and believed that he could be groomed to do better. He was made the host of ‘The Steve Allen Show’ which premiered on Christmas Day, 1950.
He became very popular when he was called to fill in as a guest host for ‘Arthur Godfrey’s Talent Scouts’. He turned a live commercial for tea into a comedy routine by preparing tea and soup and pouring both into a ukulele.
From 1953 he appeared regularly on the game show, ‘What’s My Line?’ and also served as a panelist after Fred Allen died. He continued with the series till its end in 1967.
In 1954 he became the host of the talk show, ‘Tonight Starring Steve Allen’ which was the first version of what was to become known as ‘The Tonight Show’. The show was a highly popular and achieved long term success. He was with the show till 1957.
He began hosting ‘The Steve Allen Show’ in 1956. It was a variety show and ran till 1960 on NBC. Afterwards it was run in syndicated form from 1962 to 1964. It was a critically praised, award winning show.
From 1964 to 1973 he hosted the panel game show, ‘I’ve Got a Secret’ which was produced by Mark Goodson and Bill Todman. He also composed music for the show.
Continue Reading Below
He produced the PSB series, ‘Meeting of Minds’ from 1977 to 1981. In the show actors played the part of notable historical figures and were interviewed by Allen. The show won many awards for its ingenuity and he regarded it as his favourite shows.
He was the author of several books on comedy including ‘Dumbth’. He also wrote on religion, notably, ‘Steve Allen on the Bible, Religion and Morality’. He was an outspoken critic of organized religion.
He was a music composer who had thousands of songs to his credit. He often wrote music and lyrics for Broadway musicals and films. 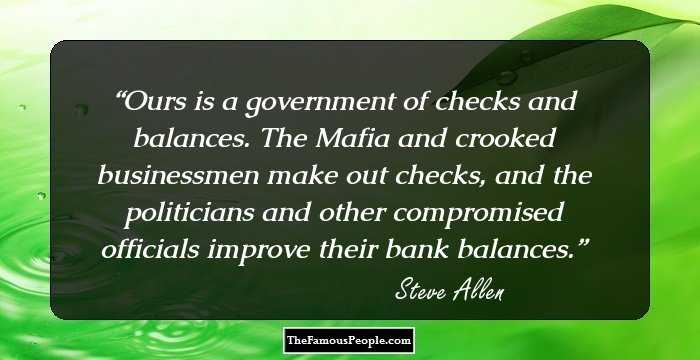 Major Works
He is most famous for being the first host of the late-night talk show, ‘The Tonight Show’. He is credited with originating the ideas of an opening monologue, celebrity interviews, comedy bits and audience involvement which later on were adopted by several other shows.
‘The Steve Allen Show’ was another one of his highly popular shows. The variety show helped to launch the careers of cast members like Don Knotts, Tom Poston and Bill Dana. Through this show, Allen also encouraged a lot of musicians.
Awards & Achievements
‘The Steve Allen Show’ won a Peabody Award in 1958 for its "genuine humor and frank experiments".
As a musician he won the Grammy award for best jazz composition in 1963 for his song ‘The Gravy Waltz’.
In 1998 he was presented with the Rose Elizabeth Bird Commitment to Justice Award from Death Penalty Focus. 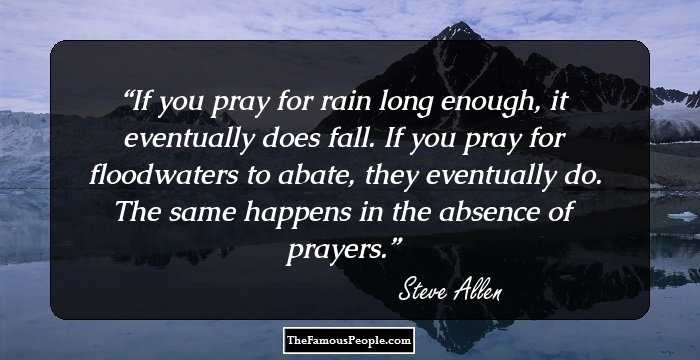 Quotes: You
Personal Life & Legacy
He married Dorothy Goodman in 1943 and had three sons. The marriage ended in 1952.
In 1954 he tied the knot for the second time with actress Jayne Meadows. They had one son. They remained married for more than four decades till his death.
He was involved in a minor car accident in 2000. Since there were no external injuries he had not been worried. However, the shock from the accident caused him to have a massive heart attack and he died. He was 78 years old.

Quotes By Steve Allen | Quote Of The Day | Top 100 Quotes

See the events in life of Steve Allen in Chronological Order